Widukind is also a Dutch fraternity located in Nijmegen which was founded in 1945.

Widukind (8th/9th centuries; modernized name Wittekind) was a pagan Saxon
Saxons
The Saxons were a confederation of Germanic tribes originating on the North German plain. The Saxons earliest known area of settlement is Northern Albingia, an area approximately that of modern Holstein...
leader and the chief opponent of Charlemagne
Charlemagne
Charlemagne was King of the Franks from 768 and Emperor of the Romans from 800 to his death in 814. He expanded the Frankish kingdom into an empire that incorporated much of Western and Central Europe. During his reign, he conquered Italy and was crowned by Pope Leo III on 25 December 800...
during the Saxon Wars
Saxon Wars
The Saxon Wars were the campaigns and insurrections of the more than thirty years from 772, when Charlemagne first entered Saxony with the intent to conquer, to 804, when the last rebellion of disaffected tribesmen was crushed. In all, eighteen battles were fought in what is now northwestern Germany...
. Widukind was the leader of the Saxons against the Frankish king Charlemagne (later emperor of the West). In 782, when Charlemagne organized Saxony as a Frankish province and ordered forced conversion of the pagan Saxons of Widukind, the Saxons resumed warfare against the Franks. In later times, Widukind became a symbol of Saxon independence and a figure of legend.

Very little is known about Widukind's life. All sources about him stem from his enemies, the Franks
Franks
The Franks were a confederation of Germanic tribes first attested in the third century AD as living north and east of the Lower Rhine River. From the third to fifth centuries some Franks raided Roman territory while other Franks joined the Roman troops in Gaul. Only the Salian Franks formed a...
, who painted a negative picture of Widukind, calling him an "insurgent" and a "traitor". He was mentioned first in 777, when he was the only one of the Saxon nobles not to appear at Charlemagne's court in Paderborn
Paderborn
Paderborn is a city in North Rhine-Westphalia, Germany, capital of the Paderborn district. The name of the city derives from the river Pader, which originates in more than 200 springs near Paderborn Cathedral, where St. Liborius is buried.-History:...
. Instead, he stayed with the Danish king Siegfried
Sigfred
Sigfred was possibly the second official king of Denmark whose reign started no later than the 770s and ended around 800. The precise dates remains unknown....
(possibly Sigurd Ring
Sigurd Ring
Sigurd Hring was a Swedish and Danish king mentioned in many old Scandinavian legends. According to Bósa saga ok Herrauds, there was once a saga on Sigurd Hring, but this saga is now lost...
).

In 778, Widukind led battles against the Franks, while Charlemagne was busy in Spain. From 782 through 784, annual battles between Saxons and Franks occurred. While Widukind was considered the leader of the Saxon resistance by the Franks, his exact role in the military campaigns is unknown. Even though Widukind allied himself with the Frisians
Frisians
The Frisians are a Germanic ethnic group native to the coastal parts of the Netherlands and Germany. They are concentrated in the Dutch provinces of Friesland and Groningen and, in Germany, East Frisia and North Frisia, that was a part of Denmark until 1864. They inhabit an area known as Frisia...
, Charlemagne's winter attacks of 784/785 were successful, and Widukind and his allies were pushed back beyond the River Elbe
Elbe
The Elbe is one of the major rivers of Central Europe. It rises in the Krkonoše Mountains of the northwestern Czech Republic before traversing much of Bohemia , then Germany and flowing into the North Sea at Cuxhaven, 110 km northwest of Hamburg...
. 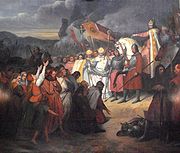 In the Bardengau
Bardengau
The Bardengau was a medieval county in the Duchy of Saxony. Its main town was Bardowick; other important towns were Lüneburg and Oldenstadt ....
in 785, Widukind agreed to surrender in return for a guarantee that no bodily harm would be done to him. Widukind and his allies were then baptized in Attigny
Attigny, Ardennes
Attigny is a commune on the river Aisne in the arrondissement of Vouziers in the département of Ardennes in the Champagne-Ardenne region in northern France.-Councils of Attigny:In 765, St...
in 785, with Charlemagne as his godfather
Godparent
A godparent, in many denominations of Christianity, is someone who sponsors a child's baptism. A male godparent is a godfather, and a female godparent is a godmother...
.

There are no sources about Widukind's life or death after his baptism. It is assumed that he was imprisoned at a monastery
Monastery
Monastery denotes the building, or complex of buildings, that houses a room reserved for prayer as well as the domestic quarters and workplace of monastics, whether monks or nuns, and whether living in community or alone .Monasteries may vary greatly in size – a small dwelling accommodating only...
— a fate that happened to other rulers deposed by Charlemagne. Reichenau Abbey has been identified as a likely location where Widukind may have spent the rest of his life. Alternatively, Widukind may have received a position in the administration of occupied Saxony.

Since the 9th century, Widukind had been idolized as a mythical hero. Around 1100, a tomb for him was made in Enger
Enger
Enger is a town in the Herford district, in North Rhine-Westphalia, Germany.-Geography:Enger is situated between the Teutoburg Forest and the Wiehen Hills, approx...
; recent excavations have found that the contents of the tomb are indeed early medieval, but it is impossible to decide whether the body is Widukind's. When in the 10th century Saxon kings (of the Ottonian
Ottonian
The Ottonian dynasty was a dynasty of Germanic Kings , named after its first emperor but also known as the Saxon dynasty after the family's origin. The family itself is also sometimes known as the Liudolfings, after its earliest known member Liudolf and one of its primary leading-names...
dynasty) replaced the Frankish kings in East Francia (the later Holy Roman Empire), these kings proudly claimed descent from Widukind: Matilda
Matilda of Ringelheim
Saint Mathilda was the wife of King Henry I of Germany, the first ruler of the Saxon Ottonian dynasty, thereby Duchess consort of Saxony from 912 and German Queen from 919 until 936. Their eldest son Otto succeeded his father as German King and was crowned Holy Roman Emperor in 962...
, the wife of King Henry I, was apparently a great-great-great-granddaughter of Widukind. The House of Billung, to which several Dukes of Saxony belonged, had Matilda's sister among its ancestors and thus also claimed descent from Widukind.

Numerous legends developed around Widukind's life; he eventually appeared as a saintly figure (becoming "Blessed Widukind") and the builder of many churches. He was later assumed to have died in 808; his feast day is commemorated on January 6.

According to legend, Widukind experienced a vision that led to his conversion. Disguised as a beggar, he was spying on Charlemagne's troop camp during Easter. He witnessed a priest performing a Holy Sacrifice of the Mass and the priest was holding a beautiful child during the consecration. To his astonishment, people would receive communion and the priest would give the same child to each person. Widukind was dumbfounded by this scenario and went to beg outside, following the end of the mass. One of the emperor's servants recognized Widukind behind his disguise – due to an odd formation of one of his fingers – and Widukind was captured. He was interrogated and confessed to spying on Charlemagne's camp for the purpose of becoming better acquainted with the Christian faith. He later confessed the divine vision he had seen. The emperor concluded that God had given Widukind the grace of witnessing the divine child, Jesus, behind the Sacred Host of the Mass. Widukind then renounced his worship of pagan idols.

According to myth, Widukind rode a black horse before his baptism and a white horse afterwards. A white or black horse can be found on many flags and coats of arms in England, Germany (state
States of Germany
Germany is made up of sixteen which are partly sovereign constituent states of the Federal Republic of Germany. Land literally translates as "country", and constitutionally speaking, they are constituent countries...
flags of North Rhine-Westphalia
North Rhine-Westphalia
North Rhine-Westphalia is the most populous state of Germany, with four of the country's ten largest cities. The state was formed in 1946 as a merger of the northern Rhineland and Westphalia, both formerly part of Prussia. Its capital is Düsseldorf. The state is currently run by a coalition of the...
and Lower Saxony
Lower Saxony
Lower Saxony is a German state situated in north-western Germany and is second in area and fourth in population among the sixteen states of Germany...
, Herford
Herford (district)
Herford is a Kreis in the northeastern part of North Rhine-Westphalia, Germany. Neighboring districts are Minden-Lübbecke, Lippe, the urban district of Bielefeld, and the districts Gütersloh and Osnabrück.-History:...
coat of arms), and the Netherlands (flag of Twente
Twente
Twente is a non-administrative region in the eastern Netherlands. It encompasses the most urbanised and easternmost part of the province of Overijssel...
).