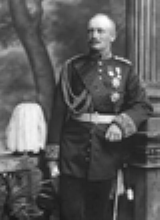 Born in Dresden
Dresden
Dresden is the capital city of the Free State of Saxony in Germany. It is situated in a valley on the River Elbe, near the Czech border. The Dresden conurbation is part of the Saxon Triangle metropolitan area....
, Frederick Augustus was the son of King George of Saxony
George of Saxony
-Life:George was born in the Saxon capital Dresden. He was the second son of King John of Saxony and his wife Princess Amelia of Bavaria , daughter of King Maximilian I Joseph of Bavaria ....
(1832–1904) and his wife Maria Anna
Maria Anna of Portugal
Infanta Maria Ana of Portugal was a Portuguese infanta , the eldest surviving daughter of Queen Maria II of Portugal and her...
, Infanta of Portugal
Portugal
Portugal , officially the Portuguese Republic is a country situated in southwestern Europe on the Iberian Peninsula. Portugal is the westernmost country of Europe, and is bordered by the Atlantic Ocean to the West and South and by Spain to the North and East. The Atlantic archipelagos of the...
(1843–1884).

He was an older brother of Princess Maria Josepha of Saxony
Princess Maria Josepha of Saxony
Princess Maria Josepha of Saxony was the mother of Emperor Charles I of Austria and the fifth child of George of Saxony and Infanta Maria Anna of Portugal.-Early life:...
. His maternal first cousins included (among others) Carlos I of Portugal
Carlos I of Portugal
-Assassination:On 1 February 1908 the royal family returned from the palace of Vila Viçosa to Lisbon. They travelled by train to Barreiro and, from there, they took a steamer to cross the Tagus River and disembarked at Cais do Sodré in central Lisbon. On their way to the royal palace, the open...
, Infante Afonso, Duke of Porto
Infante Afonso, Duke of Porto
Afonso Henriques, Prince Royal of Portugal was a Portuguese prince of the House of Braganza, the son of King Luis I of Portugal and his wife, Maria Pia of Savoy.-Biography:...
, Prince Wilhelm of Hohenzollern-Sigmaringen and Ferdinand I of Romania
Ferdinand I of Romania
Ferdinand was the King of Romania from 10 October 1914 until his death.-Early life:Born in Sigmaringen in southwestern Germany, the Roman Catholic Prince Ferdinand Viktor Albert Meinrad of Hohenzollern-Sigmaringen, later simply of Hohenzollern, was a son of Leopold, Prince of...
.

Frederick Augustus served in the Royal Saxon Army before becoming king, and later was promoted to Generalfeldmarschall
Generalfeldmarschall
Field Marshal or Generalfeldmarschall in German, was a rank in the armies of several German states and the Holy Roman Empire; in the Austrian Empire, the rank Feldmarschall was used...
. He abdicated as king on 13 November 1918, after the defeat of the German Empire
German Empire
The German Empire refers to Germany during the "Second Reich" period from the unification of Germany and proclamation of Wilhelm I as German Emperor on 18 January 1871, to 1918, when it became a federal republic after defeat in World War I and the abdication of the Emperor, Wilhelm II.The German...
in World War I
World War I
World War I , which was predominantly called the World War or the Great War from its occurrence until 1939, and the First World War or World War I thereafter, was a major war centred in Europe that began on 28 July 1914 and lasted until 11 November 1918...
. He died in Sibyllenort (now Szczodre
Szczodre
Szczodre is a village in the administrative district of Gmina Długołęka, within Wrocław County, Lower Silesian Voivodeship, in south-western Poland. Prior to 1945 it was in Germany....
) in Lower Silesia
Province of Lower Silesia
The Province of Lower Silesia was a province of the Free State of Prussia from 1919 to 1945. Between 1938 and 1941 it was reunited with Upper Silesia as the Silesia Province. The capital of Lower Silesia was Breslau...
and was buried in Dresden.

Frederick Augustus entered the Royal Saxon Army in 1877 as a second lieutenant
Second Lieutenant
Second lieutenant is a junior commissioned officer military rank in many armed forces.- United Kingdom and Commonwealth :The rank second lieutenant was introduced throughout the British Army in 1871 to replace the rank of ensign , although it had long been used in the Royal Artillery, Royal...
, despite being only twelve years old. Given his royal status, he advanced rapidly through the ranks. He served initially with the Royal Saxon 1. (Leib-) Grenadier Regiment Nr. 100. He was promoted to first lieutenant
First Lieutenant
First lieutenant is a military rank and, in some forces, an appointment.The rank of lieutenant has different meanings in different military formations , but the majority of cases it is common for it to be sub-divided into a senior and junior rank...
in 1883, captain in 1887, major
Major
Major is a rank of commissioned officer, with corresponding ranks existing in almost every military in the world.When used unhyphenated, in conjunction with no other indicator of rank, the term refers to the rank just senior to that of an Army captain and just below the rank of lieutenant colonel. ...
in 1889 and lieutenant colonel
Lieutenant colonel
Lieutenant colonel is a rank of commissioned officer in the armies and most marine forces and some air forces of the world, typically ranking above a major and below a colonel. The rank of lieutenant colonel is often shortened to simply "colonel" in conversation and in unofficial correspondence...
in 1891. By 1891, he was commander of the 1st Battalion of Schützen (Füsilier)-Regiment Nr. 108. He was promoted to colonel on 22 September 1892 and took command of the Schützen (Füsilier)-Regiment Nr. 108 on the same day. On 20 September 1894, the 29-year old prince was promoted to Generalmajor and given command of the 1st Royal Saxon Infantry Brigade Nr. 45 (Saxon higher units usually bore two numbers: one their Saxon Army number and the other their number in the Prussian Army order of battle). On 22 May 1898, he was promoted to Generalleutnant and given command of the 1st Royal Saxon Infantry Division Nr. 23
23rd Division (German Empire)
The 23rd Division , also known as the 1st Division No. 23 was a unit of the Saxon and then Imperial German Army. The division was headquartered in Dresden. The division was subordinated in peacetime to the XII Army Corps .The 1st Division No...
. He commanded this division until 26 August 1902, when he took command of the XII (1st Royal Saxon) Corps
XII (1st Royal Saxon) Corps
The XII Army Corps was a Saxon corps of the Imperial German Army. It was formed on April 1, 1867 and was headquartered in Dresden, Saxony....
. He was promoted to General der Infanterie one month later, on 24 September. He remained in command of the corps until October 1904, when he became king. His formal military career ended with his accession to the throne, but he was promoted subsequently to Generaloberst and then to Generalfeldmarschall (on 9 September 1912).

Frederick Augustus married Archduchess Luise, Princess of Tuscany
Archduchess Luise, Princess of Tuscany
Luise of Tuscany was a daughter of Ferdinand IV of Tuscany and his second wife, Alice of Bourbon-Parma, daughter of Duke Charles III and Louise...
, in Vienna
Vienna
Vienna is the capital and largest city of the Republic of Austria and one of the nine states of Austria. Vienna is Austria's primary city, with a population of about 1.723 million , and is by far the largest city in Austria, as well as its cultural, economic, and political centre...
on 21 November 1891. They were divorced in 1903 by the royal decree of the King after she ran away while pregnant with her last child. Luise's flight from Dresden was due to her father-in-law threatening to have her interned in Sonnestein Mental Asylum for life. Her brother supported her in her wish to escape Saxony. Emperor Franz-Josef of Austria-Hungary did not recognise the divorce.

They had seven children: