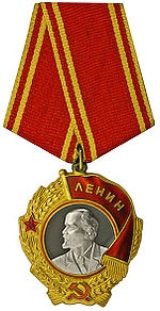 Encyclopedia
The Order of Lenin named after the leader
Vladimir Lenin
Vladimir Ilyich Lenin was a Russian Marxist revolutionary and communist politician who led the October Revolution of 1917. As leader of the Bolsheviks, he headed the Soviet state during its initial years , as it fought to establish control of Russia in the Russian Civil War and worked to create a...
of the Russian October Revolution
October Revolution
The October Revolution , also known as the Great October Socialist Revolution , Red October, the October Uprising or the Bolshevik Revolution, was a political revolution and a part of the Russian Revolution of 1917...
, was the highest decoration
Order (decoration)
An order or order of merit is a visible honour, awarded by a government, dynastic house or international organization to an individual, usually in recognition of distinguished service to a nation or to humanity. The distinction between orders and decorations is somewhat vague, except that most...
bestowed by the Soviet Union
Soviet Union
The Soviet Union , officially the Union of Soviet Socialist Republics , was a constitutionally socialist state that existed in Eurasia between 1922 and 1991....
. The order was awarded


From 1944 to 1957, before the institution of specific length of service medals, the Order of Lenin was also used to reward 25 years of conspicuous military service.

The order was established by the Central Executive Committee on April 6, 1930.


Design of the decoration

The first design of the Order of Lenin was made of silver with some lightly gold-plated features. It was a round badge with a central disc featuring Vladimir Lenin
Vladimir Lenin
Vladimir Ilyich Lenin was a Russian Marxist revolutionary and communist politician who led the October Revolution of 1917. As leader of the Bolsheviks, he headed the Soviet state during its initial years , as it fought to establish control of Russia in the Russian Civil War and worked to create a...
's profile surrounded by smokestacks, a tractor and a building, possibly a power plant. A thin red-enamelled border and a circle of wheat panicles surrounded the disc. At the top was a gold-plated "hammer and sickle
Hammer and sickle
The hammer and sickle is a part of communist symbolism and its usage indicates an association with Communism, a Communist party, or a Communist state. It features a hammer and a sickle overlapping each other. The two tools are symbols of the industrial proletariat and the peasantry; placing them...
" emblem, and at the bottom were the Russian initials for "USSR" (СССР) in red enamel. Only about 800 of this design were minted.

The second, final design was awarded in 1934 and onwards. This was a solid-gold badge, featuring an enamelled disc bearing Lenin's portrait . The disc is surrounded by two gold
Gold
Gold is a chemical element with the symbol Au and an atomic number of 79. Gold is a dense, soft, shiny, malleable and ductile metal. Pure gold has a bright yellow color and luster traditionally considered attractive, which it maintains without oxidizing in air or water. Chemically, gold is a...
en panicles of wheat
Wheat
Wheat is a cereal grain, originally from the Levant region of the Near East, but now cultivated worldwide. In 2007 world production of wheat was 607 million tons, making it the third most-produced cereal after maize and rice...
, and a red flag
Flag
A flag is a piece of fabric with a distinctive design that is usually rectangular and used as a symbol, as a signaling device, or decoration. The term flag is also used to refer to the graphic design employed by a flag, or to its depiction in another medium.The first flags were used to assist...
with "LENIN" in Cyrillic script (ЛЕНИН). A red star
Red star
A red star, five-pointed and filled, is an important ideological and religious symbol which has been used for various purposes, such as: state emblems, flags, monuments, ornaments, and logos.- Symbol of communism :...
is placed on the left and the "hammer and sickle" emblem at the bottom, both in red enamel.

The badge was originally worn by screwback on the left chest without ribbon. Later it was worn as a medal suspended from a red ribbon with pairs of yellow stripes at the edges (see image above). The ribbon bar
Ribbon bar
Ribbon bars are small decorations that are worn by military, police, and fire service personnel or by civilians. Ribbon bars are mainly used when wearing either full decoration, or when wearing medals is considered inappropriate or impractical. Each military force has its own rules on what ribbons...
is of the same design.

The portrait of Lenin was originally a riveted silver
Silver
Silver is a metallic chemical element with the chemical symbol Ag and atomic number 47. A soft, white, lustrous transition metal, it has the highest electrical conductivity of any element and the highest thermal conductivity of any metal...
piece. For a time it was incorporated into a one-piece gold badge, but finally returned as a separate platinum
Platinum
Platinum is a chemical element with the chemical symbol Pt and an atomic number of 78. Its name is derived from the Spanish term platina del Pinto, which is literally translated into "little silver of the Pinto River." It is a dense, malleable, ductile, precious, gray-white transition metal...
piece until the dissolution of the USSR in 1991.

The first Order of Lenin was awarded to the newspaper Komsomolskaya Pravda
Komsomolskaya Pravda
Komsomolskaya Pravda is a daily Russian tabloid newspaper, founded on March 13th, 1925. It is published by "Izdatelsky Dom Komsomolskaya Pravda" .- History :...
on 23 May 1930. Also among the first ten recipients were five industrial companies, three pilots, and the Secretary to the Central Executive Committee Avel Enukidze
Avel Enukidze
Avel Safronovich Enukidze - А́вель Сафронович Енуки́дзе - , a prominent "Old Bolshevik" and, at one point, a member of the Soviet Central Committee in Moscow...
. The first person to be awarded a second Order of Lenin was the pilot Valery Chkalov
Valery Chkalov
Valery Pavlovich Chkalov was a Russian aircraft test pilot and a Hero of the Soviet Union .-Early life:...
in 1936. Another pilot, Vladimir Kokkinaki
Vladimir Kokkinaki
Vladimir Konstantinovich Kokkinaki was a test pilot in the Soviet Union, setting twenty-two world records and serving as president of the Fédération Aéronautique Internationale.-Life and career:...
, became the first to receive a third Order in 1939.

The first five foreign recipients, a German and four Americans
United States
The United States of America is a federal constitutional republic comprising fifty states and a federal district...
(one of the Americans was Frank Bruno Honey—on May 17, 1932), received the award for helping in the reconstruction of Soviet industry and agriculture in 1931–1934.

The record for most Orders of Lenin received by a single person is held by Nikolay Patolichev, long-time Minister for Foreign Trade of the USSR, who was awarded 12 times. Other numerous repeat awardees are:


Among organisations and geographical objects, three Orders of Lenin were awarded to: