Encyclopedia
Belarusians; are an East Slavic
East Slavs
The East Slavs are Slavic peoples speaking East Slavic languages. Formerly the main population of the medieval state of Kievan Rus, by the seventeenth century they evolved into the Russian, Ukrainian, and Belarusian peoples.-Sources:...
ethnic group
Ethnic group
An ethnic group is a group of people whose members identify with each other, through a common heritage, often consisting of a common language, a common culture and/or an ideology that stresses common ancestry or endogamy...
who populate the majority of the Republic of Belarus. Introduced to the world as a new state in the early 1990s, the Republic of Belarus brought with it the notion of a re-emerging Belarusian ethnicity, drawn upon the lines of the Old Belarusian language spoken by the Ruthenian
Ruthenian
Ruthenian may refer to:*Ruthenia, a name applied to various parts of Eastern Europe*Ruthenians, a historic ethnic group*Ruthenian Catholic Church, the sui iuris particular church united to the Bishop of Rome and the Roman Catholic Church...
ethnic group that ruled (together with ancestors of today's Lithuanians
Lithuanians
Lithuanians are the Baltic ethnic group native to Lithuania, where they number around 2,765,600 people. Another million or more make up the Lithuanian diaspora, largely found in countries such as the United States, Brazil, Canada, Colombia, Russia, United Kingdom and Ireland. Their native language...
) the Grand Duchy of Lithuania
Grand Duchy of Lithuania
The Grand Duchy of Lithuania was a European state from the 12th /13th century until 1569 and then as a constituent part of Polish-Lithuanian Commonwealth until 1791 when Constitution of May 3, 1791 abolished it in favor of unitary state. It was founded by the Lithuanians, one of the polytheistic...
. However, after the creation of the Polish–Lithuanian Commonwealth, many of the Old Belarusian-speaking Ruthenian nobles
Ruthenian nobility
Ruthenian nobility can refer to:* Boyars* Ukrainian nobility * Belarusian nobility See also: Ruthenia, Ruthenians...
would be absorbed by the Polish szlachta in the West and, later, the Russian nobility
Russian nobility
The Russian nobility arose in the 14th century and essentially governed Russia until the October Revolution of 1917.The Russian word for nobility, Dvoryanstvo , derives from the Russian word dvor , meaning the Court of a prince or duke and later, of the tsar. A nobleman is called dvoryanin...
in the East, leaving only a small rural-dwelling population to be the propagators of a distinct non-literary Belarusian language
Belarusian language
The Belarusian language , sometimes referred to as White Russian or White Ruthenian, is the language of the Belarusian people...
up until its revival.
There are over 8 million people who associate themselves with the Belarusian nationality today.

Belarusians also form minorities in neighboring Poland (especially in the Białystok Voivodeship), Russia and Lithuania. At the beginning of 20th century Belarusians constituted a majority in the regions around Smolensk
Smolensk
Smolensk is a city and the administrative center of Smolensk Oblast, Russia, located on the Dnieper River. Situated west-southwest of Moscow, this walled city was destroyed several times throughout its long history since it was on the invasion routes of both Napoleon and Hitler. Today, Smolensk...
.

Noticeable numbers have emigrated to the United States, Brazil and Canada in the early 20th century. During Soviet times, many Belarusians were deported or migrated
Population transfer in the Soviet Union
Population transfer in the Soviet Union may be classified into the following broad categories: deportations of "anti-Soviet" categories of population, often classified as "enemies of workers," deportations of entire nationalities, labor force transfer, and organized migrations in opposite...
to various regions of the USSR, including Siberia
Siberia
Siberia is an extensive region constituting almost all of Northern Asia. Comprising the central and eastern portion of the Russian Federation, it was part of the Soviet Union from its beginning, as its predecessor states, the Tsardom of Russia and the Russian Empire, conquered it during the 16th...
, Kazakhstan and Ukraine.

Since the breakup of the USSR several hundred thousand have emigrated to the European Union, United States, Canada and Russia.

Belarusians show the characteristic R1a genes of the male ancestorship at 51%, similar to other East slav groups. Such large frequencies of R1a have been found only in East Europe and India.

Genetical studies show that genetically Belarusians have close genetical similarities with Poles, Russians and Ukrainians, which belong to the same group. A study of the Y chromosome in East Slavs groups shows that there is no significant variation in the Y chromosome between Belarusians, Poles, central-southern Russians and Ukrainians, and it is overlapped by their vast similarities, thus revealing an overwhelmingly shared patrilineal ancestry.

A genetic portrait of modern Belarusians documents A separation of subpopulations along the south-north line, which is demonstrated particularly in distribution of Y chromosomal lineages R1b, I1a and I1b, N3 and G-chromosomes, has been noted; east-west gradient is insignificant.

The name Belarus can be literally translated as White Ruthenia that is a historical region in the east of modern Republic of Belarus, known in Latin as Ruthenia Alba. This name was in use in the West for some time in history, together with White Ruthenes, White Russia
White Russia
White Russia or White Ruthenia is a name that has historically been applied to a part of the wider region of Ruthenia or Rus', most often to that which roughly corresponds to the eastern part of present-day Belarus including the cities of Polatsk, Vitsyebsk and Mahiliou. In English, the use of the...
ns (though not to be confused with the political group of White Russians that opposed the Bolshevik
Bolshevik
The Bolsheviks, originally also Bolshevists , derived from bol'shinstvo, "majority") were a faction of the Marxist Russian Social Democratic Labour Party which split apart from the Menshevik faction at the Second Party Congress in 1903....
s during the Russian Civil War
Russian Civil War
The Russian Civil War was a multi-party war that occurred within the former Russian Empire after the Russian provisional government collapsed to the Soviets, under the domination of the Bolshevik party. Soviet forces first assumed power in Petrograd The Russian Civil War (1917–1923) was a...
) and similar forms. Belarusians trace their name back to the people of Rus'. 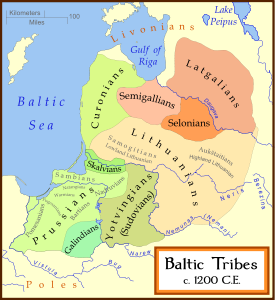 The Belarusian people trace their distinct culture to the Grand Duchy of Lithuania and earlier Kievan Rus and the Principality of Polatsk. Most Belarusians are descendants of the East Slav tribes Dregovichs
Dregovichs
The Dregoviches were one of the tribal unions of Early East Slavs, and inhabited the territories down the stream of the Pripyat River and northern parts of the right bank of the Dnieper river...
, Krivich
Krivich
The Krivichi was one of the tribal unions of Early East Slavs between the 6th and the 12th centuries. They migrated to the mostly Finnic areas in the upper reaches of the Volga, Dnieper, Western Dvina, areas south of the lower reaches of river Velikaya and parts of the Neman basin.-Etymology:Many...
s and Radimichs, as well as of a Baltic tribe
Balts
The Balts or Baltic peoples , defined as speakers of one of the Baltic languages, a branch of the Indo-European language family, are descended from a group of Indo-European tribes who settled the area between the Jutland peninsula in the west and Moscow, Oka and Volga rivers basins in the east...
of Jotvingians who lived in the west and north-west of today's Belarus.