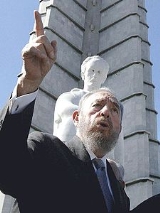 Overview
Fidel Alejandro Castro Ruz (fiˈðel ˈkastro; born August 13, 1926) is a Cuban revolutionary and politician, having held the position of Prime Minister of Cuba
Prime Minister of Cuba
Prime Minister of Cuba was a position in the government of Cuba. Fidel Castro assumed the position of Prime Minister in 1959 replacing José Miró Cardona....
from 1959 to 1976, and then President
President of Cuba
--209.174.31.28 18:43, 22 November 2011 The President of Cuba is the Head of state of Cuba. According to the Cuban Constitution of 1976, the President is the chief executive of the Council of State of Cuba...
from 1976 to 2008. He also served as the First Secretary
Secretary of the Communist Party of Cuba
The First Secretary of the Central Committee of the Communist Party of Cuba is the office of the leader of the Communist Party of Cuba, Cuba's ruling party since 1965...
of the Communist Party of Cuba
Communist Party of Cuba
The Communist Party of Cuba is the governing political party in Cuba. It is a communist party of the Marxist-Leninist model. The Cuban constitution ascribes the role of the Party to be the "leading force of society and of the state"...
from the party's foundation in 1961 until 2011. Politically a Marxist-Leninist
Marxism-Leninism
Marxism–Leninism is a communist ideology, officially based upon the theories of Marxism and Vladimir Lenin, that promotes the development and creation of a international communist society through the leadership of a vanguard party over a revolutionary socialist state that represents a dictatorship...
, under his administration the Republic of Cuba
Cuba
The Republic of Cuba is an island nation in the Caribbean. The nation of Cuba consists of the main island of Cuba, the Isla de la Juventud, and several archipelagos. Havana is the largest city in Cuba and the country's capital. Santiago de Cuba is the second largest city...
was converted into a one-party socialist state
Socialist state
A socialist state generally refers to any state constitutionally dedicated to the construction of a socialist society. It is closely related to the political strategy of "state socialism", a set of ideologies and policies that believe a socialist economy can be established through government...
, with industry and business being nationalised under state ownership and socialist
Socialism
Socialism is an economic system characterized by social ownership of the means of production and cooperative management of the economy; or a political philosophy advocating such a system. "Social ownership" may refer to any one of, or a combination of, the following: cooperative enterprises,...
reforms implemented in all areas of society.

1956    Fidel Castro declares himself at war with the President of Cuba.

1956    The ''Granma'' yacht reaches the shores of Cuba's Oriente province and Fidel Castro, Che Guevara and 80 other members of the 26th of July Movement disembark to initiate the Cuban Revolution.

1959    Fulgencio Batista, president of Cuba, is overthrown by Fidel Castro's forces during the Cuban Revolution.

1959    Fidel Castro's Cuban Revolution is completed with the takeover of Santiago de Cuba.

1960    Fidel Castro arrives in New York City as the head of the Cuban delegation to the United Nations.

1961    Bay of Pigs Invasion: A group of CIA financed and trained Cuban refugees lands at the Bay of Pigs in Cuba with the aim of ousting Fidel Castro.

This country is heaven, in the spiritual sense of the word. And I say, we prefer to die in heaven than survive in hell.

Speech made by Castro at Ernesto Guevara|Ernesto "Che" Guevara's memorial service on October 18, 1967.

When I was a young boy, my father taught me that to be a good Catholic, I had to confess at church if I ever had impure thoughts about a girl. That very evening, I had to rush to confess my sin. And the next night, and the next. After a week, I decided religion wasn't for me.