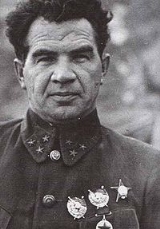 Born into a peasant family in the village of Serebryanye Prudy
Serebryanye Prudy
Serebryanye Prudy is an urban locality and the administrative center of Serebryano-Prudsky District of Moscow Oblast, Russia, located on the Osyotr River. Among the district centers of Moscow Oblast, it is the southernmost, and the farthest from Moscow...
, he joined the Red Army during the Russian Revolution of 1917
Russian Revolution of 1917
The Russian Revolution is the collective term for a series of revolutions in Russia in 1917, which destroyed the Tsarist autocracy and led to the creation of the Soviet Union. The Tsar was deposed and replaced by a provisional government in the first revolution of February 1917...
and later attended the Frunze Military Academy. Chuikov commanded the 4th Army in the Soviet invasion of Poland
Soviet invasion of Poland
Soviet invasion of Poland can refer to:* the second phase of the Polish-Soviet War of 1920 when Soviet armies marched on Warsaw, Poland* Soviet invasion of Poland of 1939 when Soviet Union allied with Nazi Germany attacked Second Polish Republic...
in 1939, and during the Russo-Finnish War of 1940. He was then sent to China
Republic of China
The Republic of China , commonly known as Taiwan , is a unitary sovereign state located in East Asia. Originally based in mainland China, the Republic of China currently governs the island of Taiwan , which forms over 99% of its current territory, as well as Penghu, Kinmen, Matsu and other minor...
as an advisor to Chiang Kai-shek
Chiang Kai-shek
Chiang Kai-shek was a political and military leader of 20th century China. He is known as Jiǎng Jièshí or Jiǎng Zhōngzhèng in Mandarin....
. In May 1942 the USSR recalled their military advisor, according to Chuikov's memoirs this was due to Nationalist China claiming the USSR was providing military aid as part of an attempt to draw the USSR into the Second Sino-Japanese War
Second Sino-Japanese War
The Second Sino-Japanese War was a military conflict fought primarily between the Republic of China and the Empire of Japan. From 1937 to 1941, China fought Japan with some economic help from Germany , the Soviet Union and the United States...
.

On returning to Moscow, Chuikov was placed in command of the 64th Army (later 7th Guards)
7th Guards Army
The Red Army's 7th Guards Army was re-designated from the Soviet 64th Army on April 16, 1943.64th Army had originally been formed from 1st Reserve Army in July 1942, and alongside the 62nd Army, fought the German offensive during the Battle of Stalingrad to a standstill, for which it was raised to...
, on the West bank of the Don river. The 64th Army took part in the fighting withdrawal to Stalingrad, and shortly before the Battle of Stalingrad
Battle of Stalingrad
The Battle of Stalingrad was a major battle of World War II in which Nazi Germany and its allies fought the Soviet Union for control of the city of Stalingrad in southwestern Russia. The battle took place between 23 August 1942 and 2 February 1943...
itself began, Chuikov was made commanding general of the more important 62nd Army
62nd Army (Soviet Union)
The 62nd Order of Lenin Army was a field army established by the Soviet Union's Red Army during the Second World War. Formed as the 7th Reserve Army as part of the Stavka Reserve in May 1942, the formation was designated as the 62nd Rifle Army the following month...
, which was to hold Stalingrad itself, with the 64th on its Southern flank.

It was at Stalingrad that Chuikov developed the important tactic of “hugging the enemy,” by which under-armed Soviet soldiers kept the German army so close to them as to minimize the superior firepower enjoyed by the Wehrmacht. Chuikov had witnessed firsthand the Blitzkrieg
Blitzkrieg
For other uses of the word, see: Blitzkrieg Blitzkrieg is an anglicized word describing all-motorised force concentration of tanks, infantry, artillery, combat engineers and air power, concentrating overwhelming force at high speed to break through enemy lines, and, once the lines are broken,...
tactics the Nazis had used to sweep across the Russian steppe, so he used the Germans' carpet-bombing
Carpet bombing
Carpet bombing is a large aerial bombing done in a progressive manner to inflict damage in every part of a selected area of land. The phrase invokes the image of explosions completely covering an area, in the same way that a carpet covers a floor. Carpet bombing is usually achieved by dropping many...
of the city to draw panzer units
Panzer Division
A panzer division was an armored division in the army and air force branches of the Wehrmacht as well as the Waffen-SS of Nazi Germany during World War II....
into the rubble and chaos where their progress was impeded. Here they could be destroyed with Molotov cocktail
Molotov cocktail
The Molotov cocktail, also known as the petrol bomb, gasoline bomb, Molotov bomb, fire bottle, fire bomb, or simply Molotov, is a generic name used for a variety of improvised incendiary weapons...
s and Russian artillery operating at close range. This tactic also rendered the German Luftwaffe ineffective, since Stuka dive-bombers could not attack Red Army positions without firing upon their own forces.

Chuikov's advance through Poland was characterized by massive advances across difficult terrain (on several occasions, the 8th Guards Army advanced over 40 miles in a single day). On May 1, 1945, Chuikov, who commanded his army operating in central Berlin, was the first Allied officer to learn about Adolf Hitler
Adolf Hitler
Adolf Hitler was an Austrian-born German politician and the leader of the National Socialist German Workers Party , commonly referred to as the Nazi Party). He was Chancellor of Germany from 1933 to 1945, and head of state from 1934 to 1945...
's suicide, being informed by General Hans Krebs
Hans Krebs (general)
Hans Krebs was a German Army general of infantry who served during World War II.-Early life:Krebs was born in Helmstedt. He volunteered for service in the Imperial German Army in 1914, was promoted to lieutenant in 1915, and to first lieutenant in 1925...
who came to Chuikov's headquarters under a white flag
White flag
White flags have had different meanings throughout history and depending on the locale.-Flag of temporary truce in order to parley :...
. He accepted the surrender of Berlin's forces from General Helmuth Weidling
Helmuth Weidling
Helmuth Otto Ludwig Weidling was an officer in the German Army before and during World War II...
.

Foreign
Awards of other countries

Memoirs by Vasili Chuikov: Сражение века Battle of the Century – Describes his experiences during the Battle of Stalingrad. Memoirs by Vasili Chuikov: Конец третьего рейха The End of the Third Reich – Describes his experiences during the last months of the war, ending with the Battle of Berlin. Biography on the website dedicated to the Heroes of the Soviet Union/Russia.
The source of this article is wikipedia, the free encyclopedia.  The text of this article is licensed under the GFDL.