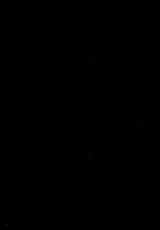 Encyclopedia
The National and Kapodistrian University of Athens , usually referred to simply as the University of Athens, is the oldest university
University
A university is an institution of higher education and research, which grants academic degrees in a variety of subjects. A university is an organisation that provides both undergraduate education and postgraduate education...
in Southeast Europe
Southeast Europe
Southeast Europe or Southeastern Europe is a relatively recent political designation for the states of the Balkans. Writers such as Maria Todorova and Vesna Goldsworthy have suggested the use of the term Southeastern Europe to replace the word Balkans for the region, to minimize potential...
and has been in continuous operation since its establishment in 1837. Today, it is the second-largest institution of higher learning in Greece
Greece
Greece , officially the Hellenic Republic , and historically Hellas or the Republic of Greece in English, is a country in southeastern Europe....
, with more than fifty thousand undergraduate students. It is one of the top ranking universities in Greece, and ranked 177th in the world according to the Times Higher Education-QS World University Rankings 2009.

The National and Kapodistrian University of Athens was founded on May 3, 1837, and was housed in the residence
Athens University Museum
The Athens University Museum is a museum in Plaka, Athens, Greece.The building was a structure of the Ottoman period but fundamentally restructured between 1831 and 1833 by Stamatios Kleanthis and Eduard Schaubert for their architectural office. From 1837 to 1841 it housed the newly founded...
of architects Stamatis Kleanthes and Eduard Schaubert, on the north east slopes of the Acropolis
Acropolis
Acropolis means "high city" in Greek, literally city on the extremity and is usually translated into English as Citadel . For purposes of defense, early people naturally chose elevated ground to build a new settlement, frequently a hill with precipitous sides...
. It was the first University not only in the newly established Greek State but in all the Balkans
Balkans
The Balkans is a geopolitical and cultural region of southeastern Europe...
and the Eastern Mediterranean in general.

Before it was renamed to honour Ioannis Kapodistrias
Ioannis Kapodistrias
Count Ioannis Antonios Kapodistrias |Academy of Athens]] Critical Observations about the 6th-Grade History Textbook"): "3.2.7. Σελ. 40: Δεν αναφέρεται ότι ο Καποδίστριας ήταν Κερκυραίος ευγενής." "...δύο ιστορικούς της Aκαδημίας κ.κ...
, the first head of state of independent modern Greece, the university was known as the Othonian University after King Otto
Otto of Greece
Otto, Prince of Bavaria, then Othon, King of Greece was made the first modern King of Greece in 1832 under the Convention of London, whereby Greece became a new independent kingdom under the protection of the Great Powers .The second son of the philhellene King Ludwig I of Bavaria, Otto ascended...
and consisted of four faculties; theology, law, medicine and arts (which included applied sciences and mathematics). It had 33 professors, 52 students and 75 non-matriculated “auditors”. In November 1841, classes began in a new building designed by the Danish architect Christian Hansen
Christian Hansen (architect)
Hans Christian Hansen was a Historicist Danish architect who worked 18 years in Greece where he was active in the transformation of Athens from a small town to the country's capital and an international metropolis...
. The Propylaea (37°58′51"N 23°44′02"E) was designed by Hansen younger brother, Theophil Hansen in 1859 but the building project was not completed until 1885.

In this first and “heroic” period for Greek education, the university faculty made great efforts to fill the gap between their newly founded institution and older ones in other countries.

Between 1895 and 1911, an average of one thousand new students entered the faculties each year, a figure which rose to two thousand at the end of World War I
World War I
World War I , which was predominantly called the World War or the Great War from its occurrence until 1939, and the First World War or World War I thereafter, was a major war centred in Europe that began on 28 July 1914 and lasted until 11 November 1918...
. This led to the decision to introduce entrance examinations for all the faculties, beginning in the academic year 1927-28. Since 1954 the number of students admitted each year has been fixed by the Ministry of Education and Religion, on the proposal of the faculties.

In the 1960s construction work began on the University Campus in the suburb of Ilissia. The Ilissia campus now houses the Schools of Philosophy, Theology and Sciences.

The University of Athens is divided into schools, faculties and departments as follows. The naming is nοt consistent in English for historical reasons, but in Greek the largest divisions are generally named “σχολές” (schools) and are divided in “τμήματα” (faculties), furthermore subdivided in “τομείς” (departments). 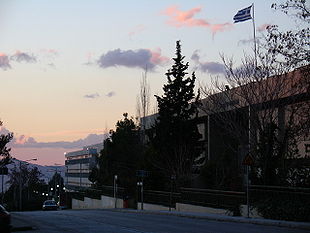 The main campus is at Ilissia
Ilissia
- Notable people :*Nikko Patrelakis, musician...
(Zografou
Zografou
Zografou is a suburb in the eastern part of Athens, Greece. It is located about 5 km from downtown Athens, 2 km SW of Katechaki Avenue, 4 km from the Hymettus Ring forming part of the Attiki Odos private superhighway network, and 3 km E of Kifissias Avenue...
). There the faculties of Science, Theology and Philosophy are situated. The faculty of Life Sciences is located at Goudi
Goudi
Goudi is a residential neighbourhood of Athens, Greece, on the eastern part of town and on the foothills of Mount Hymettus. Its name descends from the 19th century Goudi family, who owned a large estate in the area...
and the faculty of Physical Education and Sports Science is located at Daphne
Dafni (Athens), Greece
Dafni, sometimes called Daphne, is a suburb of Athens, Greece. Since the 2011 local government reform it is part of the municipality Dafni-Ymittos, of which it is the seat and a municipal unit....
. The faculties of Media, Education, Economics, Law and Public Administration are housed in various buildings at the centre of Athens, along with various administration facilities. University administration was initially housed in a historical neoclassical building at the center of Athens, Panepistimiou avenue
Panepistimiou Street
Panepistimiou Street is a major street in Athens that runs one way for non-transit vehicles since 2002 from Amalias Avenue, Syntagma Square and Vassilissis Sofias Avenue to Omonoia Square in which is now a pedestrian crossing and before an intersection...
, but was relocated at the main university campus later.

Research in the University of Athens covers almost all research interests. Research in the University of Athens is intimately linked with that conducted in the hospitals and research institutes of the metropolitan area, including the National Research Center for Physical Sciences Demokritos, the National Research Foundation (EIE), the National Observatory of Athens
National Observatory of Athens
The National Observatory of Athens is a research institute in Athens, Greece. Founded in 1842, it is the oldest research foundation in Greece, as it was the first scientific research institute built after Greece became independent in 1829, and one of the oldest research institutes in Southern...
, the Hellenic Pasteur Institute
Pasteur Institute
The Pasteur Institute is a French non-profit private foundation dedicated to the study of biology, micro-organisms, diseases, and vaccines. It is named after Louis Pasteur, who made some of the greatest breakthroughs in modern medicine at the time, including pasteurization and vaccines for anthrax...
, the Alexander Fleming Biomedical Sciences Research Center
Alexander Fleming Biomedical Sciences Research Center
The Biomedical Sciences Research Center "Alexander Fleming" is a non-profit research organisation based in Vari, Athens, Greece. The Center is named after the scientist Alexander Fleming....
, the Athens High Performance Computing Laboratory, the National Centre for Marine Research (NCMR) and the Foundation for Biomedical Research of the Academy of Athens (BRFAA). Research conducted in the institutes of the metropolitan area of Athens
Athens
Athens , is the capital and largest city of Greece. Athens dominates the Attica region and is one of the world's oldest cities, as its recorded history spans around 3,400 years. Classical Athens was a powerful city-state...
accounted for over 50% of the ISI
Institute for Scientific Information
The Institute for Scientific Information was founded by Eugene Garfield in 1960. It was acquired by Thomson Scientific & Healthcare in 1992, became known as Thomson ISI and now is part of the Healthcare & Science business of the multi-billion dollar Thomson Reuters Corporation.ISI offered...
-indexed scientific publications coming from Greece
Greece
Greece , officially the Hellenic Republic , and historically Hellas or the Republic of Greece in English, is a country in southeastern Europe....
in 2004.