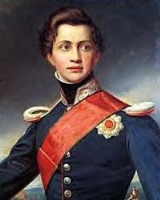 Overview
Otto, Prince of Bavaria, then Othon, King of Greece was made the first modern King of Greece
Kingdom of Greece
The Kingdom of Greece was a state established in 1832 in the Convention of London by the Great Powers...
in 1832 under the Convention of London
London Conference of 1832
The London Conference of 1832 was an international conference convened to establish a stable government in Greece. Negotiations between the three Great Powers resulted in the establishment of the Kingdom of Greece under a Bavarian Prince. The decisions were ratified in the Treaty of Constantinople...
, whereby Greece
Greece
Greece , officially the Hellenic Republic , and historically Hellas or the Republic of Greece in English, is a country in southeastern Europe....
became a new independent kingdom under the protection of the Great Powers (the United Kingdom
United Kingdom of Great Britain and Ireland
The United Kingdom of Great Britain and Ireland was the formal name of the United Kingdom during the period when what is now the Republic of Ireland formed a part of it....
, France
July Monarchy
The July Monarchy , officially the Kingdom of France , was a period of liberal constitutional monarchy in France under King Louis-Philippe starting with the July Revolution of 1830 and ending with the Revolution of 1848...
and the Russian Empire
Russian Empire
The Russian Empire was a state that existed from 1721 until the Russian Revolution of 1917. It was the successor to the Tsardom of Russia and the predecessor of the Soviet Union...
).

Otton is a name granted as a 'grace and favour' does any one know anything about this.
More
x