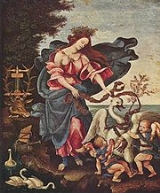 Overview
Music is an art
Art
Art is the product or process of deliberately arranging items in a way that influences and affects one or more of the senses, emotions, and intellect....
form whose medium
Media (arts)
In the arts, a media or medium is a material used by an artist or designer to create a work.-Architecture:In the art and science of architecture, the design and construction of buildings and interiors, infrastructure and other physical structures are created...
is sound
Sound
Sound is a mechanical wave that is an oscillation of pressure transmitted through a solid, liquid, or gas, composed of frequencies within the range of hearing and of a level sufficiently strong to be heard, or the sensation stimulated in organs of hearing by such vibrations.-Propagation of...
and silence. Its common elements are pitch
Pitch (music)
Pitch is an auditory perceptual property that allows the ordering of sounds on a frequency-related scale.Pitches are compared as "higher" and "lower" in the sense associated with musical melodies,...
(which governs melody
Melody
A melody , also tune, voice, or line, is a linear succession of musical tones which is perceived as a single entity...
and harmony
Harmony
In music, harmony is the use of simultaneous pitches , or chords. The study of harmony involves chords and their construction and chord progressions and the principles of connection that govern them. Harmony is often said to refer to the "vertical" aspect of music, as distinguished from melodic...
), rhythm
Rhythm
Rhythm may be generally defined as a "movement marked by the regulated succession of strong and weak elements, or of opposite or different conditions." This general meaning of regular recurrence or pattern in time may be applied to a wide variety of cyclical natural phenomena having a periodicity or...
(and its associated concepts tempo
Tempo
In musical terminology, tempo is the speed or pace of a given piece. Tempo is a crucial element of any musical composition, as it can affect the mood and difficulty of a piece.-Measuring tempo:...
, meter
Meter (music)
Meter or metre is a term that music has inherited from the rhythmic element of poetry where it means the number of lines in a verse, the number of syllables in each line and the arrangement of those syllables as long or short, accented or unaccented...
, and articulation
Articulation (music)
In music, articulation refers to the musical direction performance technique which affects the transition or continuity on a single note or between multiple notes or sounds.- Types of articulations :...
), dynamics
Dynamics (music)
In music, dynamics normally refers to the volume of a sound or note, but can also refer to every aspect of the execution of a given piece, either stylistic or functional . The term is also applied to the written or printed musical notation used to indicate dynamics...
, and the sonic qualities of timbre
Timbre
In music, timbre is the quality of a musical note or sound or tone that distinguishes different types of sound production, such as voices and musical instruments, such as string instruments, wind instruments, and percussion instruments. The physical characteristics of sound that determine the...
and texture
Texture (music)
In music, texture is the way the melodic, rhythmic, and harmonic materials are combined in a composition , thus determining the overall quality of sound of a piece...
. The word derives from Greek
Greek language
Greek is an independent branch of the Indo-European family of languages. Native to the southern Balkans, it has the longest documented history of any Indo-European language, spanning 34 centuries of written records. Its writing system has been the Greek alphabet for the majority of its history;...
μουσική (mousike; "art of the Muses").

The creation, performance
Performance
A performance, in performing arts, generally comprises an event in which a performer or group of performers behave in a particular way for another group of people, the audience. Choral music and ballet are examples. Usually the performers participate in rehearsals beforehand. Afterwards audience...
, significance, and even the definition of music
Definition of music
How to define music has long been the subject of debate; philosophers, musicians, and, more recently, various social and natural scientists have argued about what constitutes music. The definition has varied through history, in different regions, and within societies. Definitions vary as music,...
vary according to culture and social context. Music ranges from strictly organized compositions (and their recreation in performance), through improvisational music to aleatoric
Aleatory
Aleatoricism is the incorporation of chance into the process of creation, especially the creation of art or media. The word derives from the Latin word alea, the rolling of dice...
forms. Music can be divided into genre
Genre
Genre , Greek: genos, γένος) is the term for any category of literature or other forms of art or culture, e.g. music, and in general, any type of discourse, whether written or spoken, audial or visual, based on some set of stylistic criteria. Genres are formed by conventions that change over time...
s and subgenres, although the dividing lines and relationships between music genres are often subtle, sometimes open to individual interpretation, and occasionally controversial.

This question is about vinyl record albums. I have an album of Peter Gabriel called "So". The record label on the middle of the album has Gabriel"s...

Are Basset horns difficult to play in tune ?

HERBERT and ETHEL WATTERWORTH I am looking for information on music hall artists Herbert and Ethel (nee Whiffen) Watterworth who performed in England...
More

Commodities and Cost of Living At An All Time High Due to Inflation, One Music Marketing Company Freezes Prices

Cooler Music Out Now From Joe Fox and the Frantics Single Dancin’ Shoes, on Spotify and Youtube

The emphasis of study upon a particular aspect of music is in itself ideological because it contains implications about the music's value.

If we compel the composer to write in terms of what the listener is able to hear, we flirt with the danger of freezing the evolution of musical language, whose progressive development comes about through transgressions of a given era's perceptual habits."

In order for music to free itself, it will have to pass over to the other side -— there where territories tremble, where the structures collapse, where the ethoses get mixed up, where a powerful song of the earth is unleashed, the great ritornelles that transmutes all the airs it carries away and makes return.

Gilles Deleuze, from his Essays Critical and Clinical, p. 104.

Most people have music in the center of their lives. I believe my work sheds light on how music affects us and why it is so influential.

Music has no subject beyond the combinations of notes we hear, for music speaks not only by means of sounds, it speaks nothing but sound.