My daughter is smart,she's an england,and she's studying in British school in vietnam.but the way that the teachers teach her seem not suitable for he...
More 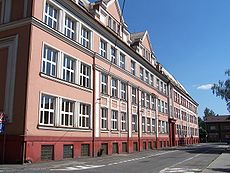 In Australia, Primary School is generally for children aged 5–12. In South Australia, Western Australia and Queensland grade 7 is part of primary school; in other states it forms part of secondary education. In certain year groups, students in all schools take part in the National Assessment Programme (NAP). The year levels:

After primary school, students move on to high school.

In Canada, primary school (also known as elementary school) usually begins at the ages of four through six, starting with either Kindergarten or Grade 1 and lasts until age 13 or 14. Many places in Canada split primary school into two divisions, with primary (or elementary) lasting from Kindergarten to grades five or six (ages 10-11) , and junior secondary or middle school lasting from grades six or seven to grades eight or nine (ages 13-15).

Depending on the federal state
States of Germany
Germany is made up of sixteen which are partly sovereign constituent states of the Federal Republic of Germany. Land literally translates as "country", and constitutionally speaking, they are constituent countries...
, primary schools provide education from Class 1 to Class 4 or from Class 1 to Class 6. After primary school students may attend a Hauptschule
Hauptschule
A Hauptschule is a secondary school in Germany and Austria, starting after 4 years of elementary schooling, which offers Lower Secondary Education according to the International Standard Classification of Education...
, Mittelschule
Mittelschule
Mittelschule is a term in German education that may refer to different schools. In some States of Germany a school similar to a Hauptschule may be called Mittelschule, while in other States of Germany a combination of Hauptschule and Realschule is called Mittelschule...
, Regionale Schule
Regionale Schule
In Germany, a Regionale Schule or Regionalschule ist a secondary school that allows attaining "Berufsreife" or Mittlere Reife. It exists only in some states of germany....
or a Realschule
Realschule
The Realschule is a type of secondary school in Germany, Austria, Switzerland, and Liechtenstein. It has also existed in Croatia , Denmark , Sweden , Hungary and in the Russian Empire .-History:The Realschule was an outgrowth of the rationalism and empiricism of the seventeenth and...
, which are more vocationally orientated, a Gymnasium, which is more academically orienated, or a Gesamtschule, which is comparable to a Comprehensive School
Comprehensive school
A comprehensive school is a state school that does not select its intake on the basis of academic achievement or aptitude. This is in contrast to the selective school system, where admission is restricted on the basis of a selection criteria. The term is commonly used in relation to the United...
.

In Ireland, children aged between 4-6 years begin attending primary school. There are eight different 'grades'. Participation is compulsory. This is the first of 14 prescribed years of formal education
Education
Education in its broadest, general sense is the means through which the aims and habits of a group of people lives on from one generation to the next. Generally, it occurs through any experience that has a formative effect on the way one thinks, feels, or acts...
from a standardised curriculum
Curriculum
See also Syllabus.In formal education, a curriculum is the set of courses, and their content, offered at a school or university. As an idea, curriculum stems from the Latin word for race course, referring to the course of deeds and experiences through which children grow to become mature adults...
set by the Department of Education
Department of Education and Science (Ireland)
The Department of Education and Skills is a department of the Government of Ireland. It is led by the Minister for Education and Skills who is assisted by two Ministers of State.-Departmental team:...
.

In Malaysia, the first six years of education take place in primary schools. A standardized test,known as Primary School Assesment Test (UPSR-Ujian Pencapaian Sekolah Rendah) is given to all national primary school students at their final year (12 years old), before proceeding to five years of secondary education.Based on UPSR results, students apply and are sorted into secondary schools for 5 years course.

The medium of instruction is English. After completing kindergarten, or pre-school years, children will then have to go through 6 years compulsory of primary education, from ages 7 to 12. At the end of primary education, students are required to take a standardised national exam, the Primary School Leaving Examination(also known as PSLE). Based on PSLE results, students apply and are sorted into secondary schools for a 4 or 5 year course.

In Sweden kids go to the primary school (grundskola) through the ages of 7 and 15. After that they can choose to (although it is pretty uncommon not to) study at a gymnasium
Gymnasium (school)
A gymnasium is a type of school providing secondary education in some parts of Europe, comparable to English grammar schools or sixth form colleges and U.S. college preparatory high schools. The word γυμνάσιον was used in Ancient Greece, meaning a locality for both physical and intellectual...
for three years where they pick a program devoted to a particular direction (i.e. Science
Science
Science is a systematic enterprise that builds and organizes knowledge in the form of testable explanations and predictions about the universe...
, Aesthetics
Aesthetics
Aesthetics is a branch of philosophy dealing with the nature of beauty, art, and taste, and with the creation and appreciation of beauty. It is more scientifically defined as the study of sensory or sensori-emotional values, sometimes called judgments of sentiment and taste...
, Civics
Civics
Civics is the study of rights and duties of citizenship. In other words, it is the study of government with attention to the role of citizens ― as opposed to external factors ― in the operation and oversight of government....
). During the gymnasium all students have some subjects they have to study, but not during all three years. Almost all children attend a preparatory year at the age of 6. This initial year is not mandatory.

The children don't start receiving grades until their eighth year. This is, however, about to change according to a new proposal from the Swedish government, where grades will be given from the sixth year.

In the UK schools providing primary education in the state sector are known as primary schools. They generally cater for children aged from four to eleven (Reception
Reception (school)
Reception or Primary 1 or FS2 is the first year of primary school in the United Kingdom and South Australia. It is preceded by nursery and is followed by Year One in England and Wales or Primary 2 in Northern Ireland and Scotland.Pupils in Reception are usually aged between four and five...
to Year Six
Year Six
Year Six is an educational year group in schools in many countries including England, Wales, Australia and New Zealand. It is usually the sixth year of compulsory education and incorporates students aged between ten and twelve.-Australia:...
; in Scotland Primary One to Primary Seven).

In areas that adopted a three-tier system, the term primary school is often used as an alternative to First School
First School
First school and lower school are terms used in some areas of the United Kingdom to describe the first stage of primary education. Some English Local Education Authorities have introduced First Schools since the 1960s...
, taking in ages up to 9 or 10 years old, although for education planning purposes, the term "primary education" in these areas will still cover the age groups as in a two-tier system.

Primary school students in England sit standardised tests 'SATs' in Year 6 and in Year 2. These tests are used to provide individual student results and to rank schools according to their performance. Tests include Numeracy, Mental Maths, Reading Comprehension, Writing and Spelling. A final level is awarded for Maths, English and Science. Wales and Northern Ireland abolished the tests quite some time ago, whilst Scotland never implemented the SATs.