Encyclopedia
Southeast Europe or Southeastern Europe is a relatively recent political designation for the states of the Balkans
Balkans
The Balkans is a geopolitical and cultural region of southeastern Europe...
. Writers such as Maria Todorova
Maria Todorova
Maria N. Todorova is a Bulgarian historian and philosopher who is best known for her application of Edward Said's notion of "Orientalism" to the Balkans. She is the daughter of former Bulgarian President Nikolai Todorov.-Career:...
and Vesna Goldsworthy have suggested the use of the term Southeastern Europe to replace the word Balkans for the region, to minimize potential misunderstandings about the term Balkans having negative connotations. The use of this term is slowly growing; a European Union
European Union
The European Union is an economic and political union of 27 independent member states which are located primarily in Europe. The EU traces its origins from the European Coal and Steel Community and the European Economic Community , formed by six countries in 1958...
initiative of 1999 is called the Stability Pact for South Eastern Europe
Stability Pact for South Eastern Europe
The Stability Pact for South Eastern Europe was an institution aimed at strengthening peace, democracy, human rights and economy in the countries of South Eastern Europe from 1999-2008. It was replaced by the Regional Co-operation Council in February 2008...
.

The first known usage of the term 'Southeast Europe' was by an Austrian researcher, Johann Georg von Hahn
Johann Georg von Hahn
Johann Georg von Hahn was an Austrian diplomat, philologist and specialist in Albanian history, language and culture....
(1811–1869) as broader term than the traditional Balkans. Unlike the United Nations
United Nations
The United Nations is an international organization whose stated aims are facilitating cooperation in international law, international security, economic development, social progress, human rights, and achievement of world peace...
definitions of Eastern Europe
Eastern Europe
Eastern Europe is the eastern part of Europe. The term has widely disparate geopolitical, geographical, cultural and socioeconomic readings, which makes it highly context-dependent and even volatile, and there are "almost as many definitions of Eastern Europe as there are scholars of the region"...
, Western Europe
Western Europe
Western Europe is a loose term for the collection of countries in the western most region of the European continents, though this definition is context-dependent and carries cultural and political connotations. One definition describes Western Europe as a geographic entity—the region lying in the...
, Southern Europe
Southern Europe
The term Southern Europe, at its most general definition, is used to mean "all countries in the south of Europe". However, the concept, at different times, has had different meanings, providing additional political, linguistic and cultural context to the definition in addition to the typical...
and Northern Europe
Northern Europe
Northern Europe is the northern part or region of Europe. Northern Europe typically refers to the seven countries in the northern part of the European subcontinent which includes Denmark, Estonia, Latvia, Lithuania, Norway, Finland and Sweden...
, there are no clear and universally accepted geographical or historical divisions that delineate this region.
However, if United Nations definitions of bordering macroregions are done, the rest can be considered as Central Europe
Central Europe
Central Europe or alternatively Middle Europe is a region of the European continent lying between the variously defined areas of Eastern and Western Europe...
. 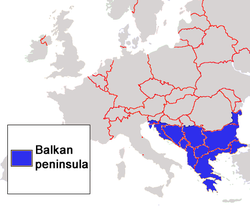 This concept is based on a geographic argument, that is, on the boundaries of the Balkans
Balkans
The Balkans is a geopolitical and cultural region of southeastern Europe...
(which is considered a synonym by the supporters). The countries located fully in the peninsula are the following: Albania
Albania
Albania , officially known as the Republic of Albania , is a country in Southeastern Europe, in the Balkans region. It is bordered by Montenegro to the northwest, Kosovo to the northeast, the Republic of Macedonia to the east and Greece to the south and southeast. It has a coast on the Adriatic Sea...
, Bosnia and Herzegovina
Bosnia and Herzegovina
Bosnia and Herzegovina , sometimes called Bosnia-Herzegovina or simply Bosnia, is a country in Southern Europe, on the Balkan Peninsula. Bordered by Croatia to the north, west and south, Serbia to the east, and Montenegro to the southeast, Bosnia and Herzegovina is almost landlocked, except for the...
, Kosovo
Kosovo
Kosovo is a region in southeastern Europe. Part of the Ottoman Empire for more than five centuries, later the Autonomous Province of Kosovo and Metohija within Serbia...
(Limited recognition), Bulgaria
Bulgaria
Bulgaria , officially the Republic of Bulgaria , is a parliamentary democracy within a unitary constitutional republic in Southeast Europe. The country borders Romania to the north, Serbia and Macedonia to the west, Greece and Turkey to the south, as well as the Black Sea to the east...
, Greece
Greece
Greece , officially the Hellenic Republic , and historically Hellas or the Republic of Greece in English, is a country in southeastern Europe....
, Macedonia
Republic of Macedonia
Macedonia , officially the Republic of Macedonia , is a country located in the central Balkan peninsula in Southeast Europe. It is one of the successor states of the former Yugoslavia, from which it declared independence in 1991...
, and Montenegro
Montenegro
Montenegro Montenegrin: Crna Gora Црна Гора , meaning "Black Mountain") is a country located in Southeastern Europe. It has a coast on the Adriatic Sea to the south-west and is bordered by Croatia to the west, Bosnia and Herzegovina to the northwest, Serbia to the northeast and Albania to the...

The geographic definition may also include countries which are significantly located in the peninsula: Croatia
Croatia
Croatia , officially the Republic of Croatia , is a unitary democratic parliamentary republic in Europe at the crossroads of the Mitteleuropa, the Balkans, and the Mediterranean. Its capital and largest city is Zagreb. The country is divided into 20 counties and the city of Zagreb. Croatia covers ...
(1/2) and Serbia
Serbia
Serbia , officially the Republic of Serbia , is a landlocked country located at the crossroads of Central and Southeast Europe, covering the southern part of the Carpathian basin and the central part of the Balkans...
(up to 2/3) and some countries which are located mostly outside the peninsula as defined by the rivers: Romania
Romania
Romania is a country located at the crossroads of Central and Southeastern Europe, on the Lower Danube, within and outside the Carpathian arch, bordering on the Black Sea...
(6%) and Turkey
Turkey
Turkey , known officially as the Republic of Turkey , is a Eurasian country located in Western Asia and in East Thrace in Southeastern Europe...
(3%).

The Stability Pact for South Eastern Europe was an institution aimed at strengthening peace, democracy
Democracy
Democracy is generally defined as a form of government in which all adult citizens have an equal say in the decisions that affect their lives. Ideally, this includes equal participation in the proposal, development and passage of legislation into law...
, human rights
Human rights
Human rights are "commonly understood as inalienable fundamental rights to which a person is inherently entitled simply because she or he is a human being." Human rights are thus conceived as universal and egalitarian . These rights may exist as natural rights or as legal rights, in both national...
and economy in the countries of South Eastern Europe from 1999–2008. It was replaced by the Regional Co-operation Council
Regional Co-operation Council
The Regional Cooperation Council, or RCC, is a regional cooperative framework for countries in South East Europe, with the stated goal of "promoting mutual cooperation and European and Euro-Atlantic integration of South East Europe in order to inspire development in the region to the benefit of its...
in February 2008. The RCC replaced the Stability Pact because it is more "regionally owned" than the SP, which was driven more by outside partners such as the EU. The countries included were:
Albania, Bosnia and Herzegovina, Bulgaria, Croatia, Macedonia, Moldova, Montenegro, Romania, and Serbia.

The 'Southeast Europe transnational co-operation programme' "aims to develop transnational partnerships on matters of strategic importance, in order to improve the territorial, economic and social integration process and to contribute to cohesion, stability and competitiveness of the region".

The members include: Albania, Austria, Bosnia and Herzegovina, Bulgaria, Croatia, Republic of Macedonia, Greece, Hungary, Republic of Moldova, Montenegro, Romania, Serbia , Slovakia, Slovenia, and some regions of Italy and Ukraine