Panepistimiou Street (named after the University of Athens the central building of which is on the upper corner) is a major street in Athens
Athens
Athens , is the capital and largest city of Greece. Athens dominates the Attica region and is one of the world's oldest cities, as its recorded history spans around 3,400 years. Classical Athens was a powerful city-state...
that runs one way for non-transit vehicles since 2002 from Amalias Avenue
Amalias Avenue
Vasilissis Amalias Avenue is a major avenue linking Andrea Syngrou Avenue along with Athanasiou Diakou Street, a small artery to Vouliagmenis Avenue and Panepistimiou Street along with Vassilissis Sofias Avenue...
, Syntagma Square
Syntagma Square
Syntagma Square , is located in central Athens, Greece. The Square is named after the Constitution that King Otto was forced to grant the people after a popular and military uprising, on September 3, 1843....
and Vassilissis Sofias Avenue
Vassilissis Sofias Avenue
Vasilissis Sofias Avenue is a major avenue in the east side of Athens, the Greek capital. The avenue was originally part of the Kifisias Avenue. The part from Syntagma Square to the intersection with Alexandras Avenue was renamed after Queen Sophia the consort of King Constantine I...
to Omonoia Square
Omonoia Square
Omonoia Square is a central square in Athens. It marks the northern corner of the downtown area defined by the city plans of the 19th century, and is one of the city's principal traffic hubs...
in which is now a pedestrian crossing and before an intersection. Its total length is about 1.2 km. The street was formally renamed as Eleftherios Venizelos
Eleftherios Venizelos
Eleftherios Venizelos was an eminent Greek revolutionary, a prominent and illustrious statesman as well as a charismatic leader in the early 20th century. Elected several times as Prime Minister of Greece and served from 1910 to 1920 and from 1928 to 1932...
Avenue in the 1980s (after the famous Prime Minister), but is still known by its historical name. It has six lanes, of which five are for traffic and one eastbound lane for transit buses only. Most of the street runs almost diagonally from southeast to northwest.

Buildings along the street include the Bank of Greece
Bank of Greece
The Bank of Greece is the nationalcentral bank of Greece, located in Athens on Panepistimiou Street, with several branches across the country. Founded in 1927...
, Athens Eye Clinic, the University of Athens, the Academy of Athens
Academy of Athens (modern)
The Academy of Athens is Greece's national academy, and the highest research establishment in the country. It was established in 1926, and operates under the supervision of the Ministry of Education...
, the National Library
National Library of Greece
The National Library of Greece is situated near the center of city of Athens. It was designed by the Danish architect Theophil Freiherr von Hansen, as part of his famous Trilogy of neo-classical buildings including the Academy of Athens and the original building of the Athens...
, the Numismatic Museum
Numismatic Museum of Athens
The Numismatic Museum in Athens is one of the most important museums of Greece and houses one of the greatest collections of coins, ancient and modern, in the world...
, Titania Hotel
Titania (Hotel)
Titania Hotel is a historic hotel in the center of Athens, Greece. It is located on Panepistimiou Street, in the heart of the historical and commercial centre of the Greek capital, between the two major squares, Syntagma & Omonoia. Titania has been renovated in 2004 and 2007, is decorated with the...
, Attica Department Store,as well as a part of the Grande Bretagne Hotel and the Catholic Cathedral of Athens. Many buildings as high as ten to fifteen stories line this street. Old neoclassical buildings of no higher than two to three stories used to exist until the 1950s, when a construction spree, which lasted several decades, demolished all but a few of them.

Originally a two-way street until after the Greek Civil War
Greek Civil War
The Greek Civil War was fought from 1946 to 1949 between the Greek governmental army, backed by the United Kingdom and United States, and the Democratic Army of Greece , the military branch of the Greek Communist Party , backed by Bulgaria, Yugoslavia and Albania...
with bus lanes, traffic lights on major intersections as well as street lights were installed in the 1950s. Several classic films were shot in this street. The Athens Metro Red Line runs underneath with stations linking with this street including the Panepistimiou station. During construction which lasted from 1997 to 2001, part of the underground soil was removed to make the underground subway system, causing a hole of 22 m below and a sinking of the street of about 4 m. Workers filled the hole with concrete so that traffic can resume. In the 2000s, the transit buses which can run eastbound can now run two way and is at the lower end of the street. 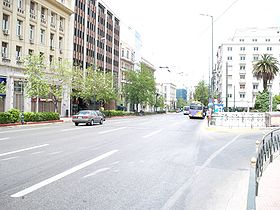