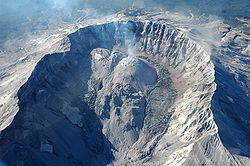 Lava domes are dynamic structures that evolve over time undergoing various processes such as growth, collapse, solidification and erosion
Erosion
Erosion is when materials are removed from the surface and changed into something else. It only works by hydraulic actions and transport of solids in the natural environment, and leads to the deposition of these materials elsewhere...
.

Lava domes grow by endogenic
Endogenic and exogenic
Endogenic and exogenic may refer to:* Endogeny, an action or object coming from within a system* Exogeny, an action or object coming from outside a system...
dome growth or exogenic
Endogenic and exogenic
Endogenic and exogenic may refer to:* Endogeny, an action or object coming from within a system* Exogeny, an action or object coming from outside a system...
dome growth. The first one implies dome interior expansion to accommodate new lava and the second one refers to superficial piling up of lava. It is the high viscosity of the lava that prevents it from flowing far from the vent from which it extrudes, creating a dome-like shape of sticky lava that then cools slowly in situ. Domes may reach heights of several hundred meters, and can grow slowly and steadily for months (e.g. Unzen volcano), years (e.g. Soufrière Hills
Soufrière Hills
The Soufrière Hills volcano is an active complex stratovolcano with many lava domes forming its summit on the Caribbean island of Montserrat. After a long period of dormancy, it became active in 1995, and has continued to erupt ever since...
volcano), or even centuries (e.g. Mount Merapi
Mount Merapi
Mount Merapi, Gunung Merapi , is an active stratovolcano located on the border between Central Java and Yogyakarta, Indonesia. It is the most active volcano in Indonesia and has erupted regularly since 1548...
volcano). The sides of these structures are composed of unstable rock debris
Debris
Debris is rubble, wreckage, ruins, litter and discarded garbage/refuse/trash, scattered remains of something destroyed, or, in geology, large rock fragments left by a melting glacier etc. The singular form of debris is debris...
. Due to the intermittent build up of gas pressure
Pressure
Pressure is the force per unit area applied in a direction perpendicular to the surface of an object. Gauge pressure is the pressure relative to the local atmospheric or ambient pressure.- Definition :...
, erupting domes can often experience episodes of explosive eruption
Explosive eruption
An explosive eruption is a volcanic term to describe a violent, explosive type of eruption. Mount St. Helens in 1980 was an example. Such an eruption is driven by gas accumulating under great pressure. Driven by hot rising magma, it interacts with ground water until the pressure increases to the...
over time. If part of a lava dome collapses while it is still molten, it can produce pyroclastic flow
Pyroclastic flow
A pyroclastic flow is a fast-moving current of superheated gas and rock , which reaches speeds moving away from a volcano of up to 700 km/h . The flows normally hug the ground and travel downhill, or spread laterally under gravity...
s, one of the most lethal forms of volcanic event. Other hazards associated with lava domes are the destruction of property, forest fires, and lahars triggered by pyroclastic flows near mud
Mud
Mud is a mixture of water and some combination of soil, silt, and clay. Ancient mud deposits harden over geological time to form sedimentary rock such as shale or mudstone . When geological deposits of mud are formed in estuaries the resultant layers are termed bay muds...
, snow
Snow
Snow is a form of precipitation within the Earth's atmosphere in the form of crystalline water ice, consisting of a multitude of snowflakes that fall from clouds. Since snow is composed of small ice particles, it is a granular material. It has an open and therefore soft structure, unless packed by...
and ice
Ice
Ice is water frozen into the solid state. Usually ice is the phase known as ice Ih, which is the most abundant of the varying solid phases on the Earth's surface. It can appear transparent or opaque bluish-white color, depending on the presence of impurities or air inclusions...
. Lava domes are one of the principal structural features of many stratovolcano
Stratovolcano
A stratovolcano, also known as a composite volcano, is a tall, conical volcano built up by many layers of hardened lava, tephra, pumice, and volcanic ash. Unlike shield volcanoes, stratovolcanoes are characterized by a steep profile and periodic, explosive eruptions...
es worldwide. Lava domes cause explosions to become more dangerous since they contain rhyolitic silica rich lava. 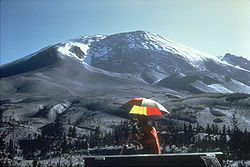 A cryptodome (from Greek
Ancient Greek
Ancient Greek is the stage of the Greek language in the periods spanning the times c. 9th–6th centuries BC, , c. 5th–4th centuries BC , and the c. 3rd century BC – 6th century AD of ancient Greece and the ancient world; being predated in the 2nd millennium BC by Mycenaean Greek...
κρυπτός, kryptos, "hidden, secret") is a dome-shaped structure created by accumulation of viscous magma
Magma
Magma is a mixture of molten rock, volatiles and solids that is found beneath the surface of the Earth, and is expected to exist on other terrestrial planets. Besides molten rock, magma may also contain suspended crystals and dissolved gas and sometimes also gas bubbles. Magma often collects in...
at a shallow depth. One example of a cryptodome was in the May 1980 eruption of Mount St. Helens
1980 eruption of Mount St. Helens
The 1980 eruption of Mount St. Helens, a stratovolcano located in Washington state, in the United States, was a major volcanic eruption. The eruption was the only significant one to occur in the contiguous 48 U.S. states since the 1915 eruption of Lassen Peak in California...
, where the explosive eruption began after a landslide caused the side of the volcano to fall, leading to explosive decompression of the subterranean cryptodome.

Coulees are lava domes that have experienced some flow away from their original position, thus resembling both lava domes and lava flows.