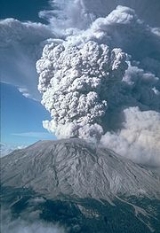 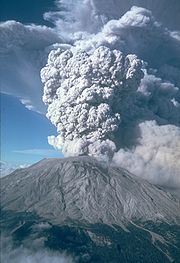 An explosive eruption is a volcanic term to describe a violent, explosive type of eruption. Mount St. Helens
Mount St. Helens
Mount St. Helens is an active stratovolcano located in Skamania County, Washington, in the Pacific Northwest region of the United States. It is south of Seattle, Washington and northeast of Portland, Oregon. Mount St. Helens takes its English name from the British diplomat Lord St Helens, a...
in 1980 was an example. Such an eruption is driven by gas accumulating under great pressure. Driven by hot rising magma
Magma
Magma is a mixture of molten rock, volatiles and solids that is found beneath the surface of the Earth, and is expected to exist on other terrestrial planets. Besides molten rock, magma may also contain suspended crystals and dissolved gas and sometimes also gas bubbles. Magma often collects in...
, it interacts with ground water until the pressure increases to the point at which it bursts violently through the overmantle of rock. In many cases, the rising magma will contain large quantities of partially dissolved gas. Sometimes a lava plug will block the conduit to the summit, and when this occurs, eruptions are more violent. With the sudden release of pressure following the initial explosion, the gas comes out of solution violently and explosively. This secondary explosion is often far more violent than the first one; the rocks, dust, gas and pyroclastic material may be blown 20 km into the atmosphere at rate of up to 100,000 tonnes per second, traveling at several hundred metres per second. This cloud will then collapse, creating a pyroclastic flow
Pyroclastic flow
A pyroclastic flow is a fast-moving current of superheated gas and rock , which reaches speeds moving away from a volcano of up to 700 km/h . The flows normally hug the ground and travel downhill, or spread laterally under gravity...
of hot volcanic matter.


Stages of an explosive eruption

An explosive eruption always begins with some form of blockage in the crater of a volcano that prevents the release of gases trapped in highly viscous andesitic or rhyolitic magma. The high viscosity of these forms of magma prevents the release of trapped gases. When this type of magma flows towards the surface pressure builds, eventually causing the blockage to be blasted out in an explosive eruption. The pressure from the magma and gases are released through the weakest point in the cone, usually the crater. However, in the case of the eruption of Mount St. Helens
Mount St. Helens
Mount St. Helens is an active stratovolcano located in Skamania County, Washington, in the Pacific Northwest region of the United States. It is south of Seattle, Washington and northeast of Portland, Oregon. Mount St. Helens takes its English name from the British diplomat Lord St Helens, a...
, pressure was released through the side of the volcano, rather than the crater.

The sudden release of pressure causes the gases in the magma to suddenly froth and create volcanic ash
Volcanic ash
Volcanic ash consists of small tephra, which are bits of pulverized rock and glass created by volcanic eruptions, less than in diameter. There are three mechanisms of volcanic ash formation: gas release under decompression causing magmatic eruptions; thermal contraction from chilling on contact...
and pumice
Pumice
Pumice is a textural term for a volcanic rock that is a solidified frothy lava typically created when super-heated, highly pressurized rock is violently ejected from a volcano. It can be formed when lava and water are mixed. This unusual formation is due to the simultaneous actions of rapid...
, which is then ejected through the volcanic vent to create the signature eruption column
Eruption column
An eruption column consists of hot volcanic ash emitted during an explosive volcanic eruption. The ash forms a column rising many kilometres into the air above the peak of the volcano. In the most explosive eruptions, the eruption column may rise over 40 km, penetrating the stratosphere...
commonly associated with explosive eruptions. The size and duration of the column depends on the volume of magma being released and how much pressure the magma was under.

Pyroclastic flows occur towards the end of an explosive eruption, as pressure begins to decline. The eruption column of ash is supported by pressure from the gases being released, and as the gases are depleted, pressure falls and the eruption column begins to collapse. When the column collapses in on itself, ash and rock fall back down to the ground and begin to flow down the slopes of the volcano. These flows can travel at up to 80 km per hour, and reach temperatures of 200° to 700° celsius. The high temperatures can cause combustion of any flammable materials in its path, including wood, vegetation, and buildings. When snow and ice melt as a part of an eruption, large amounts of water mixed in with the flow can create lahars. The risk of lahars is particularly high on volcanoes such as Mount Rainier
Mount Rainier
Mount Rainier is a massive stratovolcano located southeast of Seattle in the state of Washington, United States. It is the most topographically prominent mountain in the contiguous United States and the Cascade Volcanic Arc, with a summit elevation of . Mt. Rainier is considered one of the most...
near Vancouver, Washington
Vancouver, Washington
Vancouver is a city on the north bank of the Columbia River in the U.S. state of Washington. Incorporated in 1857, it is the fourth largest city in the state with a 2010 census population of 161,791 as of April 1, 2010...
.

The eruption of supervolcano
Supervolcano
A supervolcano is a volcano capable of producing a volcanic eruption with an ejecta volume greater than 1,000 cubic kilometers . This is thousands of times larger than most historic volcanic eruptions. Supervolcanoes can occur when magma in the Earth rises into the crust from a hotspot but is...
es is the rarest of volcanic eruptions but also the most destructive. The timescale between these eruptions is generally marked by hundreds or thousands of years. This type of eruption generally causes destruction on a continental scale, and can also result in the lowering of temperatures world wide.
The source of this article is wikipedia, the free encyclopedia.  The text of this article is licensed under the GFDL.