Harrison was born in New York City
New York City
New York is the most populous city in the United States and the center of the New York Metropolitan Area, one of the most populous metropolitan areas in the world. New York exerts a significant impact upon global commerce, finance, media, art, fashion, research, technology, education, and...
to Burton Harrison
Burton Harrison
Burton Norvell Harrison , was a lawyer, American Democratic politician, and private secretary to Confederate States of America president Jefferson Davis.-Early life:...
, a lawyer and private secretary to Confederate President
Confederate States of America
The Confederate States of America was a government set up from 1861 to 1865 by 11 Southern slave states of the United States of America that had declared their secession from the U.S...
Jefferson Davis
Jefferson Davis
Jefferson Finis Davis , also known as Jeff Davis, was an American statesman and leader of the Confederacy during the American Civil War, serving as President for its entire history. He was born in Kentucky to Samuel and Jane Davis...
, and Constance Cary Harrison
Constance Cary Harrison
Constance Cary Harrison , was a prolific American writer. She was also known as Constance Cary, Constance C. Harrison, and Mrs. Burton Harrison, as well as her nom de plume, "Refugitta." She was married to Burton Harrison, a lawyer and American democratic politician...
, novelist and social arbiter. Through his mother, Harrison was great-grandson of Virginia
Virginia
The Commonwealth of Virginia , is a U.S. state on the Atlantic Coast of the Southern United States. Virginia is nicknamed the "Old Dominion" and sometimes the "Mother of Presidents" after the eight U.S. presidents born there...
-planter, Thomas Fairfax, 9th Lord Fairfax of Cameron
Thomas Fairfax, 9th Lord Fairfax of Cameron
Thomas Fairfax, 9th Lord Fairfax of Cameron , son of Bryan Fairfax. Thomas Fairfax, with his father, on December 11, 1799, was among the last guests at Mount Vernon, before Washington died....
. Through Fairfax in birth and marriage, Harrison was also relative to United States founding fathers: Gouverneur Morris
Gouverneur Morris
Gouverneur Morris , was an American statesman, a Founding Father of the United States, and a native of New York City who represented Pennsylvania in the Constitutional Convention of 1787. He was a signatory to the Articles of Confederation. Morris was also an author of large sections of the...
(his great-great-uncle), Thomas Jefferson
Thomas Jefferson
Thomas Jefferson was the principal author of the United States Declaration of Independence and the Statute of Virginia for Religious Freedom , the third President of the United States and founder of the University of Virginia...
, Robert E. Lee
Robert E. Lee
Robert Edward Lee was a career military officer who is best known for having commanded the Confederate Army of Northern Virginia in the American Civil War....
, the Randolphs, the Ishams, and the Carters.

Harrison graduated from Yale University
Yale University
Yale University is a private, Ivy League university located in New Haven, Connecticut, United States. Founded in 1701 in the Colony of Connecticut, the university is the third-oldest institution of higher education in the United States...
in 1895, where he was a member of the secret society Skull and Bones
Skull and Bones
Skull and Bones is an undergraduate senior or secret society at Yale University, New Haven, Connecticut. It is a traditional peer society to Scroll and Key and Wolf's Head, as the three senior class 'landed societies' at Yale....
, and from the New York Law School
New York Law School
New York Law School is a private law school in the TriBeCa neighborhood of Lower Manhattan in New York City. New York Law School is one of the oldest independent law schools in the United States. The school is located within four blocks of all major courts in Manhattan. In 2011, New York Law School...
in 1897. From 1897 to 1899, Harrison was an instructor in the Evening Division at New York Law School. He later left to serve in United States Army
United States Army
The United States Army is the main branch of the United States Armed Forces responsible for land-based military operations. It is the largest and oldest established branch of the U.S. military, and is one of seven U.S. uniformed services...
during the Spanish-American War
Spanish-American War
The Spanish–American War was a conflict in 1898 between Spain and the United States, effectively the result of American intervention in the ongoing Cuban War of Independence...
, first as captain and later as assistant adjutant general
Adjutant general
An Adjutant General is a military chief administrative officer.-Imperial Russia:In Imperial Russia, the General-Adjutant was a Court officer, who was usually an army general. He served as a personal aide to the Tsar and hence was a member of the H. I. M. Retinue...
.

Harrison's first wife was Mary Crocker, daughter of California
California
California is a state located on the West Coast of the United States. It is by far the most populous U.S. state, and the third-largest by land area...
railroad and mining
Mining
Mining is the extraction of valuable minerals or other geological materials from the earth, from an ore body, vein or seam. The term also includes the removal of soil. Materials recovered by mining include base metals, precious metals, iron, uranium, coal, diamonds, limestone, oil shale, rock...
magnate Charles Frederick Crocker
Charles Frederick Crocker
Charles Frederick Crocker , was vice president of the Southern Pacific Transportation Company.-Biography:He was born in Sacramento on December 26, 1854 to Charles Crocker.-References:...
. They had married on June 7, 1900. She died in 1905 in an automoblie accident leaving Harrison to raise two small daughters, one of which was Barbara Harrison Wescott
Barbara Harrison Wescott
-Biography:She was born on October 27, 1904 to Francis Burton Harrison.While living in France, she worked closely with other American expatriates in the literary world. She and Monroe Wheeler established Harrison of Paris, a press publishing limited-edition literary paperbacks...
. Harrison would marry and divorce five more times to: Mabel Judson Cox, Elizabeth Wrentmore, Margaret Wrentmore and Doria Lee. His last wife, Maria Teresa, a young Filipino woman
Filipino people
The Filipino people or Filipinos are an Austronesian ethnic group native to the islands of the Philippines. There are about 92 million Filipinos in the Philippines, and about 11 million living outside the Philippines ....
, outlived Harrison.

During his service in the Far East
Asia
Asia is the world's largest and most populous continent, located primarily in the eastern and northern hemispheres. It covers 8.7% of the Earth's total surface area and with approximately 3.879 billion people, it hosts 60% of the world's current human population...
, Harrison was a candidate for the Democratic nomination in the 1920 presidential election. He lost the nomination to Governor of Ohio
Ohio
Ohio is a Midwestern state in the United States. The 34th largest state by area in the U.S.,it is the 7th‑most populous with over 11.5 million residents, containing several major American cities and seven metropolitan areas with populations of 500,000 or more.The state's capital is Columbus...
James M. Cox
James M. Cox
James Middleton Cox was the 46th and 48th Governor of Ohio, U.S. Representative from Ohio and Democratic candidate for President of the United States in the election of 1920....
at the Democratic National Convention
1920 Democratic National Convention
- External links :*...
in San Francisco.

A member of the Woodrow Wilson Administration, Harrison became Governor-General of the Philippines from 1913 to 1921. He was known for advancing the process of Filipinization, the increased transfer of authority to Filipinos in the colonial government so as to better prepare the country for independence by providing its people more experience through actual governing. Despite the length of his tenure as governor-general he vetoed only five bills, the least number by any American governor-general in the Philippines. His pro-Filipino stance made him a popular figure in the Philippines but also the object of criticism of conservative Americans who viewed his liberal governance as not supportive enough of U.S. interests.

Under his administration, the Governor-General's mansion called Malacañang Palace
Malacañang Palace
The Malacañan Palace, commonly known simply as Malacañang, is the official residence and principal workplace of the President of the Philippines. Located at 1000 J. P. Laurel Street, San Miguel, Manila, the house was built in 1750 in Spanish Colonial style. It has been the residence of every...
was expanded with the construction of an executive building. Departing from the position, Harrison lived in Scotland
Scotland
Scotland is a country that is part of the United Kingdom. Occupying the northern third of the island of Great Britain, it shares a border with England to the south and is bounded by the North Sea to the east, the Atlantic Ocean to the north and west, and the North Channel and Irish Sea to the...
until being recalled to the Philippines in 1934. The Philippines would be transitioned from United States territory
United States territory
United States territory is any extent of region under the jurisdiction of the federal government of the United States, including all waters including all U.S. Naval carriers. The United States has traditionally proclaimed the sovereign rights for exploring, exploiting, conserving, and managing its...
to commonwealth
Commonwealth
Commonwealth is a traditional English term for a political community founded for the common good. Historically, it has sometimes been synonymous with "republic."More recently it has been used for fraternal associations of some sovereign nations...
with an elected Filipino government. 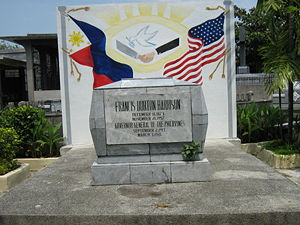 From November 1946 to February 1947, Harrison served as Commissioner of Claims in the civil service of the United States Army
United States Army
The United States Army is the main branch of the United States Armed Forces responsible for land-based military operations. It is the largest and oldest established branch of the U.S. military, and is one of seven U.S. uniformed services...
in Manila
Manila
Manila is the capital of the Philippines. It is one of the sixteen cities forming Metro Manila.Manila is located on the eastern shores of Manila Bay and is bordered by Navotas and Caloocan to the north, Quezon City to the northeast, San Juan and Mandaluyong to the east, Makati on the southeast,...
. He later served as an advisor to the first four presidents of the newly proclaimed Philippine Republic after their independence was granted in 1946.

After his service to the Philippines at Malacañang Palace, Harrison retired to Spain
Spain
Spain , officially the Kingdom of Spain languages]] under the European Charter for Regional or Minority Languages. In each of these, Spain's official name is as follows:;;;;;;), is a country and member state of the European Union located in southwestern Europe on the Iberian Peninsula...
for six years, then chose to move to Califon
Califon, New Jersey
Califon is a borough in Hunterdon County, New Jersey, United States. As of the 2010 United States Census, the borough population was 1,076.The town was to originally be called California, but was shortened to Califon in order to fit on the welcome sign...
, New Jersey
New Jersey
New Jersey is a state in the Northeastern and Middle Atlantic regions of the United States. , its population was 8,791,894. It is bordered on the north and east by the state of New York, on the southeast and south by the Atlantic Ocean, on the west by Pennsylvania and on the southwest by Delaware...
in August 1957.