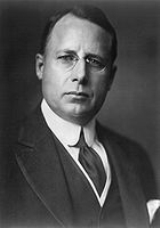 Cox was born in the tiny Butler County, Ohio
Butler County, Ohio
Butler County is a county located in the state of Ohio, United States. As of 2010, the population was 368,130. Its county seat is Hamilton. It is named for General Richard Butler, who died in 1791 fighting Indians in northern Ohio. Butler's army marched out of Fort Hamilton, where the city of...
, village of Jacksonburg
Jacksonburg, Ohio
Jacksonburg is a village in Butler County, Ohio, United States. The population was 67 at the 2000 census.-Geography:Jacksonburg is located at ....
. Cox practiced a variety of trades throughout his life: high school teacher, reporter, owner and editor of several newspapers, and secretary to Congressman Paul J. Sorg
Paul J. Sorg
Paul John Sorg was a businessman and member of the United States House of Representatives from Ohio.-Biography:...
.

While a reporter, Cox once went to a town where a massive railroad accident had occurred. Other reporters went directly to the scene of the accident, but Cox instead went to the town's only telegraph office, where he hired the telegraph operator to begin transmitting the Bible
Bible
The Bible refers to any one of the collections of the primary religious texts of Judaism and Christianity. There is no common version of the Bible, as the individual books , their contents and their order vary among denominations...
to his newspaper, telling the operator he would be back. (Under the law of the day, once a message was begun, it could not be interrupted by others.) Cox then went to the accident site, gathered all the information he needed, and wrote his article. He then returned to the telegraph office, which he found full of frustrated reporters waiting to make use of the telegraph. Cox handed his article to the telegraph operator and thus scooped all of the other reporters.

Cox represented Ohio
Ohio
Ohio is a Midwestern state in the United States. The 34th largest state by area in the U.S.,it is the 7th‑most populous with over 11.5 million residents, containing several major American cities and seven metropolitan areas with populations of 500,000 or more.The state's capital is Columbus...
in the United States House of Representatives
United States House of Representatives
The United States House of Representatives is one of the two Houses of the United States Congress, the bicameral legislature which also includes the Senate.The composition and powers of the House are established in Article One of the Constitution...
(1909–1913), resigning after winning election as Governor of Ohio (1913–1915, and 1917–1921). A capable and well-liked reformer, he was nominated a candidate for the presidency by the Democratic party while serving as Governor. Cox supported the internationalist policies of Woodrow Wilson
Woodrow Wilson
Thomas Woodrow Wilson was the 28th President of the United States, from 1913 to 1921. A leader of the Progressive Movement, he served as President of Princeton University from 1902 to 1910, and then as the Governor of New Jersey from 1911 to 1913...
and favored U.S. entry into the League of Nations
League of Nations
The League of Nations was an intergovernmental organization founded as a result of the Paris Peace Conference that ended the First World War. It was the first permanent international organization whose principal mission was to maintain world peace...
. However, Cox was defeated in the 1920 Presidential Election by a fellow Ohioan and newspaper man, U.S. Senator
United States Senate
The United States Senate is the upper house of the bicameral legislature of the United States, and together with the United States House of Representatives comprises the United States Congress. The composition and powers of the Senate are established in Article One of the U.S. Constitution. Each...
Warren G. Harding
Warren G. Harding
Warren Gamaliel Harding was the 29th President of the United States . A Republican from Ohio, Harding was an influential self-made newspaper publisher. He served in the Ohio Senate , as the 28th Lieutenant Governor of Ohio and as a U.S. Senator...
of Marion
Marion, Ohio
Marion is a city in the U.S. state of Ohio and the county seat of Marion County. The municipality is located in north-central Ohio, approximately north of Columbus....
. The public had grown weary of the turmoil of the Wilson years, and eagerly accepted Harding's call for a "return to normalcy." Cox's running mate was future president, then-Assistant Secretary of the Navy
Assistant Secretary of the Navy
Assistant Secretary of the Navy is the title given to certain civilian senior officials in the United States Department of the Navy....
Franklin D. Roosevelt. One of the better known analyses of the 1920 election is in author Irving Stone's
Irving Stone
Irving Stone was an American writer known for his biographical novels of famous historical personalities, including Lust for Life, a biographical novel about the life of Vincent van Gogh, and The Agony and the Ecstasy, a biographical novel about Michelangelo.-Biography:In...
book about defeated Presidential candidates, They Also Ran
They Also Ran
They Also Ran is the title of a 1943 book by Irving Stone. Stone, a historian, evaluates several unsuccessful candidates for President of the United States in light of their places in history , and attempts to assess whether or not the American people made the "right" choice in rejecting them for...
. Stone rated Cox as superior in every way over Warren Harding, claiming the former would have made a much better President. Stone argued there was never a stronger case in the history of American presidential elections for the proposition that the better man lost.

Cox recorded for The Nation's Forum several times. The campaign speech featured here http://memory.loc.gov/cgi-bin/query/r?ammem/nfor:@field(DOCID+@range(90000031+90000032)) accuses the Republicans of failing to acknowledge that President Wilson's successful prosecution of the war had, according to Cox, "saved civilization."

He built a large newspaper enterprise, Cox Enterprises
Cox Enterprises
Cox Enterprises is the successor to the publishing company founded in Dayton, Ohio, United States, by James Middleton Cox, who began with the Dayton Daily News. He was the Democratic candidate for the President of the United States in the election of 1920...
, including the December 1939 purchase of the Atlanta Georgian
Atlanta Georgian
The Atlanta Georgian was a daily afternoon newspaper in Atlanta, Georgia. Founded by New Jersey native, Fred Loring Seely, the first issue was April 25, 1906, with editor John Temple Graves. They mainly criticized saloons and the convict lease system. In February 1907, Seely expanded the paper by...
and Journal just a week before that city hosted the premiere of Gone with the Wind
Gone with the Wind (film)
Gone with the Wind is a 1939 American historical epic film adapted from Margaret Mitchell's Pulitzer-winning 1936 novel of the same name. It was produced by David O. Selznick and directed by Victor Fleming from a screenplay by Sidney Howard...
. This deal included radio station WSB
WSB (AM)
WSB — branded AM 750 and 95.5 FM News/Talk WSB — is a commercial radio station licensed to Atlanta, Georgia broadcasting a news/talk format. The station transmits with 50,000 watts of nondirectional power day and night, enjoying clear-channel status on its broadcast frequency according to the U.S...
, which joined his previous holdings, WHIO
WHIO (AM)
WHIO is a radio station broadcasting a News Talk Information format. Licensed to Dayton, Ohio, USA, the station serves the Cincinnati and Dayton area...
in Dayton and WIOD
WIOD
WIOD is a news/talk formatted radio station in Miami, Florida. For over 80 years, it has been a major information station in South Florida...
in Miami, to give him "'air' from the Great Lakes
Great Lakes
The Great Lakes are a collection of freshwater lakes located in northeastern North America, on the Canada – United States border. Consisting of Lakes Superior, Michigan, Huron, Erie, and Ontario, they form the largest group of freshwater lakes on Earth by total surface, coming in second by volume...
on the north to Latin America
Latin America
Latin America is a region of the Americas where Romance languages  – particularly Spanish and Portuguese, and variably French – are primarily spoken. Latin America has an area of approximately 21,069,500 km² , almost 3.9% of the Earth's surface or 14.1% of its land surface area...
on the south."

Cox was married twice. He married Mayme Simpson Harding in 1898. They divorced in 1911. He married Margaretta Parler Blair in 1917 and she survived him. Cox had four children, two sons by Mayme Harding and two daughters by Margaretta Blair. One of his daughters, Anne Cox Chambers
Anne Cox Chambers
Anne Beau Cox Chambers is a media proprietor, who is primary owner of Cox Enterprises, a privately held media empire that includes newspapers, television, radio, cable television, and other businesses....
, is still a major shareholder in the company; she owned 98% of the company with her sister Barbara Cox Anthony
Barbara Cox Anthony
Barbara Blair Cox Anthony was the youngest daughter of James M. Cox, a Democratic governor of Ohio, newspaper publisher and broadcaster. With her sister Anne Cox Chambers and brother James M. Cox, Jr., she inherited, via a trust, ownership and control of her father’s company, now called Cox...
until the latter's death in 2007. The company's headquarters is in Atlanta.