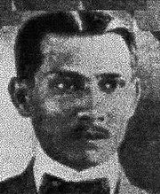 Overview
The Filipino people or Filipinos are an Austronesian ethnic group
Ethnic group
An ethnic group is a group of people whose members identify with each other, through a common heritage, often consisting of a common language, a common culture and/or an ideology that stresses common ancestry or endogamy...
native to the islands of the Philippines
Philippines
The Philippines , officially known as the Republic of the Philippines , is a country in Southeast Asia in the western Pacific Ocean. To its north across the Luzon Strait lies Taiwan. West across the South China Sea sits Vietnam...
. There are about 92 million Filipinos in the Philippines, and about 11 million living outside the Philippines (including Guam
Guam
Guam is an organized, unincorporated territory of the United States located in the western Pacific Ocean. It is one of five U.S. territories with an established civilian government. Guam is listed as one of 16 Non-Self-Governing Territories by the Special Committee on Decolonization of the United...
and Hawaii
Hawaii
Hawaii is the newest of the 50 U.S. states , and is the only U.S. state made up entirely of islands. It is the northernmost island group in Polynesia, occupying most of an archipelago in the central Pacific Ocean, southwest of the continental United States, southeast of Japan, and northeast of...
).

I need information of 5 Notable Important filipino Americans and their contributions.
More

What is the difference of cabeza de barangay, barangay captain and datu? pls give me a specific answer thx
More
x