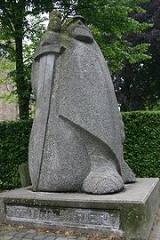 Encyclopedia
A folk hero is a type of hero
Hero
A hero , in Greek mythology and folklore, was originally a demigod, their cult being one of the most distinctive features of ancient Greek religion...
, real, fictional, or mythological
Mythology
The term mythology can refer either to the study of myths, or to a body or collection of myths. As examples, comparative mythology is the study of connections between myths from different cultures, whereas Greek mythology is the body of myths from ancient Greece...
. The single salient characteristic which makes a character a folk hero is the imprinting of the name, personality and deeds of the character in the popular consciousness. This presence in the popular consciousness is evidenced by mention in folk songs
Folk music
Folk music is an English term encompassing both traditional folk music and contemporary folk music. The term originated in the 19th century. Traditional folk music has been defined in several ways: as music transmitted by mouth, as music of the lower classes, and as music with unknown composers....
, folk tales and other folklore
Folklore
Folklore consists of legends, music, oral history, proverbs, jokes, popular beliefs, fairy tales and customs that are the traditions of a culture, subculture, or group. It is also the set of practices through which those expressive genres are shared. The study of folklore is sometimes called...
. Folk heroes are also the subject of literature and some films. 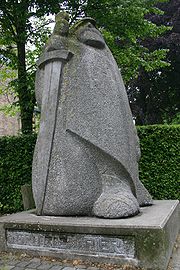 The folk hero often begins life as a normal person, but is transformed into someone extraordinary by significant life events, often in response to social injustice, and sometimes in response to natural disasters.

One major category of folk hero is the defender of the common people against the oppression or corruption of the established power structure. Members of this category of folk hero often, but not necessarily, live outside the law
Outlaw
In historical legal systems, an outlaw is declared as outside the protection of the law. In pre-modern societies, this takes the burden of active prosecution of a criminal from the authorities. Instead, the criminal is withdrawn all legal protection, so that anyone is legally empowered to persecute...
in some way.


Folk heroes known to be fictional