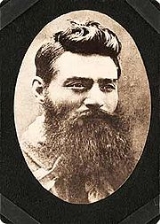 Overview
Edward "Ned" Kelly was an Irish Australian
Irish Australian
Irish Australians have played a long and enduring part in Australia's history. Many came to Australia in the eighteenth century as settlers or as convicts, and contributed to Australia's development in many different areas....
bushranger
Bushranger
Bushrangers, or bush rangers, originally referred to runaway convicts in the early years of the British settlement of Australia who had the survival skills necessary to use the Australian bush as a refuge to hide from the authorities...
. He is considered by some to be merely a cold-blooded cop killer
Cop Killer
Cop Killer or cop killer may refer to:*A person who kills a police officer*"Cop Killer" , a 1992 song by Body Count*Cop Killer , the English translation of the ninth book in the detective series written by Sjöwall and Wahlöö...
— others, however, consider him to be a folk hero
Folk hero
A folk hero is a type of hero, real, fictional, or mythological. The single salient characteristic which makes a character a folk hero is the imprinting of the name, personality and deeds of the character in the popular consciousness. This presence in the popular consciousness is evidenced by...
and symbol of Irish Australian resistance against the Anglo-Australian ruling class
Ruling class
The term ruling class refers to the social class of a given society that decides upon and sets that society's political policy - assuming there is one such particular class in the given society....
.

Kelly was born in Victoria
Victoria (Australia)
Victoria is the second most populous state in Australia. Geographically the smallest mainland state, Victoria is bordered by New South Wales, South Australia, and Tasmania on Boundary Islet to the north, west and south respectively....
to an Irish convict
Convicts in Australia
During the late 18th and 19th centuries, large numbers of convicts were transported to the various Australian penal colonies by the British government. One of the primary reasons for the British settlement of Australia was the establishment of a penal colony to alleviate pressure on their...
father, and as a young man he clashed with the Victoria Police
Victoria Police
Victoria Police is the primary law enforcement agency of Victoria, Australia. , the Victoria Police has over 12,190 sworn members, along with over 400 recruits, reservists and Protective Service Officers, and over 2,900 civilian staff across 393 police stations.-Early history:The Victoria Police...
. Following an incident at his home in 1878, police parties searched for him in the bush.

What are the names and details of Police reprimanded, demoted, or dismissed after the Ned Kelly Royal commission?

I have seen as many as eleven, big & ugly enough to lift Mount Macedon out of a crab hole more like the species of a baboon or Guerilla than a man.

but I am a widows son outlawed and my orders must be obeyed.

... Perhaps not from what you now conceive, but if you had heard me examine the witnesses it would have been different.

... my mind is as easy as the mind of any man in this world, as I am prepared to show before God and man.

More men than I have put men to death, but I am the last man in the world that would take a man's life. Two years ago — even if my own life was at stake — and I am confident, if I thought a man would shoot me — I would give him a chance of keeping his life, and would part with my own; but if I knew that through him innocent persons' lives were at stake, I certainly would have to shoot him if he forced me to do so; but I would want to know that he was really going to take my innocent life.

I dare say; but a day will come, at a bigger Court than this, when we shall see which is right and which is wrong. No matter how long a man lives he is bound to come to judgement somewhere, and as well here as anywhere. It will be different the next time there is a Kelly trial; for they are not all killed. It would have been good for the Crown had I examined the witnesses, and I would have stopped a lot of the reward, I can assure you, and I don't know but I won't do it yet if allowed.

That is how the evidence came out here. It appeared that I deliberately took up arms, of my own accord, and induced the other three to join me, for the purpose of doing nothing but shooting down the police ...