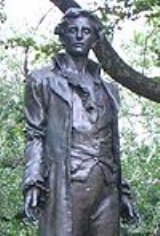 Overview
Nathan Hale was a soldier for the Continental Army
Continental Army
The Continental Army was formed after the outbreak of the American Revolutionary War by the colonies that became the United States of America. Established by a resolution of the Continental Congress on June 14, 1775, it was created to coordinate the military efforts of the Thirteen Colonies in...
during the American Revolutionary War
American Revolutionary War
The American Revolutionary War , the American War of Independence, or simply the Revolutionary War, began as a war between the Kingdom of Great Britain and thirteen British colonies in North America, and ended in a global war between several European great powers.The war was the result of the...
. He volunteered for an intelligence-gathering mission in New York City
New York City
New York is the most populous city in the United States and the center of the New York Metropolitan Area, one of the most populous metropolitan areas in the world. New York exerts a significant impact upon global commerce, finance, media, art, fashion, research, technology, education, and...
but was captured by the British. He is probably best remembered for his purported last words before being hanged: "I only regret that I have but one life to give for my country."
Hale has long been considered an American hero and, in 1985, he was officially designated the state hero of Connecticut.
Nathan Hale was born in Coventry, Connecticut
Coventry, Connecticut
Coventry is a town in Tolland County, Connecticut, United States. The population was 11,504 at the 2000 census. The birthplace of Captain Nathan Hale, Coventry is home to the Nathan Hale Homestead, which is now a museum open to the public....
in 1755 to Richard Hale and Elizabeth Strong.

Who wrote this report on Nathan hale?

What was nathan hale wearing when he was hung??
More