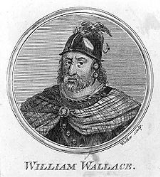 Overview
Sir William Wallace was a Scottish
Scottish people
The Scottish people , or Scots, are a nation and ethnic group native to Scotland. Historically they emerged from an amalgamation of the Picts and Gaels, incorporating neighbouring Britons to the south as well as invading Germanic peoples such as the Anglo-Saxons and the Norse.In modern use,...
knight
Knight
A knight was a member of a class of lower nobility in the High Middle Ages.By the Late Middle Ages, the rank had become associated with the ideals of chivalry, a code of conduct for the perfect courtly Christian warrior....
and landowner who became one of the main leaders during the Wars of Scottish Independence
Wars of Scottish Independence
The Wars of Scottish Independence were a series of military campaigns fought between the independent Kingdom of Scotland and the Kingdom of England in the late 13th and early 14th centuries....
.

Along with Andrew Moray
Andrew Moray
Andrew Moray , also known as Andrew de Moray, Andrew of Moray, or Andrew Murray, was a prominent military leader of patriotic forces during the Scottish Wars of Independence. He led the rising in northern Scotland in the summer of 1297 against the occupation by King Edward I of England,...
, Wallace defeated an English army at the Battle of Stirling Bridge
Battle of Stirling Bridge
The Battle of Stirling Bridge was a battle of the First War of Scottish Independence. On 11 September 1297, the forces of Andrew Moray and William Wallace defeated the combined English forces of John de Warenne, 6th Earl of Surrey and Hugh de Cressingham near Stirling, on the River Forth.-The main...
in 1297, and was Guardian of Scotland
Guardian of Scotland
The Guardians of Scotland were the de facto heads of state of Scotland during the First Interregnum of 1290–1292, and the Second Interregnum of 1296–1306...
, serving until his defeat at the Battle of Falkirk
Battle of Falkirk (1298)
The Battle of Falkirk, which took place on 22 July 1298, was one of the major battles in the First War of Scottish Independence...
. In 1305, Wallace was captured in Robroyston
Robroyston
Robroyston is a northeastern suburb of the city of Glasgow, Scotland. It was where Scottish leader William Wallace was turned over to English soldiers in 1305. At the site of Wallace's capture there stands a monument — there have also been proposals put forward for a Visitors Centre in the area,...
near Glasgow
Glasgow
Glasgow is the largest city in Scotland and third most populous in the United Kingdom. The city is situated on the River Clyde in the country's west central lowlands...
and handed over to King Edward I of England
Edward I of England
Edward I , also known as Edward Longshanks and the Hammer of the Scots, was King of England from 1272 to 1307. The first son of Henry III, Edward was involved early in the political intrigues of his father's reign, which included an outright rebellion by the English barons...
, who had him hanged, drawn, and quartered for high treason
High treason
High treason is criminal disloyalty to one's government. Participating in a war against one's native country, attempting to overthrow its government, spying on its military, its diplomats, or its secret services for a hostile and foreign power, or attempting to kill its head of state are perhaps...
and crimes against English civilians.

Since his death, Wallace has obtained an iconic status far beyond his homeland.

How has he been portrayed in fiction?