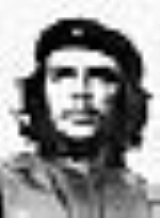 Overview
Ernesto "Che" Guevara (ˈtʃe geˈβaɾa; June 14, 1928 – October 9, 1967), commonly known as el Che or simply Che, was an Argentine
Argentina
Argentina , officially the Argentine Republic , is the second largest country in South America by land area, after Brazil. It is constituted as a federation of 23 provinces and an autonomous city, Buenos Aires...
Marxist
Marxism
Marxism is an economic and sociopolitical worldview and method of socioeconomic inquiry that centers upon a materialist interpretation of history, a dialectical view of social change, and an analysis and critique of the development of capitalism. Marxism was pioneered in the early to mid 19th...
revolutionary
Revolutionary
A revolutionary is a person who either actively participates in, or advocates revolution. Also, when used as an adjective, the term revolutionary refers to something that has a major, sudden impact on society or on some aspect of human endeavor.-Definition:...
, physician, author, intellectual
Intellectual
An intellectual is a person who uses intelligence and critical or analytical reasoning in either a professional or a personal capacity.- Terminology and endeavours :"Intellectual" can denote four types of persons:...
, guerrilla leader, diplomat
Diplomat
A diplomat is a person appointed by a state to conduct diplomacy with another state or international organization. The main functions of diplomats revolve around the representation and protection of the interests and nationals of the sending state, as well as the promotion of information and...
and military theorist. A major figure of the Cuban Revolution
Cuban Revolution
The Cuban Revolution was an armed revolt by Fidel Castro's 26th of July Movement against the regime of Cuban dictator Fulgencio Batista between 1953 and 1959. Batista was finally ousted on 1 January 1959, and was replaced by a revolutionary government led by Castro...
, his stylized visage has become a ubiquitous countercultural
Counterculture
Counterculture is a sociological term used to describe the values and norms of behavior of a cultural group, or subculture, that run counter to those of the social mainstream of the day, the cultural equivalent of political opposition. Counterculture can also be described as a group whose behavior...
symbol of rebellion
Rebellion
Rebellion, uprising or insurrection, is a refusal of obedience or order. It may, therefore, be seen as encompassing a range of behaviors aimed at destroying or replacing an established authority such as a government or a head of state...
and global insignia within popular culture
Che Guevara in popular culture
Appearances of Argentine Marxist revolutionary Che Guevara in popular culture are common throughout the world. Although during his lifetime he was a highly politicized and controversial figure, in death his stylized image has been transformed into a worldwide emblem for an array of causes,...
.

As a young medical student
Medical Student
Medical Student may refer to:*Someone studying at medical school*Medical Student Newspaper, a UK publication...
, Guevara traveled throughout Latin America
Latin America
Latin America is a region of the Americas where Romance languages  – particularly Spanish and Portuguese, and variably French – are primarily spoken. Latin America has an area of approximately 21,069,500 km² , almost 3.9% of the Earth's surface or 14.1% of its land surface area...
and was radically transformed by the endemic poverty
Poverty
Poverty is the lack of a certain amount of material possessions or money. Absolute poverty or destitution is inability to afford basic human needs, which commonly includes clean and fresh water, nutrition, health care, education, clothing and shelter. About 1.7 billion people are estimated to live...
and alienation
Marx's theory of alienation
Marx's theory of alienation , as expressed in the writings of the young Karl Marx , refers to the separation of things that naturally belong together, or to put antagonism between things that are properly in harmony...
he witnessed.

I knew that the moment the great governing spirit strikes the blow to divide all humanity into just two opposing factions, I would be on the side of the common people.

I am not Christ or a philanthropist, old lady, I am all the contrary of a Christ.... I fight for the things I believe in, with all the weapons at my disposal and try to leave the other man dead so that I don't get nailed to a cross or any other place.

I am not a liberator. Liberators do not exist. The people liberate themselves.

If it is an element of liberation for Latin America, I believe that it should have demonstrated that. Until now, I have not been aware of any such demonstration. The IMF performs an entirely different function: precisely that of ensuring that capital based outside of Latin America controls all of Latin America.

The interests of the IMF represent the big international interests that today seem to be established and concentrated in Wall Street.

Regarding the IMF, in an interview for Radio Rivadavia of Argentina (3 November 1959)
More
x