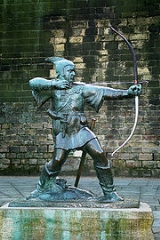 Overview
Robin Hood was a heroic
Hero
A hero , in Greek mythology and folklore, was originally a demigod, their cult being one of the most distinctive features of ancient Greek religion...
outlaw
Outlaw
In historical legal systems, an outlaw is declared as outside the protection of the law. In pre-modern societies, this takes the burden of active prosecution of a criminal from the authorities. Instead, the criminal is withdrawn all legal protection, so that anyone is legally empowered to persecute...
in English folklore
English folklore
English folklore is the folk tradition which has developed in England over a number of centuries. Some stories can be traced back to their roots, while the origin of others is uncertain or disputed...
. A highly skilled archer
Archer
An archer is a person who uses a bow and arrow; a practitioner of archery.- People with the surname Archer :* Jeffrey Archer, an English author and former politician.* Archer , the surname...
and swordsman, he is known for "robbing from the rich and giving to the poor", assisted by a group of fellow outlaws known as his "Merry Men
Merry Men
The Merry Men are the group of outlaws who followed Robin Hood, according to English folklore. An early use of the phrase "merry men" occurs in the oldest known Robin Hood ballad, "Robin Hood and the Monk", which survives in a manuscript completed around 1450. The word "merry" in this and other...
". Traditionally, Robin Hood and his men are depicted wearing Lincoln green
Lincoln green
Lincoln green is the color of dyed woollen cloth associated with Robin Hood and his merry men in Sherwood Forest, Nottinghamshire. The dyers of Lincoln, a cloth town in the high Middle Ages, produced the cloth by dyeing it with woad to give it a strong blue, then overdyeing it yellow with weld or...
clothes.. The origin of the legend is claimed by some to have stemmed from actual outlaws, or from ballads or tales of outlaws.

Robin Hood became a popular folk figure in the medieval
Middle Ages
The Middle Ages is a periodization of European history from the 5th century to the 15th century. The Middle Ages follows the fall of the Western Roman Empire in 476 and precedes the Early Modern Era. It is the middle period of a three-period division of Western history: Classic, Medieval and Modern...
period continuing through to modern literature, films and television.

What is the education of robin of loxley
More

What are some sources for the Robin Hood tales?

How do the stories change with time?

What are some of the most well-known of the Robin Hood tales?

What are some of the earliest references to Robin Hood?

Where did robin hood come from