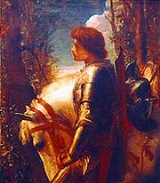 Overview
A hero , in Greek mythology
Greek mythology
Greek mythology is the body of myths and legends belonging to the ancient Greeks, concerning their gods and heroes, the nature of the world, and the origins and significance of their own cult and ritual practices. They were a part of religion in ancient Greece...
and folklore
Folklore
Folklore consists of legends, music, oral history, proverbs, jokes, popular beliefs, fairy tales and customs that are the traditions of a culture, subculture, or group. It is also the set of practices through which those expressive genres are shared. The study of folklore is sometimes called...
, was originally a demigod
Demigod
The term "demigod" , meaning "half-god", is commonly used to describe mythological figures whose one parent was a god and whose other parent was human; as such, demigods are human-god hybrids...
, their cult
Greek hero cult
Hero cults were one of the most distinctive features of ancient Greek religion. In Homeric Greek, "hero" refers to a man who was fighting on either side during the Trojan War...
being one of the most distinctive features of ancient Greek religion. Later, hero (male) and heroine (female) came to refer to characters
Character (arts)
A character is the representation of a person in a narrative work of art . Derived from the ancient Greek word kharaktêr , the earliest use in English, in this sense, dates from the Restoration, although it became widely used after its appearance in Tom Jones in 1749. From this, the sense of...
who, in the face of danger and adversity or from a position of weakness, display courage
Courage
Courage is the ability to confront fear, pain, danger, uncertainty, or intimidation...
and the will for self sacrifice—that is, heroism—for some greater good
Value theory
Value theory encompasses a range of approaches to understanding how, why and to what degree people should value things; whether the thing is a person, idea, object, or anything else. This investigation began in ancient philosophy, where it is called axiology or ethics. Early philosophical...
of all humanity. This definition originally referred to martial
Warrior
A warrior is a person skilled in combat or warfare, especially within the context of a tribal or clan-based society that recognizes a separate warrior class.-Warrior classes in tribal culture:...
courage or excellence but extended to more general moral
Morality
Morality is the differentiation among intentions, decisions, and actions between those that are good and bad . A moral code is a system of morality and a moral is any one practice or teaching within a moral code...
excellence.

Stories of heroism may serve as moral example
Moral example
Moral example is trust in the moral core of another, a role model. It was cited by Confucius, Muhammad, Mohandas Gandhi and other important philosophers and theologians as the prime duty of a ruler - including the head of a family or the owner of a business....
s.