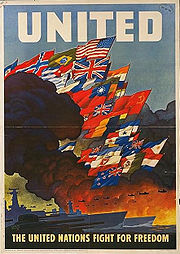 The Declaration by United Nations was a World War II
World War II
World War II, or the Second World War , was a global conflict lasting from 1939 to 1945, involving most of the world's nations—including all of the great powers—eventually forming two opposing military alliances: the Allies and the Axis...
document agreed to on January 1, 1942 during the Arcadia Conference
Arcadia Conference
The First Washington Conference, also known as the Arcadia Conference , was held in Washington, D.C. from December 22, 1941 to January 14, 1942. It was the first meeting on military strategy between the heads of government of the United Kingdom and the United States following the United States'...
by 26 governments: the Allied "Big Four" (the USA, the UK, the USSR, and China), nine American allies in Central America and the Caribbean, the four British Dominions, British India, and eight Allied governments-in-exile, for a total of twenty-six nations.

During December 1941, Roosevelt devised the name "United Nations" for the Allies of World War II
Allies of World War II
The Allies of World War II were the countries that opposed the Axis powers during the Second World War . Former Axis states contributing to the Allied victory are not considered Allied states...
, and the Declaration by United Nations, on 1 January 1942, was the basis of the modern UN. The term United Nations became synonymous during the war with the Allies and was considered to be the formal name that they were fighting under. The text of the declaration affirmed the signatories' perspective "that complete victory over their enemies is essential to defend life, liberty, independence and religious freedom, and to preserve human rights and justice in their own lands as well as in other lands, and that they are now engaged in a common struggle against savage and brutal forces seeking to subjugate the world". The principle of "complete victory" established an early precedent for the Allied policy of obtaining the Axis' powers' "unconditional surrender". The defeat of "Hitlerism" constituted the overarching objective, and represented a common Allied perspective that the totalitarian militarist regimes ruling Germany, Italy, and Japan were indistinguishable. The declaration, furthermore, "upheld the Wilsonian principles of self determination," thus linking U.S. war aims in both world wars.

By the end of the war, a number of other states had acceded to the declaration, including the Philippines, France, every Latin American state except Argentina, and the various independent states of the Middle East and Africa. Although most of the minor Axis powers had switched sides and joined the United Nations as co-belligerents against Germany by the end of the war, they were not allowed to accede to the declaration.

The parties pledged to uphold the Atlantic Charter
Atlantic Charter
The Atlantic Charter was a pivotal policy statement first issued in August 1941 that early in World War II defined the Allied goals for the post-war world. It was drafted by Britain and the United States, and later agreed to by all the Allies...
, to employ all their resources in the war against the Axis powers
Axis Powers
The Axis powers , also known as the Axis alliance, Axis nations, Axis countries, or just the Axis, was an alignment of great powers during the mid-20th century that fought World War II against the Allies. It began in 1936 with treaties of friendship between Germany and Italy and between Germany and...
, and that none of the signatory nations would seek to negotiate a separate peace
Separate peace
The phrase "separate peace" refers to a nation's agreement to cease military hostilities with another, even though the former country had previously entered into a military alliance with other states that remain at war with the latter country...
with Nazi Germany
Nazi Germany
Nazi Germany , also known as the Third Reich , but officially called German Reich from 1933 to 1943 and Greater German Reich from 26 June 1943 onward, is the name commonly used to refer to the state of Germany from 1933 to 1945, when it was a totalitarian dictatorship ruled by...
or Japan
Japan
Japan is an island nation in East Asia. Located in the Pacific Ocean, it lies to the east of the Sea of Japan, China, North Korea, South Korea and Russia, stretching from the Sea of Okhotsk in the north to the East China Sea and Taiwan in the south...
in the same manner that the nations of the Triple Entente
Triple Entente
The Triple Entente was the name given to the alliance among Britain, France and Russia after the signing of the Anglo-Russian Entente in 1907....
had agreed not to negotiate a separate peace with any or all of the Central Powers
Central Powers
The Central Powers were one of the two warring factions in World War I , composed of the German Empire, the Austro-Hungarian Empire, the Ottoman Empire, and the Kingdom of Bulgaria...
in World War I
World War I
World War I , which was predominantly called the World War or the Great War from its occurrence until 1939, and the First World War or World War I thereafter, was a major war centred in Europe that began on 28 July 1914 and lasted until 11 November 1918...
under the Unity Pact.