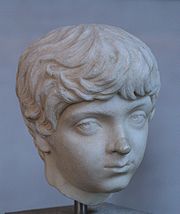 Damnatio memoriae is the Latin phrase literally meaning "condemnation of memory" in the sense of a judgment that a person must not be remembered. It was a form of dishonor that could be passed by the Roman Senate
Roman Senate
The Senate of the Roman Republic was a political institution in the ancient Roman Republic, however, it was not an elected body, but one whose members were appointed by the consuls, and later by the censors. After a magistrate served his term in office, it usually was followed with automatic...
upon traitors
Treason
In law, treason is the crime that covers some of the more extreme acts against one's sovereign or nation. Historically, treason also covered the murder of specific social superiors, such as the murder of a husband by his wife. Treason against the king was known as high treason and treason against a...
or others who brought discredit to the Roman State. The result is to erase someone from history.

The sense of the expression damnatio memoriae and of the sanction is to cancel every trace of the person from the life of Rome, as if he had never existed, in order to preserve the honour of the city; in a city that stressed the social appearance, respectability and the pride of being a true Roman as a fundamental requirement of the citizen, it was perhaps the most severe punishment.

In Ancient Rome, the practice of damnatio memoriae was the condemnation of Roman elites and emperors after their deaths. If the Senate or a later emperor did not like the acts of an individual, they could have his property seized, his name erased and his statues reworked. Because there is an economic incentive to seize property and rework statues anyway, historians and archaeologists have had difficulty determining when official damnatio memoriae actually took place, although it seems to have been quite rare.

Historians sometimes use the phrase de facto damnatio memoriae when the condemnation is not official. Among those few who did suffer legal damnatio memoriae were Sejanus
Sejanus
Lucius Aelius Seianus , commonly known as Sejanus, was an ambitious soldier, friend and confidant of the Roman Emperor Tiberius...
, who had conspired against emperor Tiberius
Tiberius
Tiberius , was Roman Emperor from 14 AD to 37 AD. Tiberius was by birth a Claudian, son of Tiberius Claudius Nero and Livia Drusilla. His mother divorced Nero and married Augustus in 39 BC, making him a step-son of Octavian...
in 31, and later Livilla
Livilla
Livia Julia was the only daughter of Nero Claudius Drusus and Antonia Minor and sister of the Roman Emperor Claudius and Germanicus...
, who was revealed to be his accomplice. Only three emperors are known to have officially received a damnatio memoriae. These were Domitian
Domitian
Domitian was Roman Emperor from 81 to 96. Domitian was the third and last emperor of the Flavian dynasty.Domitian's youth and early career were largely spent in the shadow of his brother Titus, who gained military renown during the First Jewish-Roman War...
whose violent death in 96 ended the Flavian Dynasty
Flavian dynasty
The Flavian dynasty was a Roman Imperial Dynasty, which ruled the Roman Empire between 69 and 96 AD, encompassing the reigns of Vespasian , and his two sons Titus and Domitian . The Flavians rose to power during the civil war of 69, known as the Year of the Four Emperors...
, the co-emperor Publius Septimius Geta
Publius Septimius Geta
Geta , was a Roman Emperor co-ruling with his father Septimius Severus and his older brother Caracalla from 209 to his death.-Early life:Geta was the younger son of Septimius Severus by his second wife Julia Domna...
, whose memory was publicly expunged by his co-emperor brother Caracalla
Caracalla
Caracalla , was Roman emperor from 198 to 217. The eldest son of Septimius Severus, he ruled jointly with his younger brother Geta until he murdered the latter in 211...
after he murdered him in 211, and in 311 Maximian
Maximian
Maximian was Roman Emperor from 286 to 305. He was Caesar from 285 to 286, then Augustus from 286 to 305. He shared the latter title with his co-emperor and superior, Diocletian, whose political brain complemented Maximian's military brawn. Maximian established his residence at Trier but spent...
, who was captured by Constantine the Great and then encouraged to commit suicide.

Any truly effective damnatio memoriae would not be noticeable to later historians, since by definition, it would entail the complete and total erasure of the individual in question from the historical record. However, since all political figures have allies as well as enemies, it was difficult to implement the practice completely. For instance, the Senate wanted to condemn the memory of Caligula
Caligula
Caligula , also known as Gaius, was Roman Emperor from 37 AD to 41 AD. Caligula was a member of the house of rulers conventionally known as the Julio-Claudian dynasty. Caligula's father Germanicus, the nephew and adopted son of Emperor Tiberius, was a very successful general and one of Rome's most...
, but Claudius
Claudius
Claudius , was Roman Emperor from 41 to 54. A member of the Julio-Claudian dynasty, he was the son of Drusus and Antonia Minor. He was born at Lugdunum in Gaul and was the first Roman Emperor to be born outside Italy...
prevented this. Nero
Nero
Nero , was Roman Emperor from 54 to 68, and the last in the Julio-Claudian dynasty. Nero was adopted by his great-uncle Claudius to become his heir and successor, and succeeded to the throne in 54 following Claudius' death....
was declared an enemy of the state by the Senate, but then given an enormous funeral honoring him after his death by Vitellius
Vitellius
Vitellius , was Roman Emperor for eight months, from 16 April to 22 December 69. Vitellius was acclaimed Emperor following the quick succession of the previous emperors Galba and Otho, in a year of civil war known as the Year of the Four Emperors...
. While statues of some emperors were destroyed or reworked after their death, others were erected. Also, many coins with the images of the discredited person continued to circulate. A particularly large number exist with Geta's image.


Similar practices in other societies

Many contemporary novels and films mention a form of damnatio memoriae. Two early examples are the "vapourization" of "unpersons" in George Orwell
George Orwell
Eric Arthur Blair , better known by his pen name George Orwell, was an English author and journalist...
's 1949 dystopia
Dystopia
A dystopia is the idea of a society in a repressive and controlled state, often under the guise of being utopian, as characterized in books like Brave New World and Nineteen Eighty-Four...
n novel
Novel
A novel is a book of long narrative in literary prose. The genre has historical roots both in the fields of the medieval and early modern romance and in the tradition of the novella. The latter supplied the present generic term in the late 18th century....
Nineteen Eighty-Four
Nineteen Eighty-Four
Nineteen Eighty-Four by George Orwell is a dystopian novel about Oceania, a society ruled by the oligarchical dictatorship of the Party...
("He did not exist; he never existed"); and the reference to the Egyptian practice in the 1956 movie The Ten Commandments
The Ten Commandments (1956 film)
The Ten Commandments is a 1956 American epic film that dramatized the biblical story of the Exodus, in which the Hebrew-born Moses, an adopted Egyptian prince, becomes the deliverer of the Hebrew slaves. The film, released by Paramount Pictures in VistaVision on October 5, 1956, was directed by...
, in which the Pharaoh Seti orders the name of Moses
Moses
Moses was, according to the Hebrew Bible and Qur'an, a religious leader, lawgiver and prophet, to whom the authorship of the Torah is traditionally attributed...
be struck from every building and never mentioned by anyone.

More recent authors who have used damnatio memoriae as a plot device include Milan Kundera
Milan Kundera
Milan Kundera , born 1 April 1929, is a writer of Czech origin who has lived in exile in France since 1975, where he became a naturalized citizen in 1981. He is best known as the author of The Unbearable Lightness of Being, The Book of Laughter and Forgetting, and The Joke. Kundera has written in...
in his 1979 novel The Book of Laughter and Forgetting
The Book of Laughter and Forgetting
The Book of Laughter and Forgetting is a novel by Milan Kundera, published in 1979. It is composed of seven separate narratives united by some common themes. The book considers the nature of forgetting as it occurs in history, politics and life in general...
, R.A. Salvatore in the 1990 novel Homeland, Lois Lowry
Lois Lowry
Lois Lowry is an American author of children's literature. She began her career as a photographer and a freelance journalist during the early 1970s...
in her 1993 novel The Giver
The Giver
The Giver is a 1993 soft science fiction novel by Lois Lowry. It is set in a society which is at first presented as a utopian society and gradually appears more and more dystopian. The novel follows a boy named Jonas through the twelfth year of his life...
(a version in which the damned name is never given to any new baby ever again), and Brian Herbert and Kevin J. Anderson in their 1999 Prelude to Dune
Prelude to Dune
Prelude to Dune is a prequel trilogy of novels written by Brian Herbert and Kevin J. Anderson, set in Frank Herbert's Dune universe....
trilogy. Another occurrence of this plot device is prevalent in the fantasy novel Prince of the Blood
Prince of the Blood (novel)
Prince of the Blood is a fantasy novel by Raymond E. Feist. It is the first book of the Krondor's Sons series and was published in 1989. It was later followed by The King's Buccaneer in 1992. A 15th anniversary "author's preferred" edition with portions of the book significantly rewritten was...
by Raymond E. Feist
Raymond E. Feist
Raymond Elias Feist is an American author who primarily writes fantasy fiction. He is best known for The Riftwar Cycle series of novels and short stories. His books have been translated into multiple languages and have sold over 15 million copies.- Biography :Raymond E...
.

The device has also appeared in the American television series Star Trek: The Next Generation
Star Trek: The Next Generation
Star Trek: The Next Generation is an American science fiction television series created by Gene Roddenberry as part of the Star Trek franchise. Roddenberry, Rick Berman, and Michael Piller served as executive producers at different times throughout the production...
as the Klingon
Klingon
Klingons are a fictional warrior race in the Star Trek universe.Klingons are recurring villains in the 1960s television show Star Trek: The Original Series, and have appeared in all five spin-off series and eight feature films...
practice of discommendation; as a threat in Ancient Greek and Persian culture in Frank Miller
Frank Miller (comics)
Frank Miller is an American comic book artist, writer and film director best known for his dark, film noir-style comic book stories and graphic novels Ronin, Daredevil: Born Again, Batman: The Dark Knight Returns, Sin City and 300...
's 1998 comic book series 300 and its 2007 film adaptation
300 (film)
300 is a 2007 American fantasy action film based on the 1998 comic series of the same name by Frank Miller. It is a fictionalized retelling of the Battle of Thermopylae. The film was directed by Zack Snyder, while Miller served as executive producer and consultant...
; and in the 2004 role playing game Vampire the Requiem.