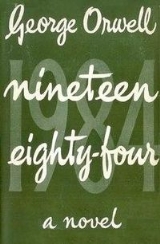 Overview
Nineteen Eighty-Four (first published in 1949) by George Orwell
George Orwell
Eric Arthur Blair , better known by his pen name George Orwell, was an English author and journalist...
is a dystopia
Dystopia
A dystopia is the idea of a society in a repressive and controlled state, often under the guise of being utopian, as characterized in books like Brave New World and Nineteen Eighty-Four...
n novel about Oceania, a society ruled by the oligarchical
Oligarchy
Oligarchy is a form of power structure in which power effectively rests with an elite class distinguished by royalty, wealth, family ties, commercial, and/or military legitimacy...
dictatorship
Dictatorship
A dictatorship is defined as an autocratic form of government in which the government is ruled by an individual, the dictator. It has three possible meanings:...
of the Party
Ingsoc
Ingsoc is the political ideology of the totalitarian government of Oceania in George Orwell's dystopian science fiction novel Nineteen Eighty-Four.-Fictionalised origin of Ingsoc:...
. Life in the Oceanian province of Airstrip One is a world of perpetual war
Perpetual war
Perpetual war refers to a lasting state of war with no clear ending conditions. It also describes a situation of ongoing tension that seems likely to escalate at any moment, similar to the Cold War.-In past history:...
, pervasive government surveillance, and incessant public mind control
Mind control
Mind control refers to a process in which a group or individual "systematically uses unethically manipulative methods to persuade others to conform to the wishes of the manipulator, often to the detriment of the person being manipulated"...
, accomplished with a political system euphemistically named English Socialism (Ingsoc)
Ingsoc
Ingsoc is the political ideology of the totalitarian government of Oceania in George Orwell's dystopian science fiction novel Nineteen Eighty-Four.-Fictionalised origin of Ingsoc:...
, which is administrated by a privileged Inner Party elite. Yet they too are subordinated to the totalitarian cult of personality
Cult of personality
A cult of personality arises when an individual uses mass media, propaganda, or other methods, to create an idealized and heroic public image, often through unquestioning flattery and praise. Cults of personality are usually associated with dictatorships...
of Big Brother, the deified Party leader who rules with a philosophy that decries individuality and reason as thoughtcrime
Thoughtcrime
In the dystopian novel Nineteen Eighty-Four by George Orwell, a thoughtcrime is an illegal type of thought.In the book, the government attempts to control not only the speech and actions, but also the thoughts of its subjects, labelling disapproved thought as thoughtcrime or, in Newspeak,...
s; thus the people of Oceania are subordinated to a supposed collective greater good.

I have read both '1984' and 'Brave New World'. I preferred 1984. I have seen in many sites people saying how Brave New World is far more accurate than...
More

It was a bright cold day in April, and the clocks were striking thirteen.

DOWN WITH BIG BROTHER

Then the face of Big Brother faded away again and instead the three slogans of the Party stood out in bold capitals:WAR IS PEACEFREEDOM IS SLAVERYIGNORANCE IS STRENGTH

Whether he went on with the diary, or whether he did not go on with it, made no difference. The Thought Police would get him just the same. He had committed— would still have committed, even if he had never set pen to paper— the essential crime that contained all others in itself. Thoughtcrime|Thoughtcrime, they called it. Thoughtcrime was not a thing that could be concealed forever.

Nothing was your own except the few cubic centimetres inside your skull.

Tragedy, he perceived, belonged to the ancient time.