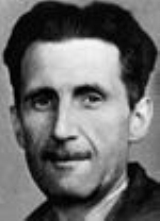 Overview
Eric Arthur Blair better known by his pen name George Orwell, was an English author and journalist. His work is marked by keen intelligence and wit, a profound awareness of social injustice
Social injustice
Social injustice is a concept relating to the claimed unfairness or injustice of a society in its divisions of rewards and burdens and other incidental inequalities...
, an intense opposition to totalitarianism
Totalitarianism
Totalitarianism is a political system where the state recognizes no limits to its authority and strives to regulate every aspect of public and private life wherever feasible...
, a passion for clarity in language and a belief in democratic socialism
Democratic socialism
Democratic socialism is a description used by various socialist movements and organizations to emphasize the democratic character of their political orientation...
.

What good things did Orwell say about the British Empire? He was famous for his criticism of it, but I've heard that he thought it was better than oth...

What fictional victims are in Orwell's works?
More

They had their cynical code worked out. The public are swine; Advertising|advertising is the rattling of a stick inside a swill-bucket.

Since pacifists have more freedom of action in countries where traces of democracy survive, pacifism can act more effectively against democracy than for it. Objectively the pacifist is pro-Nazi.