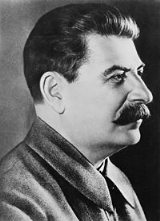 Who suffered and who prospered under Joseph Stalins ruling?.

I am searching many of web sites but I can't find what I look for. In 1949 in Bulgaria the was a speeh from Stalin to communist youth in the magazine ...

when did stalin become president

What were some negatives of his leadership?
More

Stalin before the Revolution

How did Stalin change Soviet culture?

1917    The People's Commissars give authority to Vladimir Lenin, Leon Trotsky, and Joseph Stalin.

1922    Joseph Stalin becomes the first General Secretary of the Communist Party of the Soviet Union.

1927    Leon Trotsky is expelled from the Soviet Communist Party, leaving Joseph Stalin in undisputed control of the Soviet Union.

1928    Boris Bazhanov defects through Iran. He is the only assistant of Joseph Stalin's secretariat to have defected from the Eastern Bloc.

1937    In Moscow, 17 leading Communists go on trial accused of participating in a plot led by Leon Trotsky to overthrow Joseph Stalin's regime and assassinate its leaders.

1941    Soviet leader Joseph Stalin consolidates the Commissariats of Home Affairs and National Security to form the NKVD and names Lavrenti Beria its chief.

1941    World War II: Soviet leader Joseph Stalin addresses the Soviet Union for only the second time during his three-decade rule. He states that even though 350,000 troops were killed in German attacks so far, the Germans had lost 4.5 million soldiers and that Soviet victory was near.

1942    World War II: Soviet leader Joseph Stalin issues Order No. 227 in response to alarming German advances into the Soviet Union. Under the order all those who retreat or otherwise leave their positions without orders to do so were to be immediately executed.

We think that a powerful and vigorous movement is impossible without differences — "true conformity" is possible only in the cemetery.

Anti-Semitism, as an extreme form of racial chauvinism, is the most dangerous vestige of cannibalism.

"Anti-Semitism: Reply to an inquiry of the Jewish News Agency in the United States" (12 January 1931)
More
x