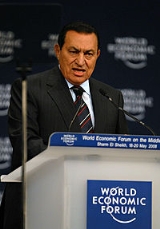 Overview
Muhammad Hosni Sayyid Mubarak is a former Egypt
Egypt
Egypt , officially the Arab Republic of Egypt, Arabic: , is a country mainly in North Africa, with the Sinai Peninsula forming a land bridge in Southwest Asia. Egypt is thus a transcontinental country, and a major power in Africa, the Mediterranean Basin, the Middle East and the Muslim world...
ian politician and military commander. He served as the fourth President of Egypt
President of Egypt
The President of the Arab Republic of Egypt is the head of state of Egypt.Under the Constitution of Egypt, the president is also the supreme commander of the armed forces and head of the executive branch of the Egyptian government....
from 1981 to 2011.

Ali Pasha Mubarak, 1823-1893, was in charge of education in Egypt and was a renowned educationist. Is he an ancestor of former President Hosny Mubarak...
More

Did Hosni Mubarek serve in the israeli army?
More
x