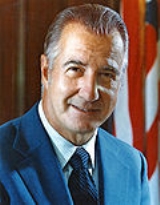 Overview
Spiro Theodore Agnew (ˈspɪroʊ ˈæɡnuː; November 9, 1918September 17, 1996) was the 39th Vice President of the United States (1969–1973), serving under President Richard Nixon
Richard Nixon
Richard Milhous Nixon was the 37th President of the United States, serving from 1969 to 1974. The only president to resign the office, Nixon had previously served as a US representative and senator from California and as the 36th Vice President of the United States from 1953 to 1961 under...
, and the 55th Governor of Maryland
Governor of Maryland
The Governor of Maryland heads the executive branch of the government of Maryland, and he is the commander-in-chief of the state's National Guard units. The Governor is the highest-ranking official in the state, and he has a broad range of appointive powers in both the State and local governments,...
(1967–1969). He was also the first Greek American
Greek American
Greek Americans are Americans of Greek descent also described as Hellenic descent. According to the 2007 U.S. Census Bureau estimation, there were 1,380,088 people of Greek ancestry in the United States, while the State Department mentions that around 3,000,000 Americans claim to be of Greek descent...
to hold these offices.

During his fifth year as Vice President, in the late summer of 1973, Agnew was under investigation by the United States Attorney
United States Attorney
United States Attorneys represent the United States federal government in United States district court and United States court of appeals. There are 93 U.S. Attorneys stationed throughout the United States, Puerto Rico, the U.S. Virgin Islands, Guam, and the Northern Mariana Islands...
's office in Baltimore
Baltimore
Baltimore is the largest independent city in the United States and the largest city and cultural center of the US state of Maryland. The city is located in central Maryland along the tidal portion of the Patapsco River, an arm of the Chesapeake Bay. Baltimore is sometimes referred to as Baltimore...
, Maryland, on charges of extortion
Extortion
Extortion is a criminal offence which occurs when a person unlawfully obtains either money, property or services from a person, entity, or institution, through coercion. Refraining from doing harm is sometimes euphemistically called protection. Extortion is commonly practiced by organized crime...
, tax fraud, bribery and conspiracy
Conspiracy (crime)
In the criminal law, a conspiracy is an agreement between two or more persons to break the law at some time in the future, and, in some cases, with at least one overt act in furtherance of that agreement...
.

A spirit of national masochism prevails, encouraged by an effete corps of impudent snobs who characterize themselves as intellectuals.

In the United States today, we have more than our share of the nattering nabobs of negativism.

Sing a song of Spiro Agnew and all the things he has done. (No other lyrics)

Boy! They're (MAD Magazine) really sockin' it to that Spiro Agnew guy again, he must work there or something.