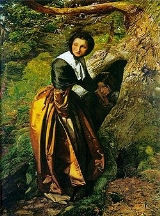 Proscription is a term used for the public identification and official condemnation of enemies of the state
Enemy of the state
An enemy of the state is a person accused of certain crimes against the state, such as treason. Describing individuals in this way is sometimes a manifestation of political repression. For example, an authoritarian regime may purport to maintain national security by describing social or political...
. It is defined by the Oxford English Dictionary
Oxford English Dictionary
The Oxford English Dictionary , published by the Oxford University Press, is the self-styled premier dictionary of the English language. Two fully bound print editions of the OED have been published under its current name, in 1928 and 1989. The first edition was published in twelve volumes , and...
as a "decree of condemnation to death or banishment" and is a heavily politically charged word, frequently used to refer to state-approved murder or persecution. Proscription implies the elimination en masse of political rivals or personal enemies, and the term is frequently used in connection with violent revolutions, most especially with the Reign of Terror
Reign of Terror
The Reign of Terror , also known simply as The Terror , was a period of violence that occurred after the onset of the French Revolution, incited by conflict between rival political factions, the Girondins and the Jacobins, and marked by mass executions of "enemies of...
in the French Revolution
French Revolution
The French Revolution , sometimes distinguished as the 'Great French Revolution' , was a period of radical social and political upheaval in France and Europe. The absolute monarchy that had ruled France for centuries collapsed in three years...
. The term is also used to express the political violence in Argentina
Argentina
Argentina , officially the Argentine Republic , is the second largest country in South America by land area, after Brazil. It is constituted as a federation of 23 provinces and an autonomous city, Buenos Aires...
against Peronist
Peronism
Peronism , or Justicialism , is an Argentine political movement based on the programmes associated with former President Juan Perón and his second wife, Eva Perón...
s after Perón
Juan Perón
Juan Domingo Perón was an Argentine military officer, and politician. Perón was three times elected as President of Argentina though he only managed to serve one full term, after serving in several government positions, including the Secretary of Labor and the Vice Presidency...
fled into exile.

Sulla used proscription to restore the depleted Roman Treasury (Aerarium)
Aerarium
Aerarium was the name given in Ancient Rome to the public treasury, and in a secondary sense to the public finances....
, which had been drained by costly civil and foreign wars in the preceding decade, and to eliminate enemies (both real and potential) of his reformed state and constitutions; the plutocratic
Plutocracy
Plutocracy is rule by the wealthy, or power provided by wealth. The combination of both plutocracy and oligarchy is called plutarchy. The word plutocracy is derived from the Ancient Greek root ploutos, meaning wealth and kratos, meaning to rule or to govern.-Usage:The term plutocracy is generally...
knights of the Ordo Equester were particularly hard-hit. Giving the procedure a particularly sinister character in the public eye was the fact that many of the proscribed men, escorted from their homes at night by groups of men all named "Lucius Cornelius," never appeared again. (These men, the Sullani, were all Sulla's freedmen.) This gave rise to a general fear of being taken from one's home at night as a consequence of any outwardly seditious behaviour.

Sulla's proscription was bureaucratically overseen, and the names of informers and those who profited from killing proscribed men were entered into the public record. Because Roman law could criminalise acts ex post facto
Ex post facto law
An ex post facto law or retroactive law is a law that retroactively changes the legal consequences of actions committed or relationships that existed prior to the enactment of the law...
, many informers and profiteers were later prosecuted. The procedure was overseen by his freedman
Freedman
A freedman is a former slave who has been released from slavery, usually by legal means. Historically, slaves became freedmen either by manumission or emancipation ....
steward, Lucius Cornelius Chrysogonus
Lucius Cornelius Chrysogonus
Lucius Cornelius Chrysogonus was a Greek freedman of Lucius Cornelius Sulla whom Sulla put in charge of the proscriptions of 82 BC. He was accused of corruption by Marcus Tullius Cicero during the trial of Sextus Roscius...
, and was rife with corruption.

Proscription was later revived by the Second Triumvirate
Second Triumvirate
The Second Triumvirate is the name historians give to the official political alliance of Octavius , Marcus Aemilius Lepidus, and Mark Antony, formed on 26 November 43 BC with the enactment of the Lex Titia, the adoption of which marked the end of the Roman Republic...
in November 43 BC
43 BC
Year 43 BC was either a common year starting on Sunday, Monday or Tuesday or a leap year starting on Sunday or Monday of the Julian calendar and a common year starting on Monday of the Proleptic Julian calendar...
, again to eliminate political enemies and to replenish the Treasury. Some of the proscribed enemies of the state were stripped of their property but protected from death by their relatives in the Triumvirate (e.g., Lucius Julius Caesar
Lucius Julius Caesar IV
Lucius Julius Caesar IV was the son of the consul of 90 BC, Lucius Julius Caesar III. He was the father of another Lucius Julius Caesar, the brother of Julia Antonia, and the uncle of the Brothers Antonii, Marcus, Gaius, and Lucius...
and Lepidus
Marcus Aemilius Lepidus (triumvir)
Marcus Aemilius Lepidus , was a Roman patrician who rose to become a member of the Second Triumvirate and Pontifex Maximus. His father, Marcus Aemilius Lepidus, had been involved in a rebellion against the Roman Republic.Lepidus was among Julius Caesar's greatest supporters...
' brother). Most were not so lucky; amongst the most prominent men to suffer death were the orator Cicero
Cicero
Marcus Tullius Cicero , was a Roman philosopher, statesman, lawyer, political theorist, and Roman constitutionalist. He came from a wealthy municipal family of the equestrian order, and is widely considered one of Rome's greatest orators and prose stylists.He introduced the Romans to the chief...
, his younger brother Quintus Tullius Cicero
Quintus Tullius Cicero
Quintus Tullius Cicero was the younger brother of the celebrated orator, philosopher and statesman Marcus Tullius Cicero. He was born into a family of the equestrian order, as the son of a wealthy landowner in Arpinum, some 100 kilometres south-east of Rome.- Biography :Cicero's well-to-do father...
(one of Julius Caesar
Julius Caesar
Gaius Julius Caesar was a Roman general and statesman and a distinguished writer of Latin prose. He played a critical role in the gradual transformation of the Roman Republic into the Roman Empire....
's legates
Legatus
A legatus was a general in the Roman army, equivalent to a modern general officer. Being of senatorial rank, his immediate superior was the dux, and he outranked all military tribunes...
) and Marcus Favonius
Marcus Favonius
Marcus Favonius was a Roman politician during the period of the fall of the Roman Republic. He is noted for his imitation of Cato the Younger, his espousal of the Cynic philosophy, and for his appearance as the Poet in William Shakespeare's play Julius Caesar.-Life:Favonius was born in around 90...
.