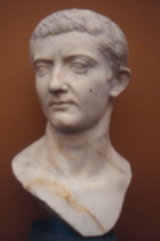 Overview
Tiberius was Roman Emperor
Roman Emperor
The Roman emperor was the ruler of the Roman State during the imperial period . The Romans had no single term for the office although at any given time, a given title was associated with the emperor...
from 14 AD to 37 AD. Tiberius was by birth a Claudian, son of Tiberius Claudius Nero
Tiberius Nero
Not to be confused with his son Tiberius or his grandson Germanicus, who both had the name 'Tiberius Claudius Nero' at one time or another. Tiberius Claudius Nero was a member of the Claudian Family of ancient Rome. He was a descendant of the original Tiberius Claudius Nero a consul, son of...
and Livia Drusilla
Livia
Livia Drusilla, , after her formal adoption into the Julian family in AD 14 also known as Julia Augusta, was a Roman empress as the third wife of the Emperor Augustus and his adviser...
. His mother divorced Nero and married Augustus
Augustus
Augustus ;23 September 63 BC – 19 August AD 14) is considered the first emperor of the Roman Empire, which he ruled alone from 27 BC until his death in 14 AD.The dates of his rule are contemporary dates; Augustus lived under two calendars, the Roman Republican until 45 BC, and the Julian...
in 39 BC, making him a step-son of Octavian. Tiberius would later marry Augustus' daughter Julia the Elder
Julia the Elder
Julia the Elder , known to her contemporaries as Julia Caesaris filia or Julia Augusti filia was the daughter and only biological child of Augustus, the first emperor of the Roman Empire. Augustus subsequently adopted several male members of his close family as sons...
(from his marriage to Scribonia
Scribonia
Scribonia was the second wife of the Roman Emperor Augustus and the mother of his only natural child, Julia the Elder. She was the mother-in-law of the Emperor Tiberius, great-grandmother of the Emperor Caligula and Empress Agrippina the Younger, grandmother-in-law of the Emperor Claudius, and...
) and even later be adopted by Augustus, by which act he officially became a Julian, bearing the name Tiberius Julius Caesar. The subsequent emperors after Tiberius would continue this blended dynasty of both families for the next forty years; historians have named it the Julio-Claudian dynasty
Julio-Claudian Dynasty
The Julio-Claudian dynasty normally refers to the first five Roman Emperors: Augustus, Tiberius, Caligula , Claudius, and Nero, or the family to which they belonged; they ruled the Roman Empire from its formation, in the second half of the 1st century BC, until AD 68, when the last of the line,...
.

What was his personalty

What is the contributiom of tiberious to the rome
More

37    Caligula becomes Roman Emperor after the death of his great uncle, Tiberius.

37    The Roman Senate annuls Tiberius's will and proclaims Caligula emperor.

In a free state there should be freedom of speech and thought.

If So-and-so challenges me, I shall lay before you a careful account of what I have said and done; if that does not satisfy him, I shall reciprocate his dislike of me.

Translation: A good shepherd shears his sheep, he doesn't flay them.
More
x