The centre of the city is on the west side of the old harbour, which is a widened section of the canal (Vlaardingse Vaart) which runs from Vlaardingen to Schipluiden
Schipluiden
Schipluiden is a village in the western Netherlands, in the province of South Holland. It is the seat of the council of the municipality of Midden-Delfland....
.

The area around Vlaardingen was already settled by about 2900BC to 2600BC. In 1990, a skeleton dated at about 1300 BC was dug up in the periphery of Vlaardingen; some human nuclear DNA
DNA
Deoxyribonucleic acid is a nucleic acid that contains the genetic instructions used in the development and functioning of all known living organisms . The DNA segments that carry this genetic information are called genes, but other DNA sequences have structural purposes, or are involved in...
was identified, the oldest found anywhere in the Netherlands. Between roughly 250 AD and 700 AD the region was uninhabited, like much of the west of the Netherlands. In 726 or 727 the area is again mentioned as Marsum, where a little church was established, around which Vlaardingen formed. 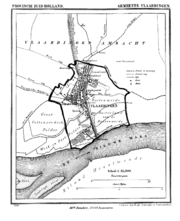 In 1018 Vlaardingen was a stronghold of Dirk III
Dirk III, Count of Holland
Dirk III was Count of Holland from 993 to May 27, 1039, until 1005 under regency of his mother. It is thought that Dirk III went on pilgrimage to the Holy Land around 1030, hence his nickname of Hierosolymita....
, who levied an illegal toll on ships on the Meuse river. An army sent by German Emperor Henry II
Henry II, Holy Roman Emperor
Henry II , also referred to as Saint Henry, Obl.S.B., was the fifth and last Holy Roman Emperor of the Ottonian dynasty, from his coronation in Rome in 1014 until his death a decade later. He was crowned King of the Germans in 1002 and King of Italy in 1004...
in order to stop this practice was defeated by Dirk III in the Battle of Vlaardingen
Battle of Vlaardingen
The Battle of Vlaardingen was fought on 29 July 1018. The German emperor sent an army towards western Frisia to subdue the rebellious Count Dirk III...
. In 1047, his successor Dirk IV
Dirk IV, Count of Holland
Dirk IV was Count of Holland from 1039 to 1049 . Dirk's date of birth is unknown but it was probably ca. 1030 or shortly before, he was described as "adolescent" at the time of his death. His base of operations was the stronghold his father built at Vlaardingen...
repelled another such attack.

The flood disaster of December 21, 1163 ended the growth of Vlaardingen. The Counts of Holland moved away and its development stagnated.

In 1273 Vlaardingen was granted city rights
City rights in the Netherlands
City rights are a medieval phenomenon in the history of the Low Countries. A liegelord, usually a count, duke or similar member of high nobility, granted a settlement he owned certain town privileges that settlements without city rights did not have....
by Floris V, Count of Holland
Floris V, Count of Holland
Count Floris V of Holland and Zeeland , "der Keerlen God" , is one of the most important figures of the first, native dynasty of Holland . His life was documented in detail in the Rijmkroniek by Melis Stoke, his chronicler...
.

In 1574, during the Eighty Years War of Dutch independence, a group of Watergeuzen burnt down Vlaardingen as commanded by William of Orange
William the Silent
William I, Prince of Orange , also widely known as William the Silent , or simply William of Orange , was the main leader of the Dutch revolt against the Spanish that set off the Eighty Years' War and resulted in the formal independence of the United Provinces in 1648. He was born in the House of...
to prevent the Spanish from capturing the city. Vlaardingen later became a shipbuilding area and a significant harbour for the herring
Herring
Herring is an oily fish of the genus Clupea, found in the shallow, temperate waters of the North Pacific and the North Atlantic oceans, including the Baltic Sea. Three species of Clupea are recognized. The main taxa, the Atlantic herring and the Pacific herring may each be divided into subspecies...
fishing industry. The fishing boats (locally known as "haringbuizen" ceased to use Vlaardingen in the years after World War II
World War II
World War II, or the Second World War , was a global conflict lasting from 1939 to 1945, involving most of the world's nations—including all of the great powers—eventually forming two opposing military alliances: the Allies and the Axis...
.

Seats in the city council after the municipal elections in 2010:

A Unilever
Unilever
Unilever is a British-Dutch multinational corporation that owns many of the world's consumer product brands in foods, beverages, cleaning agents and personal care products....
research centre is located in Vlaardingen. There are still some ship repair business(es) in east Vlaardingen beside the Nieuwe Maas
Nieuwe Maas
The Nieuwe Maas distributary of the Rhine River, and a former distributary of the Maas River, in the Dutch province of South Holland. It runs from the confluence of the rivers Noord and Lek, and flows west through Rotterdam. It ends west of the city where it meets the Oude Maas , near Vlaardingen,...
River. The Vulcaanhaven was for many years the largest privately owned artificial harbour in the world.

Some historical buildings in the centre of town are the Grote Kerk (Big Church), the Waag (Weighing Bridge) adjoining to the church and the old town hall (among other things used for weddings), all located on the Markt, the former marketplace, the Visbank (Fish Auction) at the harbour and the Oude Lijnbaan (Old Ropewalk
Ropewalk
A ropewalk is a long straight narrow lane, or a covered pathway, where long strands of material were laid before being twisted into rope.Ropewalks historically were harsh sweatshops, and frequently caught on fire, as hemp dust forms an explosive mixture. Rope was essential in sailing ships and the...
, where ropes were made). The Grote Kerk was probably established between 1156 and 1164 and has been expanded, damaged and rebuilt over the centuries. To the north of the old harbour is the old windmill (named Aeolus
Aeolus
Aeolus was the ruler of the winds in Greek mythology. In fact this name was shared by three mythic characters. These three personages are often difficult to tell apart, and even the ancient mythographers appear to have been perplexed about which Aeolus was which...
), which is still in operation and sells ground cereals. The harbour itself is used as a marina
Marina
A marina is a dock or basin with moorings and supplies for yachts and small boats.A marina differs from a port in that a marina does not handle large passenger ships or cargo from freighters....
and open air museum
Open air museum
An open-air museum is a distinct type of museum exhibiting its collections out-of-doors. The first open-air museums were established in Scandinavia towards the end of the nineteenth century, and the concept soon spread throughout Europe and North America. Open-air museums are variously known as...
with a collection of old ships. At the harbour is the Visserijmuseum (in 2003 the museum was renamed Visserij en Vlaardings Museum), a museum dedicated to commercial sea fishing and local lore.

People who are born in or (have) lived in Vlaardingen: