From a rural village in the early Middle Ages Delft developed to a city, that in the 13th century (1246) received its charter
City rights in the Netherlands
City rights are a medieval phenomenon in the history of the Low Countries. A liegelord, usually a count, duke or similar member of high nobility, granted a settlement he owned certain town privileges that settlements without city rights did not have....
.
(For some more information about the early developement, see the article "Gracht
Gracht
The word gracht is a Dutch term that is encountered by English-speaking people when confronted with Dutch art , Dutch history or tourism...
", section "Delft as an example").

After the Act of Abjuration was proclaimed in 1581 Delft became the de facto
De facto
De facto is a Latin expression that means "concerning fact." In law, it often means "in practice but not necessarily ordained by law" or "in practice or actuality, but not officially established." It is commonly used in contrast to de jure when referring to matters of law, governance, or...
capital
Capital City
Capital City was a television show produced by Euston Films which focused on the lives of investment bankers in London living and working on the corporate trading floor for the fictional international bank Shane-Longman....
of the newly independent Netherlands, as the seat of the Prince of Orange
Prince of Orange
Prince of Orange is a title of nobility, originally associated with the Principality of Orange, in what is now southern France. In French it is la Principauté d'Orange....
.

When William was shot dead in 1584, by Balthazar Gerards in the hall of the Prinsenhof, the family's traditional burial place in Breda was still in the hands of the Spanish. Therefore, he was buried in the Delft Nieuwe Kerk
Nieuwe Kerk (Delft)
Nieuwe Kerk is a landmark Protestant church in Delft, Netherlands. The building is located on Delft Market Square , opposite to the City Hall . In 1584, William the Silent was entombed here in a mausoleum designed by Hendrick and Pieter de Keyser. Since then members of the House of Orange-Nassau...
(New Church), starting a tradition for the House of Orange that has continued to the present day.

The Delft Explosion, also known in history as the Delft Thunderclap, occurred on 12 October 1654 when a gunpowder
Gunpowder
Gunpowder, also known since in the late 19th century as black powder, was the first chemical explosive and the only one known until the mid 1800s. It is a mixture of sulfur, charcoal, and potassium nitrate - with the sulfur and charcoal acting as fuels, while the saltpeter works as an oxidizer...
store exploded, destroying much of the city. Over a hundred people were killed and thousands wounded.

About 30 tonnes of gunpowder were stored in barrels in a magazine
Magazine (artillery)
Magazine is the name for an item or place within which ammunition is stored. It is taken from the Arabic word "makahazin" meaning "warehouse".-Ammunition storage areas:...
in a former Clarissen
Order of Poor Ladies
The Poor Clares also known as the Order of Saint Clare, the Order of Poor Ladies, the Poor Clare Sisters, the Clarisse, the Minoresses, the Franciscan Clarist Congregation, and the Second Order of St. Francis, , comprise several orders of nuns in the Catholic Church...
convent
Convent
A convent is either a community of priests, religious brothers, religious sisters, or nuns, or the building used by the community, particularly in the Roman Catholic Church and in the Anglican Communion...
in the Doelenkwartier district. Cornelis Soetens, the keeper of the magazine, opened the store to check a sample of the powder and a huge explosion followed. Luckily, many citizens were away, visiting a market
Market
A market is one of many varieties of systems, institutions, procedures, social relations and infrastructures whereby parties engage in exchange. While parties may exchange goods and services by barter, most markets rely on sellers offering their goods or services in exchange for money from buyers...
in Schiedam
Schiedam
Schiedam is a city and municipality in the province of South Holland in the Netherlands. It is part of the Rotterdam metropolitan area. The city is located west of Rotterdam, east of Vlaardingen and south of Delft...
or a fair
Fair
A fair or fayre is a gathering of people to display or trade produce or other goods, to parade or display animals and often to enjoy associated carnival or funfair entertainment. It is normally of the essence of a fair that it is temporary; some last only an afternoon while others may ten weeks. ...
in The Hague
The Hague
The Hague is the capital city of the province of South Holland in the Netherlands. With a population of 500,000 inhabitants , it is the third largest city of the Netherlands, after Amsterdam and Rotterdam...
. Artist Carel Fabritius
Carel Fabritius
Carel Fabritius was a Dutch painter and one of Rembrandt's most gifted pupils.-Biography:Fabritius was born in Beemster, the ten-year old polder, as the son of a schoolteacher. Initially he worked as a carpenter . In the early 1640s he studied at Rembrandt's studio in Amsterdam, along with his...
was wounded in the explosion and died of his injuries. Later on, Egbert van der Poel
Egbert van der Poel
Egbert van der Poel was a Dutch Golden Age genre and landscape painter, son of a Delft goldsmith.-Life:He may possibly have been a student of Esaias van de Velde and of Aert van der Neer. According to the RKD he was the brother of the painter Adriaen Lievensz van der Poel and a student of Cornelis...
painted several pictures of Delft showing the devastation. The Delft Explosion is the principal reason why Delft University of Technology
Delft University of Technology
Delft University of Technology , also known as TU Delft, is the largest and oldest Dutch public technical university, located in Delft, Netherlands...
maintains explosion science as a key topic within its research portfolio and graduate skill-set. 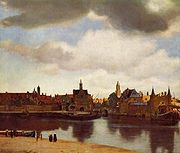 The city center retains a large number of monumental buildings, whereas in many streets there are canal
Canal
Canals are man-made channels for water. There are two types of canal:#Waterways: navigable transportation canals used for carrying ships and boats shipping goods and conveying people, further subdivided into two kinds:...
s of which the borders are connected by typical bridges, altogether making this city a notable tourist destination.

Delft is well known for the Delft pottery
Delftware
Delftware, or Delft pottery, denotes blue and white pottery made in and around Delft in the Netherlands and the tin-glazed pottery made in the Netherlands from the 16th century....
ceramic
Ceramic
A ceramic is an inorganic, nonmetallic solid prepared by the action of heat and subsequent cooling. Ceramic materials may have a crystalline or partly crystalline structure, or may be amorphous...
products which were styled on the imported Chinese
China
Chinese civilization may refer to:* China for more general discussion of the country.* Chinese culture* Greater China, the transnational community of ethnic Chinese.* History of China* Sinosphere, the area historically affected by Chinese culture...
porcelain
Porcelain
Porcelain is a ceramic material made by heating raw materials, generally including clay in the form of kaolin, in a kiln to temperatures between and...
of the 17th century. The city had an early start in this area since it was a home port of the Dutch East India Company
Dutch East India Company
The Dutch East India Company was a chartered company established in 1602, when the States-General of the Netherlands granted it a 21-year monopoly to carry out colonial activities in Asia...
.

The painter Johannes Vermeer
Johannes Vermeer
Johannes, Jan or Johan Vermeer was a Dutch painter who specialized in exquisite, domestic interior scenes of middle class life. Vermeer was a moderately successful provincial genre painter in his lifetime...
(1632–1675) was born in Delft. Vermeer used Delft streets and home interiors as the subject or background of his paintings.

Several other famous painters lived and worked in Delft at that time, such as Pieter de Hoogh
Pieter de Hooch
Pieter de Hooch was a genre painter during the Dutch Golden Age. He was a contemporary of Dutch Master Jan Vermeer, with whom his work shared themes and style.-Biography:...
, Carel Fabritius
Carel Fabritius
Carel Fabritius was a Dutch painter and one of Rembrandt's most gifted pupils.-Biography:Fabritius was born in Beemster, the ten-year old polder, as the son of a schoolteacher. Initially he worked as a carpenter . In the early 1640s he studied at Rembrandt's studio in Amsterdam, along with his...
, Nicolaes Maes
Nicolaes Maes
Nicolaes Maes, also known as Nicolaes Maas was a Dutch Golden Age painter of genre and portraits.-Biography:...
, Gerard Houckgeest and Hendrick Cornelisz. van Vliet. They all were members of the Delft School
Delft School (painting)
The Delft School is a category of mid-17th century Dutch Golden Age painting named after its main base, Delft. It is best known for genre painting: images of domestic life, views of households, church interiors, courtyards, squares and the streets of that city...
. The Delft School is known for its images of domestic life, views of households, church interiors, courtyards, squares and the streets of Delft. The painters also produced pictures showing historic events, flower paintings, portraits for patrons and the court, and decorative pieces of art.

East of Delft is the Delftse Hout ("Delft Wood"), a recreation area, with apart from a forest, through which bike-, horseride- and footpaths are leading, also a lake (suitable for swimming and windsurfing), narrow beaches, restaurant, community gardens, campground and other recreational and sports facilities. A small lakeside part is a nudist area, separated from other recreational grounds by a series of demarcation pegs on each side only.
There is a possibility to rent bikes at the station.

In the local economic field essential elements are:

Delft was the birthplace of these people:

Delft is twinned
Town twinning
Twin towns and sister cities are two of many terms used to describe the cooperative agreements between towns, cities, and even counties in geographically and politically distinct areas to promote cultural and commercial ties.- Terminology :...
with: