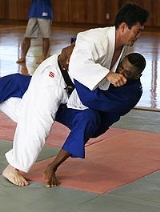 Overview
is a modern
Gendai Budo
, meaning "modern martial way", are modern Japanese martial arts which were established after the Meiji Restoration . Koryū are the opposite: ancient martial arts established before the Meiji Restoration.-Scope and tradition:...
martial art and combat sport
Combat sport
A Combat sport, also known as a Fighting sport, is a competitive contact sport where two combatants fight against each other using certain rules of engagement , typically with the aim of simulating parts of real hand to hand combat...
created in Japan
Japan
Japan is an island nation in East Asia. Located in the Pacific Ocean, it lies to the east of the Sea of Japan, China, North Korea, South Korea and Russia, stretching from the Sea of Okhotsk in the north to the East China Sea and Taiwan in the south...
in 1882 by Jigoro Kano. Its most prominent feature is its competitive element, where the object is to either throw
Throw (grappling)
A throw is a martial arts term for a grappling technique that involves off-balancing or lifting an opponent, and tossing them to the ground in Japanese martial arts referred to as nage-waza, 投げ技, "throwing technique"...
or takedown
Takedown (grappling)
A takedown is a martial arts and combat sports term for a technique that involves off-balancing an opponent and bringing him or her to the ground, typically with the combatant performing the takedown landing on top. The process of quickly advancing on an opponent and attempting a takedown is known...
one's opponent to the ground, immobilize or otherwise subdue one's opponent with a grappling maneuver, or force an opponent to submit by joint lock
Joint lock
A Joint lock is a grappling technique involving manipulation of an opponent's joints in such a way that the joints reach their maximal degree of motion....
ing or by executing a strangle hold or choke
Chokehold
A chokehold or choke is a general term for grappling hold that critically reduces or prevents either air or blood from passing through the neck of an opponent. The restriction may be of one or both and depends on the hold used and the reaction of the victim...
. Strikes
Strike (attack)
A strike is an attack with an inanimate object, such as a weapon, or with a part of the human body intended to cause an effect upon an opponent or to simply cause harm to an opponent. There are many different varieties of strikes...
and thrusts by hands and feet as well as weapons defences are a part of judo, but only in pre-arranged forms (kata
Kata
is a Japanese word describing detailed choreographed patterns of movements practised either solo or in pairs. The term form is used for the corresponding concept in non-Japanese martial arts in general....
) and are not allowed in judo competition or free practice (randori
Randori
is a term used in Japanese martial arts to describe free-style practice. The term literally means "chaos taking" or "grasping freedom," implying a freedom from the structured practice of kata. Randori may be contrasted with kata, as two potentially complementary types of training.The exact meaning...
).

The philosophy and subsequent pedagogy developed for judo became the model for other modern Japanese martial arts that developed from .

I have been told the IJF have changed things once again, by the way players are called up: White being called first then Blue So I asume White will b...