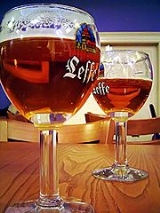 Overview
Beer is the world's most widely consumed and
probably oldest alcoholic beverage
Alcoholic beverage
An alcoholic beverage is a drink containing ethanol, commonly known as alcohol. Alcoholic beverages are divided into three general classes: beers, wines, and spirits. They are legally consumed in most countries, and over 100 countries have laws regulating their production, sale, and consumption...
; it is the third most popular drink overall, after water
Drinking water
Drinking water or potable water is water pure enough to be consumed or used with low risk of immediate or long term harm. In most developed countries, the water supplied to households, commerce and industry is all of drinking water standard, even though only a very small proportion is actually...
and tea
Tea
Tea is an aromatic beverage prepared by adding cured leaves of the Camellia sinensis plant to hot water. The term also refers to the plant itself. After water, tea is the most widely consumed beverage in the world...
. It is produced by the brewing
Brewing
Brewing is the production of beer through steeping a starch source in water and then fermenting with yeast. Brewing has taken place since around the 6th millennium BCE, and archeological evidence suggests that this technique was used in ancient Egypt...
and fermentation of sugar
Sugar
Sugar is a class of edible crystalline carbohydrates, mainly sucrose, lactose, and fructose, characterized by a sweet flavor.Sucrose in its refined form primarily comes from sugar cane and sugar beet...
s, mainly derived from malted cereal grains
Cereal
Cereals are grasses cultivated for the edible components of their grain , composed of the endosperm, germ, and bran...
, most commonly malt
Malt
Malt is germinated cereal grains that have been dried in a process known as "malting". The grains are made to germinate by soaking in water, and are then halted from germinating further by drying with hot air...
ed barley
Barley
Barley is a major cereal grain, a member of the grass family. It serves as a major animal fodder, as a base malt for beer and certain distilled beverages, and as a component of various health foods...
and malted wheat
Wheat
Wheat is a cereal grain, originally from the Levant region of the Near East, but now cultivated worldwide. In 2007 world production of wheat was 607 million tons, making it the third most-produced cereal after maize and rice...
. Sugars derived from maize (corn) and rice are widely used adjuncts
Adjuncts
Adjuncts are unmalted grains used in brewing beer which supplement the main mash ingredient , often with the intention of cutting costs, but sometimes to create an additional feature, such as better foam retention.- Definition :Ingredients which are standard for certain beers, such as wheat in a...
because of their lower cost. Most beer is flavoured with hops
Hops
Hops are the female flower clusters , of a hop species, Humulus lupulus. They are used primarily as a flavoring and stability agent in beer, to which they impart a bitter, tangy flavor, though hops are also used for various purposes in other beverages and herbal medicine...
, which add bitterness and act as a natural preservative
Preservative
A preservative is a naturally occurring or synthetically produced substance that is added to products such as foods, pharmaceuticals, paints, biological samples, wood, etc. to prevent decomposition by microbial growth or by undesirable chemical changes....
, though other flavourings such as herbs or fruit may occasionally be included.

Without question, the greatest invention in the history of mankind is beer. Oh, I grant you that the wheel was also a fine invention, but the wheel does not go nearly as well with pizza.

Sometimes when I reflect back on all the beer I drink I feel ashamed. Then I look into the glass and think about the workers in the brewery and all of their hopes and dreams. If I didn't drink this beer, they might be out of work and their dreams would be shattered. Then I say to myself, It is better that I drink this beer and let their dreams come true than be selfish and worry about my liver.

It is nice when you can sit back with some friends, drink some beer and have a good time.

You can't have a Real Country unless you have a BEER and an airline - it helps if you have some kind of a football team, or some nuclear weapons, but at the very least you need a BEER.

Beer is proof that God loves us and wants us to be happy.

Always remember that I have taken more out of alcohol than alcohol has taken out of me.

Beer, if drunk with moderation, softens the temper, cheers the spirit and promotes health.

Give me a woman who truly loves beer, and I will conquer the world.