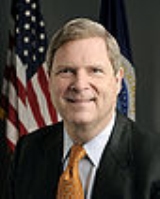 The line of succession for the Secretary of Agriculture is as follows:

The following is a list of Secretaries of Agriculture, since the creation of the office in 1889.
Parties