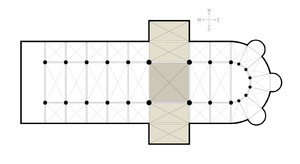 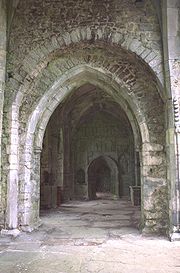 For the periodical go to The Transept.

A transept (with 2 semitransepts) is a transverse section, of any building, which lies across the main body of the building. In Christian churches, a transept is an area set crosswise to the nave
Nave
In Romanesque and Gothic Christian abbey, cathedral basilica and church architecture, the nave is the central approach to the high altar, the main body of the church. "Nave" was probably suggested by the keel shape of its vaulting...
in a cruciform
Cruciform
Cruciform means having the shape of a cross or Christian cross.- Cruciform architectural plan :This is a common description of Christian churches. In Early Christian, Byzantine and other Eastern Orthodox forms of church architecture this is more likely to mean a tetraconch plan, a Greek cross,...
("cross
Cross
A cross is a geometrical figure consisting of two lines or bars perpendicular to each other, dividing one or two of the lines in half. The lines usually run vertically and horizontally; if they run obliquely, the design is technically termed a saltire, although the arms of a saltire need not meet...
-shaped") building in Romanesque
Romanesque architecture
Romanesque architecture is an architectural style of Medieval Europe characterised by semi-circular arches. There is no consensus for the beginning date of the Romanesque architecture, with proposals ranging from the 6th to the 10th century. It developed in the 12th century into the Gothic style,...
and Gothic
Gothic architecture
Gothic architecture is a style of architecture that flourished during the high and late medieval period. It evolved from Romanesque architecture and was succeeded by Renaissance architecture....
Christian
Christian
A Christian is a person who adheres to Christianity, an Abrahamic, monotheistic religion based on the life and teachings of Jesus of Nazareth as recorded in the Canonical gospels and the letters of the New Testament...
church architecture
Architecture
Architecture is both the process and product of planning, designing and construction. Architectural works, in the material form of buildings, are often perceived as cultural and political symbols and as works of art...
. Each half of a transept is known as a semitransept.

The transept of a church separates the nave from the sanctuary
Sanctuary
A sanctuary is any place of safety. They may be categorized into human and non-human .- Religious sanctuary :A religious sanctuary can be a sacred place , or a consecrated area of a church or temple around its tabernacle or altar.- Sanctuary as a sacred place :#Sanctuary as a sacred place:#:In...
, whether apse
Apse
In architecture, the apse is a semicircular recess covered with a hemispherical vault or semi-dome...
, choir, chevet, presbytery
Presbytery (architecture)
The presbytery is the name for an area in a church building which is reserved for the clergy.In the oldest church it is separated by short walls, by small columns and pilasters in the Renaissance ones; it can also be raised, being reachable by a few steps, usually with railings....
or chancel
Chancel
In church architecture, the chancel is the space around the altar in the sanctuary at the liturgical east end of a traditional Christian church building...
. The transepts cross the nave at the crossing
Crossing (architecture)
A crossing, in ecclesiastical architecture, is the junction of the four arms of a cruciform church.In a typically oriented church , the crossing gives access to the nave on the west, the transept arms on the north and south, and the choir on the east.The crossing is sometimes surmounted by a tower...
, which belongs equally to the main nave axis and to the transept. Upon its four piers
Pier (architecture)
In architecture, a pier is an upright support for a superstructure, such as an arch or bridge. Sections of wall between openings function as piers. The simplest cross section of the pier is square, or rectangular, although other shapes are also common, such as the richly articulated piers of Donato...
, the crossing may support a spire
Spire
A spire is a tapering conical or pyramidal structure on the top of a building, particularly a church tower. Etymologically, the word is derived from the Old English word spir, meaning a sprout, shoot, or stalk of grass....
, a central tower
Tower
A tower is a tall structure, usually taller than it is wide, often by a significant margin. Towers are distinguished from masts by their lack of guy-wires....
(see Gloucester Cathedral
Gloucester Cathedral
Gloucester Cathedral, or the Cathedral Church of St Peter and the Holy and Indivisible Trinity, in Gloucester, England, stands in the north of the city near the river. It originated in 678 or 679 with the foundation of an abbey dedicated to Saint Peter .-Foundations:The foundations of the present...
) or a crossing dome
Dome
A dome is a structural element of architecture that resembles the hollow upper half of a sphere. Dome structures made of various materials have a long architectural lineage extending into prehistory....
. Since the altar
Altar
An altar is any structure upon which offerings such as sacrifices are made for religious purposes. Altars are usually found at shrines, and they can be located in temples, churches and other places of worship...
is usually located at the east end of a church, a transept extends to the north and south. The north and south end walls often hold decorated window
Window
A window is a transparent or translucent opening in a wall or door that allows the passage of light and, if not closed or sealed, air and sound. Windows are usually glazed or covered in some other transparent or translucent material like float glass. Windows are held in place by frames, which...
s of stained glass
Stained glass
The term stained glass can refer to coloured glass as a material or to works produced from it. Throughout its thousand-year history, the term has been applied almost exclusively to the windows of churches and other significant buildings...
, such as rose window
Rose window
A Rose window is often used as a generic term applied to a circular window, but is especially used for those found in churches of the Gothic architectural style and being divided into segments by stone mullions and tracery...
s, in stone tracery
Tracery
In architecture, Tracery is the stonework elements that support the glass in a Gothic window. The term probably derives from the 'tracing floors' on which the complex patterns of late Gothic windows were laid out.-Plate tracery:...
.

Occasionally, the basilica
Basilica
The Latin word basilica , was originally used to describe a Roman public building, usually located in the forum of a Roman town. Public basilicas began to appear in Hellenistic cities in the 2nd century BC.The term was also applied to buildings used for religious purposes...
s and the church and cathedral
Cathedral
A cathedral is a Christian church that contains the seat of a bishop...
planning that descended from them were built without transepts; sometimes the transepts were reduced to matched chapel
Chapel
A chapel is a building used by Christians as a place of fellowship and worship. It may be part of a larger structure or complex, such as a church, college, hospital, palace, prison or funeral home, located on board a military or commercial ship, or it may be an entirely free-standing building,...
s. More often, the transepts extended well beyond the sides of the rest of the building, forming the shape of a cross. This design is called a "Latin cross" ground plan, and these extensions are known as the arms of the transept. A "Greek cross" ground plan, with all four extensions the same length, produces a central-plan structure.

When churches have only one transept, as at Pershore Abbey
Pershore Abbey
Pershore Abbey, at Pershore in Worcestershire, was an Anglo-Saxon abbey and is now an Anglican parish church.-Foundation:The foundation of the minster at Pershore is alluded to in a spurious charter of King Æthelred of Mercia...
, there is generally a historical disaster, fire, war or funding problem, to explain the anomaly. At Beauvais only the chevet and transepts stand; the nave of the cathedral was never completed after a collapse of the daring high vaulting
Vault (architecture)
A Vault is an architectural term for an arched form used to provide a space with a ceiling or roof. The parts of a vault exert lateral thrust that require a counter resistance. When vaults are built underground, the ground gives all the resistance required...
in 1284. At St. Vitus Cathedral
St. Vitus Cathedral
Saint Vitus' Cathedral is as a Roman Catholic cathedral in Prague, and the seat of the Archbishop of Prague. The full name of the cathedral is St. Vitus, St. Wenceslas and St. Adalbert Cathedral...
, Prague
Prague
Prague is the capital and largest city of the Czech Republic. Situated in the north-west of the country on the Vltava river, the city is home to about 1.3 million people, while its metropolitan area is estimated to have a population of over 2.3 million...
, only the choir and part of a southern transept were completed until a renewed building campaign in the 19th century.


Other senses of the word

The word "transept" is occasionally extended to mean any subsidiary corridor crossing a larger main corridor, such as the cross-halls or "transepts" of The Crystal Palace
The Crystal Palace
The Crystal Palace was a cast-iron and glass building originally erected in Hyde Park, London, England, to house the Great Exhibition of 1851. More than 14,000 exhibitors from around the world gathered in the Palace's of exhibition space to display examples of the latest technology developed in...
, London, of glass and iron that was built for the Great Exhibition of 1851.

In a metro station
Metro station
A metro station or subway station is a railway station for a rapid transit system, often known by names such as "metro", "underground" and "subway". It is often underground or elevated. At crossings of metro lines, they are multi-level....
or similar construction, a transept is a space over the platforms
Railway platform
A railway platform is a section of pathway, alongside rail tracks at a train station, metro station or tram stop, at which passengers may board or alight from trains or trams. Almost all stations for rail transport have some form of platforms, with larger stations having multiple platforms...
and tracks
Rail tracks
The track on a railway or railroad, also known as the permanent way, is the structure consisting of the rails, fasteners, sleepers and ballast , plus the underlying subgrade...
of a station with side platforms, containing the bridge
Bridge
A bridge is a structure built to span physical obstacles such as a body of water, valley, or road, for the purpose of providing passage over the obstacle...
between the platforms. Placing the bridge in a transept rather than an enclosed tunnel
Tunnel
A tunnel is an underground passageway, completely enclosed except for openings for egress, commonly at each end.A tunnel may be for foot or vehicular road traffic, for rail traffic, or for a canal. Some tunnels are aqueducts to supply water for consumption or for hydroelectric stations or are sewers...
allows passengers to see the platforms, creating a less cramped feeling and making orientation easier.