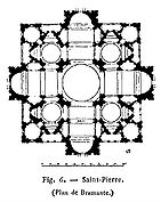 Encyclopedia
In architecture
Architecture
Architecture is both the process and product of planning, designing and construction. Architectural works, in the material form of buildings, are often perceived as cultural and political symbols and as works of art...
, a pier is an upright support for a superstructure
Superstructure
A superstructure is an upward extension of an existing structure above a baseline. This term is applied to various kinds of physical structures such as buildings, bridges, or ships...
, such as an arch
Arch
An arch is a structure that spans a space and supports a load. Arches appeared as early as the 2nd millennium BC in Mesopotamian brick architecture and their systematic use started with the Ancient Romans who were the first to apply the technique to a wide range of structures.-Technical aspects:The...
or bridge
Bridge
A bridge is a structure built to span physical obstacles such as a body of water, valley, or road, for the purpose of providing passage over the obstacle...
. Sections of wall between openings function as piers. The simplest cross section
Cross section (geometry)
In geometry, a cross-section is the intersection of a figure in 2-dimensional space with a line, or of a body in 3-dimensional space with a plane, etc...
of the pier is square
Square (geometry)
In geometry, a square is a regular quadrilateral. This means that it has four equal sides and four equal angles...
, or rectangular
Rectangle
In Euclidean plane geometry, a rectangle is any quadrilateral with four right angles. The term "oblong" is occasionally used to refer to a non-square rectangle...
, although other shapes are also common, such as the richly articulated piers of Donato Bramante
Donato Bramante
Donato Bramante was an Italian architect, who introduced the Early Renaissance style to Milan and the High Renaissance style to Rome, where his most famous design was St...
's original plan for St Peter's Basilica (illustration, right). In medieval architecture
Medieval architecture
Medieval architecture is a term used to represent various forms of architecture common in Medieval Europe.-Characteristics:-Religious architecture:...
, massive circular
Circle
A circle is a simple shape of Euclidean geometry consisting of those points in a plane that are a given distance from a given point, the centre. The distance between any of the points and the centre is called the radius....
supports called drum piers, cruciform
Cruciform
Cruciform means having the shape of a cross or Christian cross.- Cruciform architectural plan :This is a common description of Christian churches. In Early Christian, Byzantine and other Eastern Orthodox forms of church architecture this is more likely to mean a tetraconch plan, a Greek cross,...
(cross-shaped), and composite piers are common.

In buildings that are designed as a sequence of bays
Bay (architecture)
A bay is a unit of form in architecture. This unit is defined as the zone between the outer edges of an engaged column, pilaster, or post; or within a window frame, doorframe, or vertical 'bas relief' wall form.-Defining elements:...
, each window or door opening between piers is considered a single bay. In the Arc de Triomphe
Arc de Triomphe
-The design:The astylar design is by Jean Chalgrin , in the Neoclassical version of ancient Roman architecture . Major academic sculptors of France are represented in the sculpture of the Arc de Triomphe: Jean-Pierre Cortot; François Rude; Antoine Étex; James Pradier and Philippe Joseph Henri Lemaire...
, Paris (illustration, left) the central arch and side arches are raised on four massive planar piers.

In Bramante's plan for St Peter's Basilica, the shaped piers are rendered in solid black, the vaulting
Vault (architecture)
A Vault is an architectural term for an arched form used to provide a space with a ceiling or roof. The parts of a vault exert lateral thrust that require a counter resistance. When vaults are built underground, the ground gives all the resistance required...
they support in double lines, a familiar convention in representing architectural plan
Architectural plan
An architectural plan is a plan for architecture, and the documentation of written and graphic descriptions of the architectural elements of a building project including sketches, drawings and details.- Overview :...
s. Four piers support the weight of the dome
Dome
A dome is a structural element of architecture that resembles the hollow upper half of a sphere. Dome structures made of various materials have a long architectural lineage extending into prehistory....
at the central crossing; the piers of the four apse
Apse
In architecture, the apse is a semicircular recess covered with a hemispherical vault or semi-dome...
s that project from each outer wall are also strong, to withstand the outward thrust of the half-domes upon them. Many niche
Niche (architecture)
A niche in classical architecture is an exedra or an apse that has been reduced in size, retaining the half-dome heading usual for an apse. Nero's Domus Aurea was the first semi-private dwelling that possessed rooms that were given richly varied floor plans, shaped with niches and exedras;...
s articulate the wall-spaces of the piers. However these piers were found to be too small to support the weight and were changed later by Michelangelo
Michelangelo
Michelangelo di Lodovico Buonarroti Simoni , commonly known as Michelangelo, was an Italian Renaissance painter, sculptor, architect, poet, and engineer who exerted an unparalleled influence on the development of Western art...
to account for the massive weight of the dome.
The source of this article is wikipedia, the free encyclopedia.  The text of this article is licensed under the GFDL.