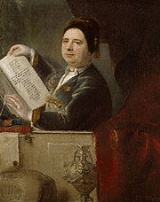 Cruciform means having the shape of a cross
Cross
A cross is a geometrical figure consisting of two lines or bars perpendicular to each other, dividing one or two of the lines in half. The lines usually run vertically and horizontally; if they run obliquely, the design is technically termed a saltire, although the arms of a saltire need not meet...
or Christian cross
Christian cross
The Christian cross, seen as a representation of the instrument of the crucifixion of Jesus Christ, is the best-known religious symbol of Christianity...
.

This is a common description of Christian
Christianity
Christianity is a monotheistic religion based on the life and teachings of Jesus as presented in canonical gospels and other New Testament writings...
churches. In Early Christian, Byzantine
Byzantine
Byzantine usually refers to the Roman Empire during the Middle Ages.Byzantine may also refer to:* A citizen of the Byzantine Empire, or native Greek during the Middle Ages...
and other Eastern Orthodox forms of church architecture
Church architecture
Church architecture refers to the architecture of buildings of Christian churches. It has evolved over the two thousand years of the Christian religion, partly by innovation and partly by imitating other architectural styles as well as responding to changing beliefs, practices and local traditions...
this is more likely to mean a tetraconch
Tetraconch
A tetraconch, from the Greek for "four shells", is a building, usually a church or other religious building, with four apses, one in each direction, usually of equal size. The basic ground plan of the building is therefore a Greek cross...
plan, a Greek cross, with arms of equal length or, later, a cross-in-square
Cross-in-square
The term cross-in-square or crossed-dome denotes the dominant architectural form of middle- and late-period Byzantine churches. The first cross-in-square churches were probably built in the late 8th century, and the form has remained in use throughout the Orthodox world until the present day...
plan, more like a square. In the Western churches it usually, though not exclusively, means a church built with the layout developed in Gothic architecture
Gothic architecture
Gothic architecture is a style of architecture that flourished during the high and late medieval period. It evolved from Romanesque architecture and was succeeded by Renaissance architecture....
comprising:


In churches that are not oriented with the altar at the geographical east end, it is usual to refer to the altar end as "liturgical east" and so forth.

Another example of ancient cruciform architecture can be found in Herod's temple, the second Jewish temple. 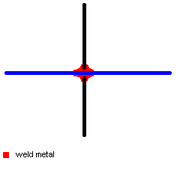 A cruciform joint is a specific joint in which 4 spaces are created by the welding of 3 plates of metal at right angles. 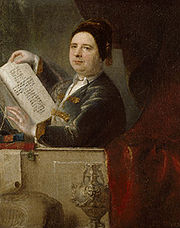 A cruciform manuscript was a form of Anglo-Saxon
Anglo-Saxon
Anglo-Saxon may refer to:* Anglo-Saxons, a group that invaded Britain** Old English, their language** Anglo-Saxon England, their history, one of various ships* White Anglo-Saxon Protestant, an ethnicity* Anglo-Saxon economy, modern macroeconomic term...
/ Insular
Insular art
Insular art, also known as Hiberno-Saxon art, is the style of art produced in the post-Roman history of Ireland and Great Britain. The term derives from insula, the Latin term for "island"; in this period Britain and Ireland shared a largely common style different from that of the rest of Europe...
manuscript written with the words in a block shaped like a cross.

In music, a melody
Melody
A melody , also tune, voice, or line, is a linear succession of musical tones which is perceived as a single entity...
of four pitches that ascends or descends by step
Steps and skips
In music, a step, or conjunct motion, is a linear or successive interval between two pitches which are consecutive scale degrees. Any larger interval is called a skip , or disjunct motion...
, skips below or above the first pitch, then returns to the first pitch by step. The red lines, one between the outer and one between the inner, in the example to the right demonstrate how this depicts a cross: since the second and third pitches must cross the path of the first and fourth. Often representative of the Christian cross, such melodies are cruciform in their retrogrades or inversions. Johann Sebastian Bach
Johann Sebastian Bach
Johann Sebastian Bach was a German composer, organist, harpsichordist, violist, and violinist whose sacred and secular works for choir, orchestra, and solo instruments drew together the strands of the Baroque period and brought it to its ultimate maturity...
, whose last name may be represented in tones through a musical cryptogram
Musical cryptogram
A musical cryptogram is a cryptogrammatic sequence of musical notes, a sequence which can be taken to refer to an extra-musical text by some 'logical' relationship, usually between note names and letters. The most common and best known examples result from composers using ciphered versions of their...
known as the BACH motif
BACH motif
In music, the BACH motif is the motif, a succession of notes important or characteristic to a piece, B flat, A, C, B natural. In German musical nomenclature, in which the note B natural is written as H and the B flat as B, it forms Johann Sebastian Bach's family name...
that is a cruciform melody, employed the device extensively. The subject of the fugue in c-sharp minor from The Well-Tempered Clavier
The Well-Tempered Clavier
The Well-Tempered Clavier , BWV 846–893, is a collection of solo keyboard music composed by Johann Sebastian Bach...
Book I is cruciform. See also: Cross motif
Cross motif
In music, the cross motif is a motif used by Franz Liszt to represent the Christian cross and taken from Gregorian melodies....
.

The plain sword used by knight
Knight
A knight was a member of a class of lower nobility in the High Middle Ages.By the Late Middle Ages, the rank had become associated with the ideals of chivalry, a code of conduct for the perfect courtly Christian warrior....
s, distinctive due to the flat bar used as a guard
Crossguard
On a sword or some knives, the crossguard , also known as quillons, is a bar of metal at right angles to the blade, placed between the blade and the hilt. The crossguard stops the wielder from punching shields while swinging the weapon, thereby protecting the user's hand...
. The overall shape of the sword when held point down is that of a cross. It is believed this shape was encouraged by the church to remind Knights of their religion. It was however very popular due to the protection it offered to the hand and certain attacks that rely on the cross to trap the blade of the enemy. See Sword. 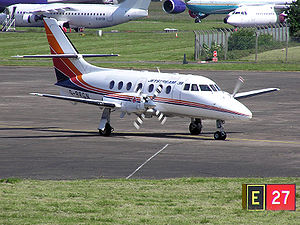 Some airplanes use a cruciform tail design, wherein the horizontal stabilizer
Stabilizer (aircraft)
In aviation, a stabilizer provides stability when the aircraft is flying straight, and the airfoil of the horizontal stabilizer balances the forces acting on the aircraft....
is positioned mid-way up the vertical stabilizer, forming a cruciform shape when viewed from the front or rear. Some examples are the F-9 Cougar,the F-10 Skyknight and the Sud Aviation Caravelle
Sud Aviation Caravelle
The Sud Aviation SE 210 Caravelle was the first short/medium-range jet airliner produced by the French Sud Aviation firm starting in 1955 . The Caravelle was one of the more successful European first generation jetliners, selling throughout Europe and even penetrating the United States market, with...

Cruciform web designs use a cross-shaped web page
Web page
A web page or webpage is a document or information resource that is suitable for the World Wide Web and can be accessed through a web browser and displayed on a monitor or mobile device. This information is usually in HTML or XHTML format, and may provide navigation to other web pages via hypertext...
that expands to fill the width and height of the web browser
Web browser
A web browser is a software application for retrieving, presenting, and traversing information resources on the World Wide Web. An information resource is identified by a Uniform Resource Identifier and may be a web page, image, video, or other piece of content...
window. There are a number of different approaches to implementing them.


Doctor Who: The Cruciform