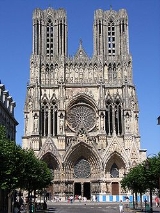 Originating in 12th century France and lasting into the 16th century, Gothic architecture was known during the period as "the French Style," (), with the term Gothic first appearing during the latter part of the Renaissance
Renaissance
The Renaissance was a cultural movement that spanned roughly the 14th to the 17th century, beginning in Italy in the Late Middle Ages and later spreading to the rest of Europe. The term is also used more loosely to refer to the historical era, but since the changes of the Renaissance were not...
. Its characteristic features include the pointed arch
Ogive
An ogive is the roundly tapered end of a two-dimensional or three-dimensional object.-Applied physical science and engineering:In ballistics or aerodynamics, an ogive is a pointed, curved surface mainly used to form the approximately streamlined nose of a bullet or other projectile.The traditional...
, the ribbed vault and the flying buttress
Flying buttress
A flying buttress is a specific form of buttressing most strongly associated with Gothic church architecture. The purpose of any buttress is to resist the lateral forces pushing a wall outwards by redirecting them to the ground...
.

Gothic architecture is most familiar as the architecture of many of the great cathedral
Cathedral
A cathedral is a Christian church that contains the seat of a bishop...
s, abbey
Abbey
An abbey is a Catholic monastery or convent, under the authority of an Abbot or an Abbess, who serves as the spiritual father or mother of the community.The term can also refer to an establishment which has long ceased to function as an abbey,...
s and churches of Europe.

I want to get the complete plane of profit,s mosq

Where in a Romanesque or Gothic Church are the chorus maior & chorus minor?
More

Is there such a gothic cathedral in europe that has no ceiling at all?