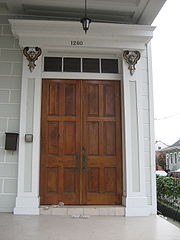 In early Gothic ecclesiastical work, transoms are only found in belfry unglazed windows or spire
Spire
A spire is a tapering conical or pyramidal structure on the top of a building, particularly a church tower. Etymologically, the word is derived from the Old English word spir, meaning a sprout, shoot, or stalk of grass....
lights, where they were deemed necessary to strengthen the mullion
Mullion
A mullion is a vertical structural element which divides adjacent window units. The primary purpose of the mullion is as a structural support to an arch or lintel above the window opening. Its secondary purpose may be as a rigid support to the glazing of the window...
s in the absence of the iron
Iron
Iron is a chemical element with the symbol Fe and atomic number 26. It is a metal in the first transition series. It is the most common element forming the planet Earth as a whole, forming much of Earth's outer and inner core. It is the fourth most common element in the Earth's crust...
stay bars, which in glazed windows served a similar purpose. In the later Gothic, and more especially the Perpendicular Period, the introduction of transoms became common in windows of all kinds.

Transom windows which could be opened to provide cross-ventilation while maintaining security and privacy (due to their small size and height above floor level) were a common feature of office buildings and apartments before air conditioning became common.

Architectural details called are often found above doors in traditional Japanese houses and buildings. These details can be anything from simple shōji
Shoji
In traditional Japanese architecture, a shōji is a door, window or room divider consisting of translucent paper over a frame of wood which holds together a lattice of wood or bamboo...
-style dividers to elaborate wooden carvings.