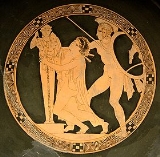 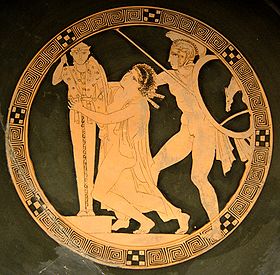 A sanctuary is any place of safety. They may be categorized into human and non-human (plants and animals).

A religious sanctuary can be a sacred place (such as such as a church, temple
Temple
A temple is a structure reserved for religious or spiritual activities, such as prayer and sacrifice, or analogous rites. A templum constituted a sacred precinct as defined by a priest, or augur. It has the same root as the word "template," a plan in preparation of the building that was marked out...
, or mosque
Mosque
A mosque is a place of worship for followers of Islam. The word is likely to have entered the English language through French , from Portuguese , from Spanish , and from Berber , ultimately originating in — . The Arabic word masjid literally means a place of prostration...
), or a consecrated area of a church or temple around its tabernacle or altar
Altar
An altar is any structure upon which offerings such as sacrifices are made for religious purposes. Altars are usually found at shrines, and they can be located in temples, churches and other places of worship...
.


Sanctuary as a sacred place

When referring to prosecution of crimes, sanctuary can mean one of the following:

When referring to a shelter from danger or hardship, sanctuary can mean one of the following:

These sites included university campuses and cities. From the 1980s continuing into the 2000s, there also have been instances of churches providing "sanctuary" for short periods to migrants facing deportation in Germany, France, Belgium, the Netherlands, Norway, Switzerland, Australia, the United States, and Canada, among other nations. In 2007, Iranian refugee Shahla Valadi was granted asylum in Norway after spending seven years in church sanctuary after the initial denial of asylum. Norwegian authorities will not, as a rule, enter churches to deport illegal immigrants. From 1983 to 2003 Canada experienced 36 sanctuary incidents. The "New Sanctuary Movement" organization estimates that at least 600,000 people in the United States have at least one family member in danger of deportation.

An animal sanctuary is a facility where animals are brought to live and be protected for the rest of their lives.[1] Unlike animal shelters, sanctuaries do not seek to place animals with individuals or groups, instead maintaining each animal until his or her natural death.

Plant sanctuaries are areas set aside to maintain functioning natural ecosystems, to act as refuges for species and to maintain ecological processes that cannot survive in most intensely managed landscapes and seascapes. Protected areas act as benchmarks against which we understand human interactions with the natural world. Today they are often the only hope we have of stopping many threatened or endemic species from becoming extinct.