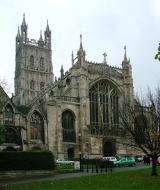 Encyclopedia
Gloucester Cathedral, or the Cathedral Church of St Peter and the Holy and Indivisible Trinity, in Gloucester
Gloucester
Gloucester is a city, district and county town of Gloucestershire in the South West region of England. Gloucester lies close to the Welsh border, and on the River Severn, approximately north-east of Bristol, and south-southwest of Birmingham....
, England
England
England is a country that is part of the United Kingdom. It shares land borders with Scotland to the north and Wales to the west; the Irish Sea is to the north west, the Celtic Sea to the south west, with the North Sea to the east and the English Channel to the south separating it from continental...
, stands in the north of the city near the river. It originated in 678 or 679 with the foundation of an abbey dedicated to Saint Peter
Saint Peter
Saint Peter or Simon Peter was an early Christian leader, who is featured prominently in the New Testament Gospels and the Acts of the Apostles. The son of John or of Jonah and from the village of Bethsaida in the province of Galilee, his brother Andrew was also an apostle...
(dissolved
Dissolution of the Monasteries
The Dissolution of the Monasteries, sometimes referred to as the Suppression of the Monasteries, was the set of administrative and legal processes between 1536 and 1541 by which Henry VIII disbanded monasteries, priories, convents and friaries in England, Wales and Ireland; appropriated their...
by King Henry VIII
Henry VIII of England
Henry VIII was King of England from 21 April 1509 until his death. He was Lord, and later King, of Ireland, as well as continuing the nominal claim by the English monarchs to the Kingdom of France...
).

The foundations of the present church were laid by Abbot Serlo (1072–1104). Walter Gloucester (d. 1412) the abbey's historian, became its first mitred abbot in 1381. Until 1541, Gloucester lay in the see of Worcester, but the separate see was then constituted, with John Wakeman
John Wakeman
John Wakeman was an English Benedictine, the last Abbot of Tewkesbury and first Bishop of Gloucester, both posts in the English county of Gloucestershire. In the earlier part of his life he went by the name John Wiche.-Life:...
, last abbot of Tewkesbury
Tewkesbury Abbey
The Abbey of the Blessed Virgin Mary at Tewkesbury in the English county of Gloucestershire is the second largest parish church in the country and a former Benedictine monastery.-History:...
, as its first bishop. The diocese covers the greater part of Gloucestershire
Gloucestershire
Gloucestershire is a county in South West England. The county comprises part of the Cotswold Hills, part of the flat fertile valley of the River Severn, and the entire Forest of Dean....
, with small parts of Herefordshire
Herefordshire
Herefordshire is a historic and ceremonial county in the West Midlands region of England. For Eurostat purposes it is a NUTS 3 region and is one of three counties that comprise the "Herefordshire, Worcestershire and Gloucestershire" NUTS 2 region. It also forms a unitary district known as the...
and Wiltshire
Wiltshire
Wiltshire is a ceremonial county in South West England. It is landlocked and borders the counties of Dorset, Somerset, Hampshire, Gloucestershire, Oxfordshire and Berkshire. It contains the unitary authority of Swindon and covers...
. The cathedral has a stained glass window containing the earliest images of golf
Golf
Golf is a precision club and ball sport, in which competing players use many types of clubs to hit balls into a series of holes on a golf course using the fewest number of strokes....
. This dates from 1350, over 300 years earlier than the earliest image of golf from Scotland. There is also a carved image of people playing a ball game, believed by some to be one of the earliest images of medieval football
Football
Football may refer to one of a number of team sports which all involve, to varying degrees, kicking a ball with the foot to score a goal. The most popular of these sports worldwide is association football, more commonly known as just "football" or "soccer"...
.

The cathedral, built as the abbey church, consists of a Norman
Norman architecture
About|Romanesque architecture, primarily English|other buildings in Normandy|Architecture of Normandy.File:Durham Cathedral. Nave by James Valentine c.1890.jpg|thumb|200px|The nave of Durham Cathedral demonstrates the characteristic round arched style, though use of shallow pointed arches above the...
nucleus (Walter de Lacy
De Lacy
de Lacy is the surname of an old Norman noble family originating from Lassy . The first records are about Hugh de Lacy . Descendent of Hugh de Lacy left Normandy and travelled to England along with William the Conqueror. Walter and Ilbert de Lacy fought in the battle of Hastings...
is buried there), with additions in every style of Gothic architecture
Gothic architecture
Gothic architecture is a style of architecture that flourished during the high and late medieval period. It evolved from Romanesque architecture and was succeeded by Renaissance architecture....
. It is 420 feet (128 m) long, and 144 feet (43.9 m) wide, with a fine central tower of the 15th century rising to the height of 225 ft (68.6 m) and topped by four delicate pinnacle
Pinnacle
A pinnacle is an architectural ornament originally forming the cap or crown of a buttress or small turret, but afterwards used on parapets at the corners of towers and in many other situations. The pinnacle looks like a small spire...
s, a famous landmark. The nave is massive Norman with an Early English roof; the crypt
Crypt
In architecture, a crypt is a stone chamber or vault beneath the floor of a burial vault possibly containing sarcophagi, coffins or relics....
, under the choir, aisles and chapels, is Norman, as is the chapter house
Chapter house
A chapter house or chapterhouse is a building or room attached to a cathedral or collegiate church in which meetings are held. They can also be found in medieval monasteries....
. The crypt is one of the four apsidal cathedral crypts in England, the others being at Worcester
Worcester Cathedral
Worcester Cathedral is an Anglican cathedral in Worcester, England; situated on a bank overlooking the River Severn. It is the seat of the Anglican Bishop of Worcester. Its official name is The Cathedral Church of Christ and the Blessed Mary the Virgin of Worcester...
, Winchester
Winchester Cathedral
Winchester Cathedral at Winchester in Hampshire is one of the largest cathedrals in England, with the longest nave and overall length of any Gothic cathedral in Europe...
and Canterbury
Canterbury Cathedral
Canterbury Cathedral in Canterbury, Kent, is one of the oldest and most famous Christian structures in England and forms part of a World Heritage Site....
.

The most notable monument is the canopied shrine of King Edward II of England
Edward II of England
Edward II , called Edward of Caernarfon, was King of England from 1307 until he was deposed by his wife Isabella in January 1327. He was the sixth Plantagenet king, in a line that began with the reign of Henry II...
who was murdered at nearby Berkeley Castle
Berkeley Castle
Berkeley Castle is a castle in the town of Berkeley, Gloucestershire, UK . The castle's origins date back to the 11th century and it has been designated by English Heritage as a grade I listed building.The castle has remained within the Berkeley family since they reconstructed it in the...
(illustration below). The building and sanctuary were enriched by the visits of pilgrims to this shrine. In a side-chapel is a monument in coloured bog oak
Bog oak
Bog-wood, also known as morta is wood from trees that have been buried in peat bogs and preserved from decay by the acidic and anaerobic bog conditions, sometimes for hundreds or even thousands of years. The wood is usually stained brown by tannins dissolved in the acidic water...
of Robert Curthose, eldest son of William the Conqueror and a great benefactor of the abbey, who was interred there. Monuments of Bishop Warburton and Dr Edward Jenner
Edward Jenner
Edward Anthony Jenner was an English scientist who studied his natural surroundings in Berkeley, Gloucestershire...
are also worthy of note.

The cathedral has forty-six 14th-century misericord
Misericord
A misericord is a small wooden shelf on the underside of a folding seat in a church, installed to provide a degree of comfort for a person who has to stand during long periods of prayer.-Origins:...
s and twelve 19th-century replacements by George Gilbert Scott. Both types have a wide range of subject matter: mythology, everyday occurrences, religious symbolism and folklore.

Details of the organ from the National Pipe Organ Register

The known organists of the cathedral are listed below. In modern times, the most senior post has become known as Director of Music; only these names are recorded here.

The cathedral has been used from 2000 as a location for filming the first, second and sixth Harry Potter
Harry Potter
Harry Potter is a series of seven fantasy novels written by the British author J. K. Rowling. The books chronicle the adventures of the adolescent wizard Harry Potter and his best friends Ron Weasley and Hermione Granger, all of whom are students at Hogwarts School of Witchcraft and Wizardry...
films, which has generated revenue and publicity, but caused some controversy amongst those who suggest that the theme of the films was unsuitable for a church.

In 2008 the Cathedral was used by BBC Wales
BBC Wales
BBC Cymru Wales is a division of the British Broadcasting Corporation for Wales. Based at Broadcasting House in the Llandaff area of Cardiff, it directly employs over 1200 people, and produces a broad range of television, radio and online services in both the Welsh and English languages.Outside...
as a location for the Doctor Who
Doctor Who
Doctor Who is a British science fiction television programme produced by the BBC. The programme depicts the adventures of a time-travelling humanoid alien known as the Doctor who explores the universe in a sentient time machine called the TARDIS that flies through time and space, whose exterior...
Christmas Special.


University of the West of England

The cathedral is also used during school term-time as the venue for regular school assemblies, known as morning chapel by The King's School, Gloucester
The King's School, Gloucester
The King's School, Gloucester is an independent school in the United Kingdom, taking students from the ages of 3-18, with around 500 students. The current Headmaster is Alastair Macnaughton.- Origins :...
which is deeply historically and physically connected to the cathedral, and for events by the High School for Girls
High School for Girls
The High School for Girls is a grammar school on Denmark Road, Gloucester. It is one of only three girls' grammar schools in Gloucestershire, and consistently ranks in league tables as one of the best schools in England and one of the Top 50 Selective Schools in the UK.-Admission:As a grammar...
(Denmark Road, Gloucester), the Crypt Grammar School for boys and Ribston Hall High School
Ribston Hall High School
Ribston Hall High School is a grammar school in Gloucester, England, for girls between the ages of 11-18. It was founded in the year of 1921, the first head girl was Hilda Smith.-Admissions:It also has a sixth form for both girls and boys...
.