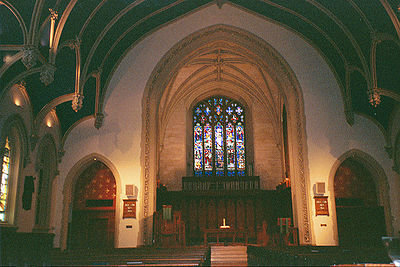 In church architecture
Church architecture
Church architecture refers to the architecture of buildings of Christian churches. It has evolved over the two thousand years of the Christian religion, partly by innovation and partly by imitating other architectural styles as well as responding to changing beliefs, practices and local traditions...
, the chancel is the space around the altar
Altar
An altar is any structure upon which offerings such as sacrifices are made for religious purposes. Altars are usually found at shrines, and they can be located in temples, churches and other places of worship...
in the sanctuary
Sanctuary
A sanctuary is any place of safety. They may be categorized into human and non-human .- Religious sanctuary :A religious sanctuary can be a sacred place , or a consecrated area of a church or temple around its tabernacle or altar.- Sanctuary as a sacred place :#Sanctuary as a sacred place:#:In...
at the liturgical east end of a traditional Christian church building. It may terminate in an apse
Apse
In architecture, the apse is a semicircular recess covered with a hemispherical vault or semi-dome...
.

Following the exposition of the doctrine of transubstantiation
Transubstantiation
In Roman Catholic theology, transubstantiation means the change, in the Eucharist, of the substance of wheat bread and grape wine into the substance of the Body and Blood, respectively, of Jesus, while all that is accessible to the senses remains as before.The Eastern Orthodox...
at the fourth Lateran Council
Lateran council
The Lateran councils were ecclesiastical councils or synods of the Catholic Church held at Rome in the Lateran Palace next to the Lateran Basilica. Ranking as a papal cathedral, this became a much-favored place of assembly for ecclesiastical councils both in antiquity and more especially during...
of 1215, clergy were required to ensure that the blessed sacrament
Eucharist
The Eucharist , also called Holy Communion, the Sacrament of the Altar, the Blessed Sacrament, the Lord's Supper, and other names, is a Christian sacrament or ordinance...
was to be kept protected from irreverent access or abuse; and accordingly the area of the church used by the lay congregation was to be screened off from that used by the clergy. This distinction was enforced by the development of canon law
Canon law
Canon law is the body of laws & regulations made or adopted by ecclesiastical authority, for the government of the Christian organization and its members. It is the internal ecclesiastical law governing the Catholic Church , the Eastern and Oriental Orthodox churches, and the Anglican Communion of...
, by which the construction and upkeep of the chancel was the responsibility of the rector
Rector
The word rector has a number of different meanings; it is widely used to refer to an academic, religious or political administrator...
, whereas the construction and upkeep of the nave was the responsibility of the parish
Parish
A parish is a territorial unit historically under the pastoral care and clerical jurisdiction of one parish priest, who might be assisted in his pastoral duties by a curate or curates - also priests but not the parish priest - from a more or less central parish church with its associated organization...
.

As well as the altar, the chancel usually houses the credence table
Credence table
A Credence table is a small side table in the sanctuary of a Christian church which is used in the celebration of the Eucharist. Etymology: from latin credens, -entis, believer)....
, and seats for officiating and assisting ministers. In Anglican and Methodist churches it will usually include the choir. In some traditions, the pulpit
Pulpit
Pulpit is a speakers' stand in a church. In many Christian churches, there are two speakers' stands at the front of the church. Typically, the one on the left is called the pulpit...
and lectern
Lectern
A lectern is a reading desk with a slanted top, usually placed on a stand or affixed to some other form of support, on which documents or books are placed as support for reading aloud, as in a scripture reading, lecture, or sermon...
may be in the chancel, but in others these functions are considered proper to the nave
Nave
In Romanesque and Gothic Christian abbey, cathedral basilica and church architecture, the nave is the central approach to the high altar, the main body of the church. "Nave" was probably suggested by the keel shape of its vaulting...
.

The chancel is typically raised somewhat above the level of the nave, where the congregation gathers. It may be separated from the nave
Nave
In Romanesque and Gothic Christian abbey, cathedral basilica and church architecture, the nave is the central approach to the high altar, the main body of the church. "Nave" was probably suggested by the keel shape of its vaulting...
by a rood screen
Rood screen
The rood screen is a common feature in late medieval church architecture. It is typically an ornate partition between the chancel and nave, of more or less open tracery constructed of wood, stone, or wrought iron...
, a rail, or an open space. In some churches, the congregation may gather on three sides or in a semicircle around the chancel.

The word "chancel" derives from the French usage of chancel from a Late Latin
Late Latin
Late Latin is the scholarly name for the written Latin of Late Antiquity. The English dictionary definition of Late Latin dates this period from the 3rd to the 6th centuries AD extending in Spain to the 7th. This somewhat ambiguously defined period fits between Classical Latin and Medieval Latin...
word cancelli meaning "lattice". This refers to the typical form of rood screens.