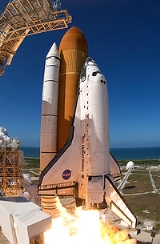 The spacecraft takes its name from four British ships of exploration named Discovery, primarily HMS Discovery
HMS Discovery (1774)
HMS Discovery was the consort ship of James Cook's third expedition to the Pacific Ocean in 1776 - 1780. Like Cook's other ships, Discovery was a Whitby-built collier of 298 tons, originally named Diligence when she was built in 1774. Originally a brig, Cook had her changed to a full rigged ship...
, one of the ships commanded by Captain James Cook
James Cook
Captain James Cook, FRS, RN was a British explorer, navigator and cartographer who ultimately rose to the rank of captain in the Royal Navy...
during his third and final major voyage from 1776 to 1779.

Discovery was the shuttle that launched the Hubble Space Telescope
Hubble Space Telescope
The Hubble Space Telescope is a space telescope that was carried into orbit by a Space Shuttle in 1990 and remains in operation. A 2.4 meter aperture telescope in low Earth orbit, Hubble's four main instruments observe in the near ultraviolet, visible, and near infrared...
. The second
STS-82
STS-82 was a Hubble Space Telescope servicing mission by Space Shuttle Discovery. The mission launched from Kennedy Space Center, Florida, on 11 February 1997 and returned to earth on 21 February 1997 at Kennedy Space Center.-Crew:...
and third
STS-103
STS-103 was a Hubble Space Telescope servicing mission by Space Shuttle Discovery. The mission launched from Kennedy Space Center, Florida, on 19 December 1999 and returned on 27 December 1999.-Crew:-Mission parameters:*Mass:...
Hubble service missions were also conducted by Discovery. It has also launched the Ulysses probe
Ulysses probe
Ulysses is a decommissioned robotic space probe that was designed to study the Sun as a joint venture of NASA and the European Space Agency . The spacecraft was originally named Odysseus, because of its lengthy and indirect trajectory to near Solar distance...
and three TDRS
TDRS
A Tracking and Data Relay Satellite is a type of communications satellite that forms part of the Tracking and Data Relay Satellite System used by NASA and other United States government agencies for communications to and from independent "User Platforms" such as satellites, balloons, aircraft,...
satellites. Discovery has been chosen twice as the "Return To Flight" Orbiter, first in 1988 after the 1986 Challenger disaster
STS-51-L
STS-51-L was the twenty-fifth flight of the American Space Shuttle program, which marked the first time an ordinary civilian, schoolteacher Christa McAuliffe, had flown aboard the Space Shuttle. The mission used Space Shuttle Challenger, which lifted off from the Launch Complex 39-B on 28 January...
, and then for the twin "Return To Flight" missions in July 2005 and July 2006 after the 2003 Columbia disaster
Space Shuttle Columbia disaster
The Space Shuttle Columbia disaster occurred on February 1, 2003, when shortly before it was scheduled to conclude its 28th mission, STS-107, the Space Shuttle Columbia disintegrated over Texas and Louisiana during re-entry into the Earth's atmosphere, resulting in the death of all seven crew members...
. Discovery also carried Project Mercury
Project Mercury
In January 1960 NASA awarded Western Electric Company a contract for the Mercury tracking network. The value of the contract was over $33 million. Also in January, McDonnell delivered the first production-type Mercury spacecraft, less than a year after award of the formal contract. On February 12,...
astronaut John Glenn
John Glenn
John Herschel Glenn, Jr. is a former United States Marine Corps pilot, astronaut, and United States senator who was the first American to orbit the Earth and the third American in space. Glenn was a Marine Corps fighter pilot before joining NASA's Mercury program as a member of NASA's original...
, who was 77 at the time, back into space during STS-95
STS-95
STS-95 was a Space Shuttle Discovery mission launched from Kennedy Space Center, Florida on 29 October 1998. It was the 25th flight of Discovery and the 92nd mission flown since the start of the Space Shuttle program in April 1981. It was a highly publicized mission due to former Project Mercury...
on October 29, 1998, making him the oldest person to go into space.

Had the planned STS-62-A
STS-62-A
STS-62-A was a planned Space Shuttle mission to deliver a reconnaissance payload into polar orbit. It was expected to use Discovery. It would have been the first manned launch from Vandenberg Air Force Base, California...
mission from Vandenberg Air Force Base
Vandenberg Air Force Base
Vandenberg Air Force Base is a United States Air Force Base, located approximately northwest of Lompoc, California. It is under the jurisdiction of the 30th Space Wing, Air Force Space Command ....
in 1986 for the United States Department of Defense
United States Department of Defense
The United States Department of Defense is the U.S...
gone ahead, Discovery would have flown it. Its final mission, STS-133, landed on March 9, 2011, in Kennedy Space Center, Florida. After decommissioning and delivery, the spacecraft will be displayed in Virginia at the Steven F. Udvar-Hazy Center
Steven F. Udvar-Hazy Center
The Steven F. Udvar-Hazy Center is the Smithsonian National Air and Space Museum 's annex at Washington Dulles International Airport in the Chantilly area of Fairfax County, Virginia, United States....
, an annex of the Smithsonian Institution
Smithsonian Institution
The Smithsonian Institution is an educational and research institute and associated museum complex, administered and funded by the government of the United States and by funds from its endowment, contributions, and profits from its retail operations, concessions, licensing activities, and magazines...
's National Air and Space Museum
National Air and Space Museum
The National Air and Space Museum of the Smithsonian Institution holds the largest collection of historic aircraft and spacecraft in the world. It was established in 1976. Located in Washington, D.C., United States, it is a center for research into the history and science of aviation and...
.

Discovery weighed some 6870 pounds (3,116.2 kg) less than Columbia when it was brought into service due to optimizations determined during the construction and testing of Enterprise, Columbia and Challenger.

Beginning in late 1995, the orbiter underwent a nine-month Orbiter Maintenance Down Period (OMDP) in Palmdale California. This included outfitting the vehicle with a 5th set of cryogenic tanks and an external airlock to support missions to the International Space Station. It can be attached to the top of specialized aircraft and did so in June 1996 when it returned to the Kennedy Space Center, riding piggy-back
Piggy-back
Piggy-backed is riding on the back of something else. To piggy-back is to ride on someone's back or shoulders or head.-Etymology:...
on a modified Boeing 747
Boeing 747
The Boeing 747 is a wide-body commercial airliner and cargo transport, often referred to by its original nickname, Jumbo Jet, or Queen of the Skies. It is among the world's most recognizable aircraft, and was the first wide-body ever produced...
.

After STS-105
STS-105
STS-105 was a mission of the Space Shuttle Discovery to the International Space Station, launched from Kennedy Space Center, Florida, 10 August 2001. This mission was Discoverys final mission until STS-114, because Discovery was grounded for a refit, and then all Shuttles were grounded in the wake...
, Discovery became the first of the orbiter fleet to undergo Orbiter Major Modification (OMM) period at the Kennedy Space Center. Work began in September 2002 to prepare the vehicle for Return to Flight. This included scheduled upgrades and additional safety modifications. Discovery is 6 pounds (2.7 kg) heavier than Atlantis
Space Shuttle Atlantis
The Space Shuttle Atlantis is a retired Space Shuttle orbiter in the Space Shuttle fleet belonging to the National Aeronautics and Space Administration , the spaceflight and space exploration agency of the United States...
and 363 pounds (164.7 kg) heavier than Endeavour
Space Shuttle Endeavour
Space Shuttle Endeavour is one of the retired orbiters of the Space Shuttle program of NASA, the space agency of the United States. Endeavour was the fifth and final spaceworthy NASA space shuttle to be built, constructed as a replacement for Challenger...
.

Discovery was decommissioned
Ship decommissioning
To decommission a ship is to terminate her career in service in the armed forces of her nation. A somber occasion, it has little of the elaborate ceremony of ship commissioning, but carries significant tradition....
on March 9, 2011.

By its last mission, Discovery had flown 148 million miles (238 million km) in 39 missions, completed 5,830 orbits, and spent 365 days in orbit in over 27 years. Discovery is the Orbiter Fleet leader, having flown more flights than any other Orbiter Shuttle in the fleet, including four in 1985 alone. Discovery flew all three "return to flight" missions after the Challenger
Space Shuttle Challenger disaster
The Space Shuttle Challenger disaster occurred on January 28, 1986, when Space Shuttle Challenger broke apart 73 seconds into its flight, leading to the deaths of its seven crew members. The spacecraft disintegrated over the Atlantic Ocean, off the coast of central Florida at 11:38 am EST...
and Columbia
Space Shuttle Columbia disaster
The Space Shuttle Columbia disaster occurred on February 1, 2003, when shortly before it was scheduled to conclude its 28th mission, STS-107, the Space Shuttle Columbia disintegrated over Texas and Louisiana during re-entry into the Earth's atmosphere, resulting in the death of all seven crew members...
disasters: STS-26
STS-26
STS-26 was the 26th NASA Space Shuttle mission and the seventh flight of the Discovery orbiter. The mission launched from Kennedy Space Center, Florida, on 29 September 1988, and landed four days later on 3 October. STS-26 was declared the "Return to Flight" mission, being the first mission after...
in 1988, STS-114
STS-114
-Original crew:This mission was to carry the Expedition 7 crew to the ISS and bring home the Expedition 6 crew. The original crew was to be:-Mission highlights:...
in 2005, and STS-121
STS-121
STS-121 was a space shuttle mission to the International Space Station flown by Space Shuttle Discovery. The main purposes of the mission were to test new safety and repair techniques introduced following the Columbia disaster of February 2003 as well as to deliver supplies, equipment and...
in 2006. Discovery flew the third to the last mission of the Space Shuttle program, STS-133
STS-133
STS-133 was the 133rd mission in NASA's Space Shuttle program; during the mission, Space Shuttle Discovery docked with the International Space Station. It was Discoverys 39th and final mission. The mission launched on 24 February 2011, and landed on 9 March 2011...
, having launched on (NET) February 24, 2011. Endeavour flew aboard STS-134
STS-134
STS-134 was the penultimate mission of NASA's Space Shuttle program. The mission marked the 25th and final flight of . This flight delivered the Alpha Magnetic Spectrometer and an ExPRESS Logistics Carrier to the International Space Station. Mark Kelly served as the mission commander...
and Atlantis performed STS-135
STS-135
STS-135 was the final mission of the American Space Shuttle program. It used the orbiter Atlantis and hardware originally processed for the STS-335 contingency mission, which was not flown. STS-135 launched on 8 July and was originally scheduled to land on 20 July 2011, but the mission was...
, NASA's last Space Shuttle mission. On February 24, 2011, Space Shuttle Discovery launched from Kennedy Space Center's Launch Complex 39-A to begin its final orbital flight.

Discovery was featured in Transformers: Dark of the Moon. She was used as a booster vehicle for the Autobots' spacecraft Xantium when they were exiled from Earth, but Starscream
Starscream
Starscream is a fictional character in the Transformers franchise. He is one of the most prolific characters in the Transformers fictional work, appearing in almost all incarnations of the story. Starscream is usually portrayed with the same characterization...
shot her down and destroyed her.