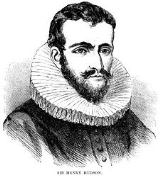 Overview
Henry Hudson was an English sea explorer and navigator
Navigator
A navigator is the person on board a ship or aircraft responsible for its navigation. The navigator's primary responsibility is to be aware of ship or aircraft position at all times. Responsibilities include planning the journey, advising the Captain or aircraft Commander of estimated timing to...
in the early 17th century.

Hudson made two attempts on behalf of English merchants to find a prospective Northeast Passage to Cathay
Cathay
Cathay is the Anglicized version of "Catai" and an alternative name for China in English. It originates from the word Khitan, the name of a nomadic people who founded the Liao Dynasty which ruled much of Northern China from 907 to 1125, and who had a state of their own centered around today's...
(today's China) via a route above the Arctic Circle
Arctic Circle
The Arctic Circle is one of the five major circles of latitude that mark maps of the Earth. For Epoch 2011, it is the parallel of latitude that runs north of the Equator....
. Hudson explored the region around modern New York metropolitan area
New York metropolitan area
The New York metropolitan area, also known as Greater New York, or the Tri-State area, is the region that composes of New York City and the surrounding region...
while looking for a western route to Asia under the auspices of the Dutch East India Company
Dutch East India Company
The Dutch East India Company was a chartered company established in 1602, when the States-General of the Netherlands granted it a 21-year monopoly to carry out colonial activities in Asia...
. He explored the river which eventually was named for him
Hudson River
The Hudson is a river that flows from north to south through eastern New York. The highest official source is at Lake Tear of the Clouds, on the slopes of Mount Marcy in the Adirondack Mountains. The river itself officially begins in Henderson Lake in Newcomb, New York...
, and laid thereby the foundation for Dutch colonization
New Netherland
New Netherland, or Nieuw-Nederland in Dutch, was the 17th-century colonial province of the Republic of the Seven United Netherlands on the East Coast of North America. The claimed territories were the lands from the Delmarva Peninsula to extreme southwestern Cape Cod...
of the region.

Hudson discovered a strait
Hudson Strait
Hudson Strait links the Atlantic Ocean to Hudson Bay in Canada. It lies between Baffin Island and the northern coast of Quebec, its eastern entrance marked by Cape Chidley and Resolution Island. It is long...
and immense bay
Hudson Bay
Hudson Bay , sometimes called Hudson's Bay, is a large body of saltwater in northeastern Canada. It drains a very large area, about , that includes parts of Ontario, Quebec, Saskatchewan, Alberta, most of Manitoba, southeastern Nunavut, as well as parts of North Dakota, South Dakota, Minnesota,...
on his final expedition while searching for the Northwest Passage
Northwest Passage
The Northwest Passage is a sea route through the Arctic Ocean, along the northern coast of North America via waterways amidst the Canadian Arctic Archipelago, connecting the Atlantic and Pacific Oceans...
.

Where did henry hudson land in 1607

What country did henry hudson sail for?

what area and location did he explore?
More

Can someone give me an article about henry hudson which has what he did that impacted america or what he did for america? pleaseeeeeeee helpppppppp ne...