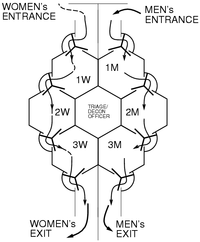 Decontamination is the process of cleansing the human body
Body cleansing
Detoxification is an alternative medicine approach that proponents claim rids the body of "toxins", accumulated harmful substances that are alleged to exert undesirable effects on individual health...
to remove contamination
Contamination
Contamination is the presence of a minor and unwanted constituent in material, physical body, natural environment, at a workplace, etc.-Specifics:"Contamination" also has more specific meanings in science:...
by hazardous materials
Dangerous goods
Dangerous goods are solids, liquids, or gases that can harm people, other living organisms, property, or the environment. They are often subject to chemical regulations. "HazMat teams" are personnel specially trained to handle dangerous goods...
including chemicals, radioactive substances
Radioactive contamination
Radioactive contamination, also called radiological contamination, is radioactive substances on surfaces, or within solids, liquids or gases , where their presence is unintended or undesirable, or the process giving rise to their presence in such places...
, and infectious material
Infectious disease
Infectious diseases, also known as communicable diseases, contagious diseases or transmissible diseases comprise clinically evident illness resulting from the infection, presence and growth of pathogenic biological agents in an individual host organism...
. Decontamination is sometimes abbreviated as "decon", "dcon" or "decontam".

Persons suspected of being contaminated are usually separated by sex, and led into a decon tent, a decon trailer, or a decon pod, where they shed their potentially contaminated clothes in a strip-down room. Then they enter a wash-down room where they are showered. Finally they enter a drying and re-robing room to be issued clean clothing, or a white Tyvek
Tyvek
Tyvek is a brand of flashspun high-density polyethylene fibers, a synthetic material; the name is a registered trademark of DuPont. The material is very strong; it is difficult to tear but can easily be cut with scissors or a knife...
jumpsuit, or the like. Some more structured facilities include six rooms (strip-down, wash-down and examination rooms, for each of men's and women's side). Some facilities, such as Modecs, and many others, are remotely operable, and function like "human car wash
Car wash
A car wash or auto wash is a facility used to clean the exterior and, in some cases, the interior of motor vehicles.- Categories :...
es". The ACI
Airports Council International
Airports Council International is the association of the world’s airports. It is a non profit organization, whose prime purpose is to advance the interests of airports and to promote professional excellence in airport management and operations...
World Aviation Security Standing Committee describes a decontamination process thus, specifically referring to plans for Los Angeles
Los Ángeles
Los Ángeles is the capital of the province of Biobío, in the commune of the same name, in Region VIII , in the center-south of Chile. It is located between the Laja and Biobío rivers. The population is 123,445 inhabitants...
authorities:

Decontamination Exercises are frequently used to test the preparedness of emergency plans and personnel.

Exercises are of three types: 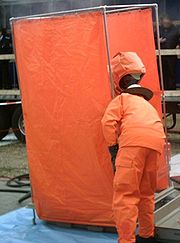 Collaboration among various levels of authority, and among various countries, is required to address bioterror threats, because contamination knows no boundaries. Disease and contamination do not stop at the border from one country to another. Thus organizations such as NATO, bring together member countries to practice how to contain an outbreak, setup quarantine
Quarantine
Quarantine is compulsory isolation, typically to contain the spread of something considered dangerous, often but not always disease. The word comes from the Italian quarantena, meaning forty-day period....
facilities, and care for displaced persons.


Collection of personal belongings for evidence

Dofficers (Decontamination officers in the "doffing" or disrobing area) are often police or military personnel, ready to handle potentially unruly persons who refuse to cooperate with first responders.

For example, the U.S. ARMY SOLDIER AND BIOLOGICAL CHEMICAL COMMAND suggests that:

"The entire incident is a crime scene requiring the collection of criminal evidence and suspicious victim belongings. The preservation of a proper chain of custody must be maintained for all evidence. ... patients could be suspects and their belongings may be evidence. ... Direct patients through a detailed decontamination process and deal with potentially unruly patients. ... Enforce order when persons become uncooperative when asked to remove clothing and relinquish personal items.".

Paul Rega, M.D., FACEP
FACEP
Fellow of the American College of Emergency Physicians, or FACEP, is a post-nominal title used to indicate that an emergency physician's education and training, professional qualifications, and ethical conduct have passed a rigorous evaluation, and have been found to be consistent with the high...
, and Kelly Burkholder-Allen also note, in "The ABCs of Bioterrorism" an additional advantage in decontaminating everyone found at the scene of an incident, because this will help the authorities in searching through everyone's clothes to find suspicious items:

"Removal of clothing in the decon procedure has the additional advantage of detecting weapons or a secondary device on a victim or"pseudo-victim.""

Chris Seiple, in "Another Perspective on the Domestic Role of the Military in Consequence Management" suggests that the evidence gathering process of identifying contaminated people and their belongings should also include the process of video surveillance:

The identification of contaminated victims and their personal effects... Victims are also videotaped as they proceed through the decontamination line.

Video Surveillance... Videotaped documentation could later be used in the evidence processes;

Although there are the obvious privacy
Privacy
Privacy is the ability of an individual or group to seclude themselves or information about themselves and thereby reveal themselves selectively...
concerns in surveillance, one can also argue that due to the high risk nature of terrorism, such surveillance is warranted, as it is in other high risk areas like bathing complexes
Bathing
Bathing is the washing or cleansing of the body in a fluid, usually water or an aqueous solution. It may be practised for personal hygiene, religious ritual or therapeutic purposes or as a recreational activity....
where surveillance is often used because of the risk of drowning
Pool safety camera
Pool Safety Cameras are video monitoring systems designed to reduce drowning deaths in public and private pools.-Classification:Aquatics video monitoring systems are broken into two categories:* Passive* Active...
. In these cases the importance of safety may often be thought to outweigh privacy concerns.

One of the elements that separates a drill from a real-life situation is dealing with panic
Panic
Panic is a sudden sensation of fear which is so strong as to dominate or prevent reason and logical thinking, replacing it with overwhelming feelings of anxiety and frantic agitation consistent with an animalistic fight-or-flight reaction...
ked or uncooperative victims.

In a real attack, the perpetrators may be among the victims, or some of the victims may be in possession of contraband, or of evidence that might help law enforcement in solving the crime.

Another consideration is that some of the perpetrator victims might refuse to go through decon because this would result in discovery of the contraband they may be hiding.

For example, a person with explosives strapped to his or her body, under their clothing, would likely not be so willing to take it off. Such a victim might try to escape, and need to be restrained for decon.

Separate male and female dofficers (decon officers) deal with potentially unruly patients, by restraining the hands using flex cuffs, and cutting off the shirt, then removing shoes and pants normally. This usually requires a couple of officers.

The Belfast Telegraph describes such a situation:

"...holds back hundreds of extras playing traumatised bomb victims. Coated in ash and wrapped up in bandages, these people are staggering around, dazed and confused, like so many shell-shocked World War I
World War I
World War I , which was predominantly called the World War or the Great War from its occurrence until 1939, and the First World War or World War I thereafter, was a major war centred in Europe that began on 28 July 1914 and lasted until 11 November 1918...
soldiers. While troops in riot gear charge forward to reinforce the cordon and use their shields and batons to beat back ... desperately appeal for calm. They ask people to file in an orderly fashion towards the decontamination units being rapidly assembled by fire fighters in inflated orange Chemical Biological Radiation Nuclear (CBRN) suits."

They bring a law enforcement agency group with them and they have no problem if somebody needs to be restrained with handcuffs or flex cuffs or whatever to keep them from going from the hot zone to a cool zone; whereas the fire department, we are not geared to do that.... KWAME HOLMAN: Colonel Hammes says his Marines are trained to handle uncooperative people. ... If they're really hysterical, there's some simple techniques from this program called Marine Martial Arts, that teaches various martial arts skills; there are common techniques that police also use to provide pain compliance-- no permanent damage, just enough to get your attention, and allows us to control you. If you still won't, then we can control in flex cuffs, and then we'll flex cuff decontaminate you. And if you're calm at that point, we turn you loose. If you're still not calm, then the police will be asked to give us a hand.

The largest obstacle to mass
... is the potential for public
panic and hysteria.
...
Mass decontamination often requires
police, security, and close joint force
collaboration to control the potential
mass panic and keep order.
...
Consider the large number of people
fleeing from the 11 September
attacks in the New York City. These
individuals were forcibly detained so fire
and emergency services could
decontaminate and control the potential
cross contamination
...
Their shoes, clothing, jewellery and
other personal effects were seized from
them, and the contaminated people were
washed and given replacement clothing.
...
During a mass decontamination event, hundred
or thousands of hysterical victims would
quickly overwhelm the system and mass
panic would ensue