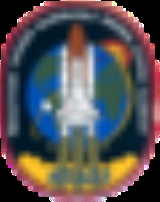 Encyclopedia
{| style="float: right; clear: right; background-color: transparent; margin-left: 1em"
|
STS-63 was the second mission of the US/Russian Shuttle-Mir Program
Shuttle-Mir Program
The Shuttle–Mir Program was a collaborative space program between Russia and the United States, which involved American Space Shuttles visiting the Russian space station Mir, Russian cosmonauts flying on the shuttle and an American astronaut flying aboard a Soyuz spacecraft to engage in...
, which carried out the first rendezvous of the American Space Shuttle
Space Shuttle
The Space Shuttle was a manned orbital rocket and spacecraft system operated by NASA on 135 missions from 1981 to 2011. The system combined rocket launch, orbital spacecraft, and re-entry spaceplane with modular add-ons...
with Russia's space station Mir
Mir
Mir was a space station operated in low Earth orbit from 1986 to 2001, at first by the Soviet Union and then by Russia. Assembled in orbit from 1986 to 1996, Mir was the first modular space station and had a greater mass than that of any previous spacecraft, holding the record for the...
. Known as the 'Near-Mir' mission, the flight used Space Shuttle Discovery
Space Shuttle Discovery
Space Shuttle Discovery is one of the retired orbiters of the Space Shuttle program of NASA, the space agency of the United States, and was operational from its maiden flight, STS-41-D on August 30, 1984, until its final landing during STS-133 on March 9, 2011...
, which lifted off from launch pad 39B
Kennedy Space Center Launch Complex 39
Launch Complex 39 is a rocket launch site at the John F. Kennedy Space Center on Merritt Island in Florida, USA. The site and its collection of facilities were originally built for the Apollo program, and later modified to support Space Shuttle operations. NASA began modifying LC-39 in 2007 to...
on 3 February 1995 from Kennedy Space Center
Kennedy Space Center
The John F. Kennedy Space Center is the NASA installation that has been the launch site for every United States human space flight since 1968. Although such flights are currently on hiatus, KSC continues to manage and operate unmanned rocket launch facilities for America's civilian space program...
, Florida. A night launch and the 20th mission for Discovery, it marked the first time a Space Shuttle mission had a female pilot, Eileen Collins
Eileen Collins
Eileen Marie Collins is a retired American astronaut and a retired U.S. Air Force Colonel. A former military instructor and test pilot, Collins was the first female pilot and first female commander of a Space Shuttle. She was awarded several medals for her work. Col. Collins has logged 38 days 8...
, and carried out the successful deployment and retrieval of the Spartan-204 platform, along with the scheduled rendezvous and flyaround of Mir, in preparation for STS-71
STS-71
STS-71 was the third mission of the US/Russian Shuttle-Mir Program, which carried out the first Space Shuttle docking to Mir, a Russian space station. The mission used Space Shuttle Atlantis, which lifted off from launch pad 39A on 27 June 1995 from Kennedy Space Center, Florida...
, the first mission to dock with Mir.

STS-63's primary objective was to perform a rendezvous and fly around the Russian space station Mir. The objectives of the Mir Rendezvous/Flyby were to verify flight techniques, communications and navigation aid sensor interfaces, and engineering analyses associated with Shuttle/Mir proximity operations in preparation for the STS-71 docking mission.

Other objectives of the flight were to perform the operations necessary to fulfill the requirements of experiments located in SPACEHAB
SPACEHAB
Astrotech Corporation , formerly Spacehab Inc., is an aerospace company headquartered in Austin, Texas which provides commercial space products and services to NASA, the U.S. Department of Defense, international space agencies, and global commercial customers...
-3 and to fly captively, then deploy and retrieve the Spartan-204 payload. Spartan-204, the Shuttle Pointed Autonomous Research Tool for Astronomy, was a free-flying retrievable platform. It was designed to obtain data in the far ultraviolet region of the spectrum from diffuse sources of light. Two crewmembers were scheduled to perform a five hour spacewalk.

Beginning on flight day one, series of thruster burns were performed daily to bring Discovery in line with Mir. Original plan called for the orbiter to approach to no closer than 10 meters (33 ft) from Mir, and then complete a flyaround of the Russian space station. However, three of the 44 orbiter Reaction Control System (RCS) thrusters—small firing jets used for on-orbit maneuvering—sprang leaks prior to rendezvous. Shortly after main engine cutoff, two leaks occurred in the aft primary thrusters, one of which—called R1U—was key to rendezvous. A third leak occurred later in flight in the forward primary thruster, but the crew was able to fix the problem.

After extensive negotiations and technical information exchanges between U.S. and Russian space teams, Russians concluded close approach could be safely achieved and the STS-63 crew was given 'go' to proceed. R1U thruster manifold was closed and the backup thruster was selected for the approach. Ship-to-ship radio contact with Mir was achieved well ahead of time, and Titov, who had previously lived on Mir for more than a year, communicated excitedly with the three cosmonauts aboard the space station: Mir 17 Commander Alexander Viktorenko
Alexander Viktorenko
Aleksandr Stepanovich Viktorenko is a Soviet cosmonaut. He was born in Olginka, North-Kazakhstan Oblast, Kazakh SSR on March 29, 1947. He is married with two children....
; Flight Engineer Yelena Kondakova
Yelena Kondakova
Yelena Vladimirovna Kondakova was the third Soviet/Russian female cosmonaut to travel to space and the first woman to make a long-duration spaceflight. Her first trip into space was on Soyuz TM-20 on October 4, 1994. She returned to Earth on March 22, 1995 after a five-month stay at the Mir space...
; and Valery Polyakov, a physician who had broken Titov's record for extended time in space. After stationkeeping at a distance of 122 metres (400.3 ft) from Mir and with Wetherbee manually controlling the orbiter, Discovery was flown to 11 metres (36.1 ft) from the Russian space station. "As we are bringing our spaceships closer together, we are bringing our nations closer together," Wetherbee said after Discovery was at point of closest approach. "The next time we approach, we will shake your hand and together we will lead our world into the next millennium." 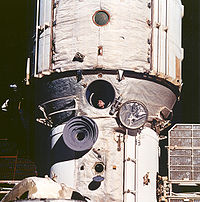 "We are one. We are human," Viktorenko responded. Wetherbee then backed away to 122 metres (400.3 ft) and performed one and a quarter-loop flyaround of Mir while station was filmed and photographed. The Mir crew reported no vibrations or solar array movement as result of the approach.

The crew also worked extensively with payloads aboard Discovery. Flying in forward payload bay and activated on flight day one was SPACEHAB-3. The commercially-developed module was making its third flight on the Shuttle and carried 20 experiments: 11 biotechnology experiments, three advanced materials development experiments, four technology demonstrations and two pieces of supporting hardware measuring on-orbit accelerations. Improvements had been made to the SPACEHAB system to reduce demand on crew time. A new video switch had been added to lessen the need for astronaut involvement in video operations, and an experiment interface had been added to the telemetry system to allow the experiment investigator to link directly via computer with the onboard experiment to receive data and monitor status. Charlotte, an experimental robotic device being flown for first time, also reduced crew workload by taking over simple tasks such as changing experiment samples.

Among plant growth experiments were Astroculture, flying for fourth time on Shuttle. The objective of Astroculture was to validate performance of plant growth technologies in the microgravity environment of space for application to a life support system in space. The investigation had applications on Earth, since it covered such topics as energy-efficient lighting and removal of pollutants from indoor air. One of the pharmaceutical experiments, Immune, also had Earth applications. Exploiting a known tendency of spaceflight to weaken the immune system, Immune experiment tested the ability of a particular substance to prevent or reduce this weakening. Clinical applications could include treatment of individuals suffering from such immunosuppressant diseases as AIDS.

On flight day two, the crew deployed the Orbital Debris Radar Calibration System-II (ODERACS-II) to help characterize orbital debris environment for objects smaller than 10 centimeters (about four inches) in diameter. Complement of six target objects of known dimensions and with limited orbital lifespans released into orbit and tracked by ground- based radars, allowing precise calibration of radars so they can more accurately track smaller pieces of space debris in low Earth orbit.

Also on flight day two, the crew lifted with the orbiter remote manipulator system arm the SPARTAN-204 from its support structure in payload bay. SPARTAN remained suspended on arm for observation of orbiter glow phenomenon and thruster jet firings. SPARTAN-204 was later released from the arm to complete about 40 hours of free-flight, during which time its Far Ultraviolet Imaging Spectrograph instrument studied celestial targets in the interstellar medium, the gas and dust which fills the space between the stars and which is the material from which new stars and planets are formed.

SPARTAN-204 was also used for extravehicular activity (EVA) near end of the flight. Foale and Harris began their EVA suspended at the end of the robot arm, away from the payload bay, to test modifications to their spacesuits to keep spacewalkers warmer in the extreme cold of space. The two astronauts were then scheduled to practice handling the approximately 2,500 pound (1100 kilograms (2,425.1 lb)) SPARTAN to rehearse space station assembly techniques, but both astronauts reported they were becoming very cold—this portion of the spacewalk being performed during a night pass—and mass handling was curtailed. This 29th Shuttle spacewalk lasted 4 hours, 38 minutes. Harris became the first African-American to walk in space.

The six rays of the sun and the three stars on the right of the insignia symbolize the flight's numerical designation in the Space Transportation System's mission sequence.